Paul George has increased his scoring output in every game this series against the Dallas Mavericks, including a 29-point performance in Friday's Game 3 victory.

If you think Luka Doncic’s neck injury has the Dallas Mavericks worried, his unknown status is a nightmare scenario for those setting the NBA betting lines.

Oddsmakers know a Doncic absence would swing the Mavericks’ spread 10 or more points for Sunday’s Game 4 versus the Los Angeles Clippers, but the current line of Dallas +3 suggests that books expect the star guard to play. The Clippers battled back from an early hole in Game 3 to slim the Mavs’ series lead to 2-1, with the road team winning all three games so far.

Check out free NBA picks and predictions for Clippers vs. Mavericks on May 30.

The Clippers are 7-2 ATS in their last nine games in Dallas. Find more NBA betting trends for Clippers vs. Mavericks.

The Clippers may have been down 0-2 heading into Game 3 on Friday but the pressure seemed to be mounting on the Mavericks to put L.A. on the ropes after stealing the first two games on the road. Dallas didn’t respond well to that and, outside of Doncic scoring 44 points, looked nothing like the team that shot out the lights inside the Staples Center.

Give some credit to the Clippers for making adjustments. Ty Lue rolled out smaller lineups than in the previous two games, especially in the second half where he leaned on 6-foot-9 Nicolas Batum at the center position. That allowed L.A. to be more fleet-footed on both ends and Mavs 7-footer Kristaps Porzingis was forced into post-ups in order to exploit size mismatches... but he doesn’t play big in the blocks.

Los Angeles also made a clear decision to clamp down on Dallas’ other contributors, assigning Kawhi Leonard to Tim Hardaway Jr., who finished with only 12 points after posting a collective 49 in the first two games of the series. Luka got his — shooting 15 for 28 — but the rest of the Mavericks were a dismal 39.6 percent from the field.

Doncic did look labored down the stretch, but who wouldn’t after touching the ball as much as he has in the opening three games? His neck injury is a factor but these types of disc issues are more a problem when the athlete stops moving, as we’ve seen with Luka complaining of pain at the halftime break and end of games. If he plays — and the current odds suggest he will — expect another strong effort from one of the top young stars in the league. And it appears the Clips’ current defense stance is OK with that.

As for the rest of the Mavericks, if they weren’t feeling the pinch in Game 3, they definitely are now as the fingers point their way heading into Sunday’s showdown. Los Angeles finally displayed some toughness and character, digging itself out of that early 12-point hole on Friday, and appears to at least have a blueprint for slowing down Dallas.

We’re laying the points with the visitor as well as getting ahead of any sudden injury updates on Doncic.

The Clippers went smaller in the second half of Game 3 and we expect Coach Lue to keep that look in Game 4. Los Angeles spaced the floor well and exploited a Mavericks defense that hasn’t really shown up in the playoffs, with L.A. owning an offensive rating of 125.7 for the postseason.

Leonard and Paul George reminded everyone that they’re one of the top one-two punches in the league, combining for 65 points on nearly 69 percent shooting, including going 5 for 11 from deep. Dallas doesn’t have any one-on-one options for those guys, and the Mavs will be hesitant to attach a hobbled Luka to either one of them in Game 4.

The total for tonight's matchup is back over the 220-point plateau after sinking sub-220 in Games 2 and 3 — both resulting in Over winners. The Mavericks can’t shoot much worse from the field, so there should be an uptick on that end and Dallas continues to leave points at the line, going 12 for 18 on foul shots in Game 4 and 66 percent from the stripe for the series.

There are more points to squeeze out of these teams, who top the advanced offensive rating metric for the NBA Playoffs despite playing the slowest pace of any first-round series.

Paul George is doing his best to kill off his infamous “Playoff P” persona, shooting 53 percent for the series and upping his point production in each game so far, including 29 points on 11-for-18 shooting on Friday.

Leonard led the way for L.A. in Game 3 but did see his focus shift to defense in an attempt to shut down Dallas’ role players. I do expect the tempo to climb in Game 4 and for the Mavs to make some shots, which means the Clippers need to go blow-for-blow with this shaky Dallas defense.

George’s point total is sitting at 25.5 points, which seems low considering the Mavs don’t have dedicated defenders to slow down the Clips’ top weapons — and their best defensive option, Maxi Kleber, is fighting through an ankle injury. PG’s 3-point shooting hasn’t been great but he’s making up for those misses by getting to the line and cashing in those freebies, shooting a perfect 13 for 13 from the stripe in the series.

Did you know that if you parlayed today’s NBA Clippers vs. Mavericks picks, you could win $56.82 on a $10 bet? 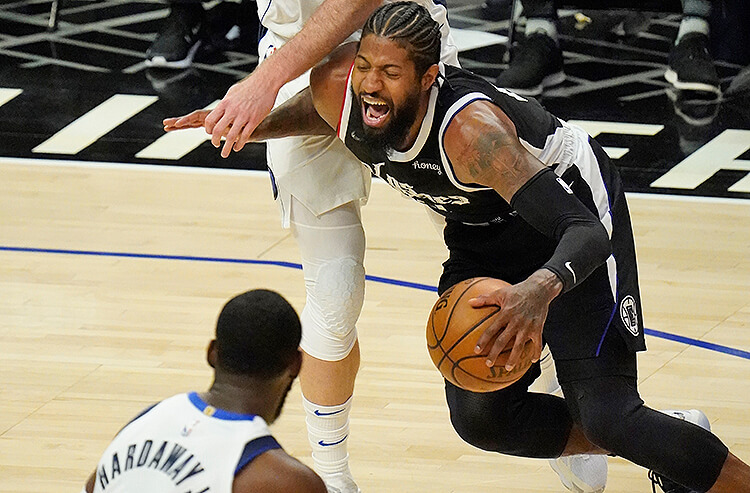