Spurs vs Knicks Picks and Predictions: Neither Team Will Want To Run

The Knicks' snail-like pace meets a shorthanded Spurs team finishing off a long road trip with a back-to-back. That sounds like the perfect recipe for betting the Under — especially in the first half, as highlighted in our NBA betting picks.

The New York Knicks open the doors of basketball’s Mecca to the visiting San Antonio Spurs on Monday, with that Western Conference opponent coming off a grueling overtime loss to the Brooklyn Nets the day before.

The NBA betting odds have New York installed as a 6.5-point home favorite, fresh from a home-and-home series split with the Boston Celtics. The Knicks picked up a win over the Celtics inside MSG last Thursday and are 4-1 ATS in their last five home stands.

Check out our free NBA picks and predictions for Spurs at Knicks on January 10.

New York opened as 6.5-point home chalk and slimmed to -6 briefly before buyback on the Knicks moved the spread back to the opener. The total hit the board at 214.5 points and dropped as low as 212.5 before settling in at 213.5 points.

The Under is 8-2 in Knicks’ last 10 games as home favorites. Find more NBA betting trends for Spurs vs. Knicks.

Spurs vs Knicks picks and predictions

The Spurs have the schedule and COVID working against them Monday. San Antonio was already running on empty with the roster missing plenty of key support players in health and safety protocol, and then put in extra minutes in a hard-fought 121-119 overtime loss to the Nets across town Sunday afternoon.

This run-in with the Knicks is the final leg of a seven-game road trip, which started on New Year’s Eve in Memphis. The Spurs have lost all but one of those first six games — while covering the spread just twice — and considering how short their support is, they could very well be looking past the Knicks and towards a return home later this week.

The Spurs fight inside for buckets around the rim, ranked out as one of the top teams in points in the paint, but take on a New York defense that tightens up inside, checking foes to just under 42 points in the paint per outing while limiting those opponents to 40.4% shooting in the key. The potential return of center Nerlens Noel (conditioning) adds another lengthy interior defender for the Knicks, with his ability to alter and block shots.

New York and San Antonio met not that long ago, with the Spurs losing 121-109 at home on December 7. The Knicks gave up 54 points in the paint but dominated the glass, out-rebounding San Antonio 52-43. On the season, New York sits 10th in rebound percentage and with the Spurs’ legs lacking energy on the second of back-to-back games (with an overtime), San Antonio will see plenty of shots hitting the front of rim Monday night.

The status of Evan Fournier and Kemba Walker will shake up this spread, but even if those scoring talents are limited, New York can grind out a home win against a road-weary opponent.

This non-conference clash is a mismatch in pace, with New York running the most methodical offense in the NBA (95.61 pace rating) and San Antonio pushing the fourth fastest tempo (100.55) in the league. Well, when they’re not shorthanded and playing a second straight game.

During this current road trip, the Spurs’ offensive pace has gradually declined, slumping to 98.09 over the last three showings. Had it not been for overtime in Brooklyn yesterday afternoon, San Antonio would bring a 0-3 Over/Under streak into Madison Square Garden.

The Spurs aren’t a bulk 3-point shooting team — even after knocking down 13 of 32 from outside in the loss to Brooklyn — averaging less than 11 triples per road game. As for New York’s perimeter threats, it could be down two of its main marksmen if Fournier and Walker sit/are limited.

Things could get funny in the home stretch of this game, so we’re keeping our best bet contained to the first 24 minutes of action. As mentioned above, the Knicks run in sand on offense and the Spurs have seen their tempo take a tumble in the last three and are now playing on short rest off an overtime game they really wanted to win.

The Spurs are one of the better first-half producers in the league, averaging 56.5 points in the opening two quarters, but have exceeded that mark only once in their last four games. As for New York, it manages a measly 52.6 points per first half on the season and could be without some offensive spark plugs Monday.

Books are leaning toward more scoring in the first 24 minutes, setting the 1H Over/Under at 109, but this is going to be an ugly, grinder of a game from the tip.

Did you know that if you parlayed today’s NBA Spurs vs. Knicks predictions and picks in a single-game parlay, you could win $59.58 on a $10 bet? 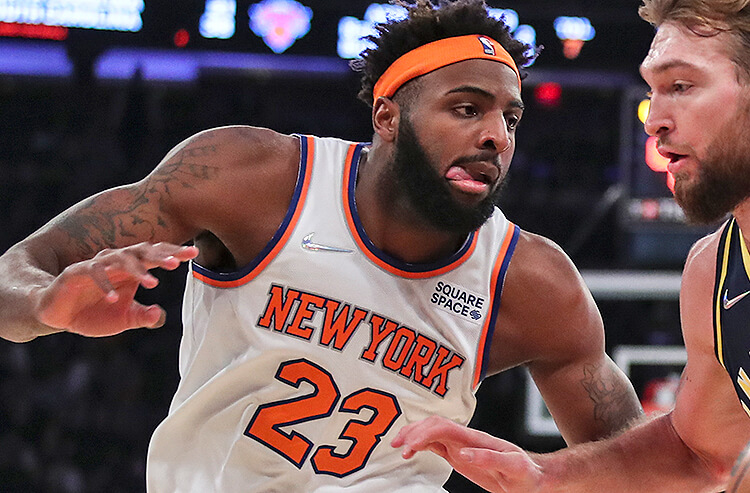 Spurs vs Knicks Picks and Predictions: Neither Team Will Want To Run
Provided by