Bucks vs Hornets Picks and Predictions: Charlotte Buzzes By Milwaukee Yet Again

The Bucks just had a lackluster effort — on offense and defense — with a shorthanded roster against the Charlotte Hornets. Milwaukee plays them for the second straight game — and guess what? Our NBA betting picks expect another subpar effort again.

The defending champion Milwaukee Bucks have looked like a deer in the headlights after losing three of their last four games.

Things won’t get any easier tonight for the Bucks as they’ll be without one of their best defenders when they take on one of the NBA’s most high-octane offenses in the Charlotte Hornets for the second straight game.

Can Buzz City win its second straight against the Bucks as NBA betting slight underdogs? Find out in our free NBA picks and predictions for Bucks vs. Hornets on Monday, January 10.

The Bucks opened this matchup as high as 3-point favorites depending on the book but are down to -2 at most shops as of Monday afternoon. The total has seen a little more action but even a high opening number of 234.5 couldn’t stop Over betters, moving the Over/Under up to 236.5.

The Hornets are 7-1 ATS in their last eight games as a home underdog. Find more NBA betting trends for Bucks vs. Hornets.

Bucks vs Hornets picks and predictions

The Bucks have lost three of four and will now have to try and slow down the high-flying Hornets without one of their best defenders in Jrue Holiday. In fact, the Bucks could be without several of their perimeter defenders including Grayson Allen, Pat Connaughton, and George Hill.

While those guys do a great job in supporting Giannis Antetokounmpo when it comes to scoring, those absences have really hurt them on the other end of the floor. The Bucks rank 22nd in defensive rating over their last four games and are allowing opponents to shoot 46.4% from the floor over that span.

That could mean trouble going against one of the best shooting teams in the NBA. The Hornets rank second in the NBA in scoring, offensive rating, and 3-point shooting percentage — and enter this game having won five of their last seven contests. And Charlotte took advantage of the Bucks' lack of perimeter defenders in Saturday’s meeting, hitting 16 threes in that matchup.

While Antetokounmpo and Khris Middleton had great games in that last meeting, going for 43 and 27 points, respectively, Milwaukee’s lack of depth really showed in the loss as the rest of the team shot just 15 of 54 (27%).

Expect the Hornets to ride their guard play with LaMelo Ball and Terry Rozier leading the way and while Giannis might get his against a questionable Hornets defense, the same can’t be said for most of his teammates, making this probably a closer game than it should be.

When it comes to the total, my gut reaction to a matchup between the Bucks and Hornets — where Jrue Holiday won’t be playing — was Over all the way. But this number is just so high that we’re going to have to lean the other direction.

The total in Saturday’s meeting was a similar 235.5 and fell Under by 15.5 points. And while some will say there is no way the Bucks shoot that poorly against this Hornets defense again, well, they are a good shooting team because they have guys like Holiday, Allen, and Connaughton. Giannis went off in this last meeting, as did Middleton, and the Bucks still only put up 106 points.

And while Charlotte’s offense can create a buzz, they can also be identified as being streaky. Essentially though, this number is high enough that the game can be high scoring and still fall Under the number.

It was Rozier who took advantage of Holiday's absence and went off from deep last game, going 6 of 10 from three. Tonight, we like his backcourt mate LaMelo Ball to be the one with the big night. Or at least cash the Over on his made threes prop.

Ball has had a solid year from beyond the arc, shooting 38.1% from 3-point range, but he certainly falls into the category of a streaky shooter. Case in point, he has hit three or more triples five times over his last 10 games. But getting plus money on him to do it tonight against a Bucks team short on defenders is a value too good to pass up.

Did you know that if you parlayed today’s NBA Bucks vs. Hornets predictions and picks in a single-game parlay, you could win $77.47 on a $10 bet? 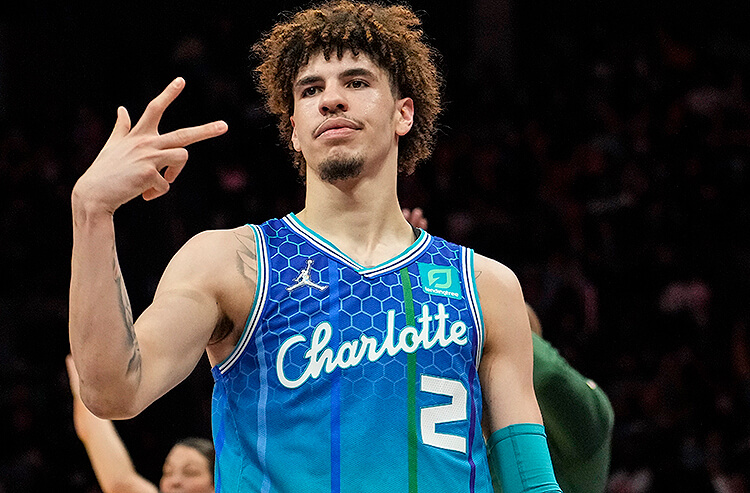 Bucks vs Hornets Picks and Predictions: Charlotte Buzzes By Milwaukee Yet Again
Provided by