We're kicking the weekend off on a winning note with Friday's NBA player prop picks! Get the best bets for tonight's action, including Jaren Jackson Jr to take advantage of the Kings' porous defense.

There's no better way to kick off the weekend than with some winning NBA player prop bets, and with eight games on the board, there is plenty of basketball betting value to be found.

Today, we focus on a pair of secondary stars who can step up in the absence of some big names, as Khris Middleton is expected to return for the Bucks and Jaren Jackson Jr. will try to keep the Grizzlies roaring.

Check out our NBA prop picks for Friday, December 17, as we bank on some of the NBA's best to do their thing.

Meet me in the Middle

It looks like the Milwaukee Bucks survived a scare with All-Star Khris Middleton. The sharpshooter hyperextended his knee on Monday against the Boston Celtics, but after resting it last game, Middleton is expected to suit up tonight against the New Orleans Pelicans.

That will be a welcome sight for the Bucks, as Giannis Antetokounmpo is still out due to the NBA’s health and safety protocols.

Middleton was in a groove before hurting his knee, going 13-30 (43.3%) from 3-point range over his previous three games, hitting at least four threes in each. He has also hit three or more threes in five of his last seven full games.

Now, he faces a Pelicans team with many problems. One of the biggest is defending the perimeter, ranking 27th in the NBA in opponent 3-point shooting percentage. I know the Bucks may not push Middleton too hard, but getting Over 2.5 threes at even money seems like a steal if he’s good to go.

From trade rumors surrounding superstar Dame Lillard, to now an untimely seven-game losing streak, things have gone from bad to worse for the Portland Trail Blazers. But one guy who the Blazers can always count on to put up a strong effort is swingman Norman Powell.

Powell has been trying to do all he can to help his team break out of this current funk. He's averaging 20.3 points during the losing streak but he is also doing work on the glass now as well, upping his rebounding average to 3.3 per game over that span.

Now, Powell and the Blazers will try to snap this seven-game slide when they welcome the Charlotte Hornets to town. While the Hornets' buzz revolves around their high-octane offense, they have really struggled on the boards.

Charlotte ranks 28th in the NBA in rebounding percentage and 29th in opponent rebounds per game. Powell has hauled in down four or more boards in four of his last seven games, which includes six apiece in each of his last two. He looks like a good bet to Over his rebounding total in this one.

Many thought that when Ja Morant got injured that the Memphis Grizzlies would take a slide down the standings. But the team has come together and won nine of 10 games in Morant’s absence. And one player who has really picked up his game has been Jaren Jackson Jr.

The Grizzlies' power forward has upped his scoring to 19.8 points per game while shooting 48.5 percent from the floor over that stretch. Jackson will try to keep rolling as he and the Grizz visit the Sacramento Kings on Friday night.

The Kings snapped a three-game losing streak with a win over the Washington Wizards on Wednesday, but they are still struggling on the defensive end of the floor. The Kings rank 28th in the NBA in defensive rating and 25th in opponent field goal percentage.

But the Kings have been really getting killed on the inside. Sacramento ranks dead last when it comes to opponent points in the paint. So, if Jackson isn’t feeling it from beyond the arc in this one, he should have an edge on the inside. Bet the Over on his points. 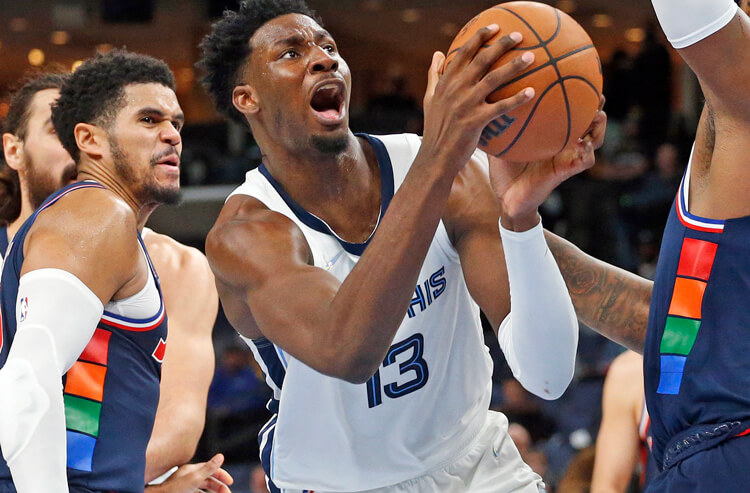