Chris Paul and Phoenix laid waste to Denver in the second half of Game 1, shutting down Nikola Jokic and preventing the supporting cast from keeping pace. Find out if they can ride the momentum for Game 2 with our Nuggets vs. Suns picks and predictions.

For all NBA bettors know, the Denver Nuggets are still in the locker room of Phoenix Suns Arena because they sure as hell didn’t come out at halftime in Game 1.

The Nuggets were blasted by 18 points in the final 24 minutes of Monday’s series opener after holding a one-point lead at the break. That second-half collapse has Denver as a 6-point road underdog versus the surging Suns in Game 2 of this Western Conference semifinal Wednesday.

Get our free NBA picks and predictions for Nuggets vs. Suns on June 9.

The Over is 21-8 in Nuggets’ last 29 games following a loss. Find more NBA betting trends for Nuggets vs. Suns.

Third-quarter ghosts have haunted Denver bettors all season, with the team owning a minus-1.3 margin in the third frame on the year – a significant soft spot for a team that boasts an average full-game margin of plus-4.4 (seventh-highest in the NBA).

But a piss-poor start to the second half isn’t the only thing that went sideways for Denver in Game 1. The Nuggets weren’t ready for the intensity Phoenix was bringing after a hard-hitting physical series against the Lakers. Phoenix’s defense disrupted the flow of Denver’s playbook and choked out MVP Nikola Jokic, limiting him to 22 points, but more importantly, just three assists.

This is nothing new for the Suns, who held foes to an average of less than 23 assists per game and only 0.567 assists per made field goal on the year. Add in the Nuggets’ missing backcourt staples, and Phoenix is a stick in the spokes of a Denver offense that relies on ball movement and assists, sitting ninth in assists/FGM (0.619) and fifth in average dimes per contest. Denver had 26 total assists on 42 made shots for the game, but only nine assists on 18 makes in the second half.

As for those guards holding the Nuggets’ backcourt together with duct tape and chewing gum, they just don’t show up every night. Austin Rivers has been solid at home but MIA inside opposing gyms and Monte Morris and Facundo Campazzo aren’t consistent nor facilitating the offense, with little to no depth behind them on the bench.

Phoenix’s offense finally broke free after being hounded by the Lakers’ elite defense in Round 1, most notably from behind the arc. The Suns shot just 32.5 percent from 3-point range for an average of just over 10 triples in the first five games of the postseason, but have made 31 for 69 from distance the past two outings.

I took Denver and the points in Game 1, putting faith in the Nuggets’ makeshift backcourt, and it looked good for 24 minutes. I expected a bit of a letdown from the Suns after banishing the former champs to Cancun, but Phoenix flexed and punched holes in this Nuggets team. I do think Denver can make this a series – especially if Will Barton or P.J. Dozier can return - but it won’t happen until it gets back to Colorado.

Before falling to second-half shambles on offense, the Nuggets were on pace for another strong offensive outing, scoring 58 points in the opening 24 minutes.

We saw a similar face plant in Game 1 versus Portland, when Denver held a 61-58 lead at half then managed only 48 points in the last two quarters. The Nuggets bounced back with a 128-point performance in Game 2 in that series and we’ll see a better offensive effort from Jokic & Co. on Wednesday.

Phoenix’s depth got the Game 1 total past the number and made up for a ho-hum opener from Devin Booker, who shot 8 for 12 for 21 points, but was 1 for 4 from beyond the arc. Without Barton in the lineup, the Nuggets lack a lockdown defender and their current thin guard corps is going to wear down fast if they’re chasing Booker, Chris Paul and Mikal Bridges around for 48 minutes.

Bad things happen at halftime for the Nuggets, so for this prop, we’ll stick to the first two frames. Denver played a hell of a half in Game 1 versus Phoenix, totaling 58 points on 53.2 percent shooting before the wheels came off beyond the break.

The Nuggets have been solid first-half scorers in the postseason, averaging 61.3 points on 51.4 percent shooting in the initial 24 minutes of action, then watch their production fall off a cliff like Wile E. Coyote. The Nuggets have averaged only 53.6 second-half points while shooting 42.3 percent in those final halves.

They rebounded from a rough second-half effort in Game 1 versus Portland with 73 points in the first half of Game 2. Phoenix is a much tougher test on defense than the Blazers but Denver’s 1H team total of 54.5 points is a slap in the face to the newly crowned MVP and a capable Denver attack. 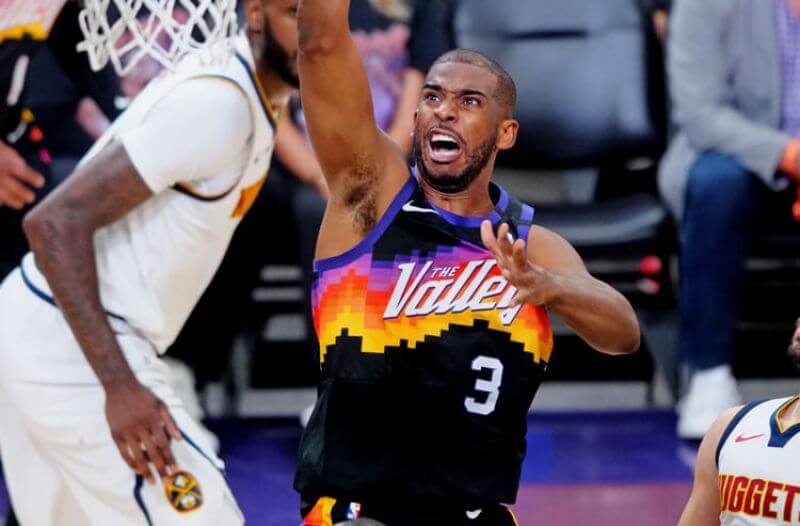 Nets vs Bucks Game 3 Picks and Predictions: Can Milwaukee Be Trusted As a Home Fave?
Jason Logan | Jun 10, 2021