The Brooklyn Nets will continue their road trip on Thursday night with a possible Finals preview, heading to Staples Center to take on the L.A. Lakers.

The high-powered Nets head into this clash as slight underdogs for NBA betting, pitting offense against defense. Which side of the floor will prevail? Check out our NBA free picks and predictions for Nets vs. Lakers on Thursday, February 18, with tipoff scheduled for 10:00 p.m. ET.

Over is 22-4 in Nets' last 26 overall. Find more NBA betting trends for Nets vs. Lakers.

Los Angeles opened -2.5 overnight at PointsBet USA, went to -2 early this morning, then this afternoon rose to -3, where the number sits as of 7:15 p.m. ET. "Nets-Lakers is getting the most action out of the three NBA games tonight. All eyes on the prime-time matchup," PointsBet USA's Wyatt Yearout said. "Good two-way action on the spread, with 51 percent of bets on the Lakers, while 55 percent of money is on the Nets." The total tumbled from 237.5 to 230, with ticket count 3/1 on the Over, but just 56 percent of money on the Over.

After a rough stretch of games that included a three-game losing streak, the Nets appear to have finally clicked. Brooklyn has been rolling this past week and is currently riding a four-game winning streak SU and ATS, including a dominant win over the Warriors on Saturday, while their gutty comeback in Phoenix was among their best performances of the year.

Though they will be without Anthony Davis for the next while, the Lakers remain on cruise control. At 22-7, they're behind just the Jazz in the Western Conference, a game up on their cross-hall rivals the Clippers. As is the case with any LeBron team, of course, L.A. still has another level — or several — to go up when the playoffs arrive. Until then, they will simply continue to roll toward home-court advantage and possibly, another MVP for James.

Unsurprisingly, we're dealing with a small spread in a matchup of two of the NBA's best teams. With Davis out, James will need a teammate to step up to help and combat the firepower Brooklyn boasts. L.A. has the strong team D to contain Brooklyn, and with the Nets playing their fourth straight road game, we'll take the defending champs to cover.

By now, we know the Nets' story. It's one of little defense and a whole lot of scoring. In their last 24 games, Brooklyn is 21-3 O/U, a stretch that includes a handful of legitimately good defenses on the other side, including the Suns on Tuesday — a game in which they helped exceed the Over by 25.5 points. They'll now face perhaps the best defense in the league, visiting the defending champions.

However, for all the praise the Lakers receive for their work on the defensive end of the floor, they aren't completely adverse to track meets, with an 11-18 O/U on the year. Without Davis, a perennial Defensive Player of the Year contender and the guy credited for reawakening James on that side of the floor, they are 3-3 O/U this season. The three Unders, however, were against a pathetic Wolves team who were without Karl-Anthony Towns, the Pistons, and Minnesota again.

L.A., particularly without Davis, can be dragged into high-scoring games — and with James Harden and Kyrie Irving gunning on the other side, that's exactly what we think will happen on Thursday night.

The combination of Brookyn's stars' affinity for DeAndre Jordan and Jarrett Allen's trade to the Cavaliers has led to the Nets being completely hamstrung at center, stuck with a rapidly-aging Jordan starting and playing heavy minutes. Jordan has become a shell of his former self in recent years, as the former Lob City co-headliner now lacks the quickness and explosiveness that made him the devastating lob threat and rim protector he once was.

Jordan's presence in Brooklyn's starting five looms almost as large as the absence of Davis in the Lakers' lineup. However, it will also present an excellent matchup for Montrezl Harrell, the reigning Sixth Man of the Year. Harrell's one of the NBA's best rolling bigs, with his brash personality completely personified in the way he steamrolls to the basket after setting a pick. L.A. will happily put Jordan in a blender over and over again on Thursday night, forcing DJ into space before he is left in Harrell's dust as the Lakers' big man heads to the hole.

With Davis out, Harrell will have ample opportunity to continue to boost his scoring average on the season. While he has been averaging 13.3 points per game this year, that number has risen to 15.8 in the six games Davis has missed on the year. That trend should continue against the Nets, with Harrell feasting against Jordan. 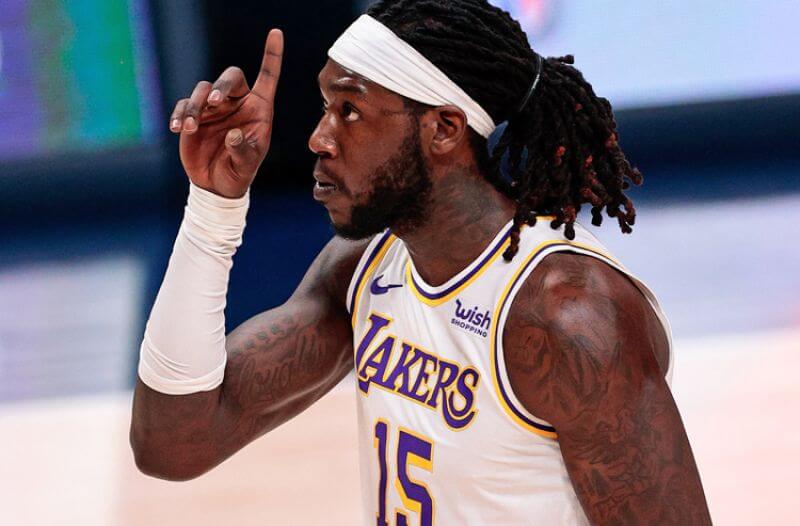