Nets vs Celtics Game 3 Picks and Predictions: BK Stand Up

The Nets thoroughly dominated the Celtics in Game 2, and face a slightly-deflated total for Game 3 with their defense actually showing up so far in the postseason.

Remember in the finale of classic Adam Sandler flick “Happy Gilmore” when the long-driving golf misfit learned how to putt with his modified “hockey” putter? Uh oh.

That’s the way the Boston Celtics – and the rest of the NBA – feel about the Brooklyn Nets after watching the offensive juggernaut “learn” how to play defense in its first two wins of this Eastern Conference quarterfinals. The NBA betting odds have the “lockdown” Nets installed as 7-point favorites with the series swinging to Boston for Game 3 Friday.

Here are our free NBA picks and predictions for Nets vs. Celtics on May 28.

Brooklyn opened as low as -6.5 on the road in Game 3 and quickly got bet up as high as -9 at some books. The total hit the board at as low as 226.5 and jumped to 228 with money coming in on the Over. According to DraftKings Sportsbook, 90 percent of bets are on the Nets with 93 percent of the money also riding on Brooklyn. About 79 percent of total wagers are on the Over for Game 3.

Brooklyn is 21-10 Over/Under in its last 31 games with a total of less than 230 points. Find more NBA betting trends for Nets vs. Celtics.

To modify a quote from Brooklyn’s finest, is this Nets defense all a dream? Brooklyn owns a defensive rating of 103.1 through two games versus Boston – second-best among postseason teams – which is a stark contrast to the team’s regular-season metric of 113.1 (22nd). The Nets are doing a lot of things right on both ends of the court, including creating offense from defense with 28 total points off 29 turnovers in the series – not like they need any help scoring.

After a rough first half in Game 1, Brooklyn started to find its way in the final 24 minutes of the opener. That translated into a masterpiece in Game 2, in which BK recorded 31 assists on 46 made field goals and flattened the Celtics defense with impeccable ball movement. On the season, the Nets ranked ninth in assists per FG (0.621) while also holding claim as the top isolation offense in the East, averaging 1.05 points per play when going one-on-one. So far in this series, Brooklyn is scoring an average of 29.5 points in isolation sets.

That makes the Nets nearly impossible to stop and has the Celtics’ defense visibly lost. The Nets can run Boston into the ground in transition and yank them around the court with slick ball movement, while relying on isolation takes when the shot clock ticks down.

Boston doesn’t have those variations on offense to counter punch the Nets’ bevy of looks, and appeared disjointed in the opening two games of this quarterfinal matchup, relying far too much on isolation plays. The Celtics, who rank 27th in assists per field goal, aren’t testing Brooklyn at all or making it work on defense with ball movement, which puffs up the sudden shutdown prowess of the Nets.

Perhaps the most damaging defense stat the Nets have posted versus the Celtics is limiting their foes to just 33.3 percent shooting from beyond the arc and just 23 total 3-pointers in the series. Boston wasn’t overly reliant on the triple this season, but against the firepower of the Nets, you need to be able to hit from outside just to keep pace.

I expect more fight from the C’s back in the Garden, but Brooklyn is crushing these big spreads with ease (covering -8.5 and -9 at home) and is now 14-3 ATS in its last 17 games as an NBA betting favorite.

Some of Brooklyn’s impressive defense numbers are due to the Nets’ extra efforts: creating turnovers, limiting easy looks, and contesting shooters. However, Boston’s efforts of 108 and 93 points through the first two games also put blame on the Celtics.

With the series headed to the TD Garden for Game 3, you can expect a better scoring performance from Boston, which averages 114.2 points on 47.2 percent shooting at home this season. The Celtics have capable scorers beyond Jayson Tatum, but they haven’t been able to get into a rhythm and that’s vital for guys like Kemba Walker and Marcus Smart, who tend to erupt for hot stretches.

As for the Nets offense, it’s as sure as death and taxes. We took the Over in Game 2 with the total at sub-230 and with Game 3’s Over/Under sitting at 228 and all the buzz about Brooklyn’s newfound defensive stature dragging that number down, we’re going back to the Over on Friday. The Nets are 21-10 Over/Under versus totals of less than 230 points this season.

After the 2020 playoff bubble in Disney neutralized home-court last summer, we return to the normal series format and welcome back one of my favorite all-time betting trends: the 0-2 trend.

Teams trailing 0-2 in an NBA Playoffs series and heading home for Game 3 are 72-40-8 versus the first-half spread (64%) since 2007 – excluding last year’s neutral-court playoff situation.

Most betting trends are fluff, but this one has a narrative that makes perfect sense, with the 0-2 team desperate to show some fight in front of the friendly crowd in Game 3 – at least for the opening 24 minutes.

Bookies have gotten wise to the 0-2 trend in recent postseasons and skew those 1H spreads on the home team to reflect it, which has sucked some of the value out this strategy and left it to go just 8-8-1 ATS 1H in 2018 and 2019.

That said, books are dealing the Celtics 1H spread between +3 and +4.5, so be sure to shop around for as many points as you can grab if you have the option. 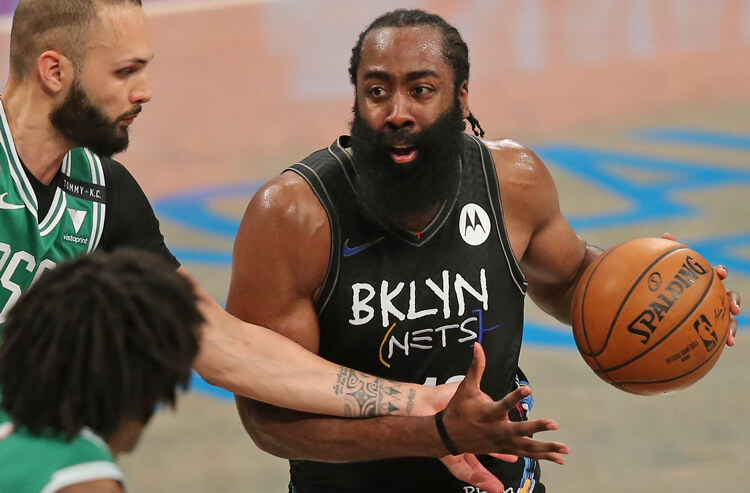 Nets vs Celtics Game 3 Picks and Predictions: BK Stand Up
Provided by