Mavericks vs Hornets Picks and Predictions: Luka, Mavs Grind Hornets to a Halt

Dallas took a tough loss last night, but gets a chance to re-assert itself in a potential bounce-back spot tonight. Find out why the road squad should be able to dictate tempo and pull off a win with our Mavericks vs. Hornets picks.

The Charlotte Hornets are in a battle for play-in seeding, currently knotted with Atlanta for the final spot in the end-of-season mini-tournament.

The Dallas Mavericks are no strangers to seeding duels, currently locked into a three-way tilt with Utah and Denver for the West's No. 4 seed.

Find out which side will pick up a precious win against a tiny spread with our Mavericks vs. Hornets NBA picks and predictions for Saturday, March 19.

Mavericks vs Hornets picks and predictions

Both squads should be feeling a sense of urgency tonight, as every game will count down the stretch with pivotal playoff races in the balance.

This Dallas-Charlotte matchup pits highly-contrasting styles against one another: the Mavs priding themselves on defense, while the Hornets are seemingly allergic to it at times.

The Hornets rank 23rd on the season in defensive rating, paired with an offense that has slowly trickled down to the league's No. 10 rating after ranking Top 4 over the first half of the season. While they're 5-2 both straight up and against the spread in their past seven games, most of those wins have come against teams that are objectively bad: the Hawks, Thunder, Pelicans, and Spurs, with one quality win over the Cavs. The two losses were double-digit downers to the Celtics and Nets.

Dallas profiles more in the latter group, at 8-2 SU in its last 10 games (7-3 ATS) and owning a Top-5 win percentage over the past six weeks. The Mavs suffocate opponents with a Top-6 defense while playing at the league's slowest pace, and wreaking havoc in the halfcourt with Jalen Brunson and Spencer Dinwiddie flanking Luka Doncic.

The Mavs frequently run pick-and-roll sets to get Doncic into the paint, and the Hornets' lack of lockdown defenders or solid rim protection could get them into trouble if Miles Bridges has to switch off Doncic.

Dallas might be a bit gassed after losing to the Sixers last night, but the semi-empty tank will only further incentivize them to grind this game to a halt, playing the Hornets out of their comfort zone. The Mavs have one of the lowest turnover rates in the NBA, and can limit the opportunities for Charlotte to run in transition while forcing it to expend more effort on defense in longer shot-clock drains.

The onus will also be on Doncic here to get a W, as he's been arguably the best player in the NBA over the past six weeks and knows whoever loses the 4-5-6 power struggle the Mavs are locked into will likely have to face Golden State in the first round.

The Hornets can only bring it on one end and seem like they're getting too much credit as the home team against a foe on zero rest. Look for Dallas to assert itself as the better side here.

As noted above, we expect the Mavs to control the tempo of this game, both as the better, more disciplined team on a back-to-back and based on recent track records.

While bettors will be understandably reluctant to grab the Under in a game featuring a fast-paced, one-way team like the Hornets, they tend to succumb to the will of opponents that profile like the Mavs (slow-paced, defense-first). The Hornets fell safely short of this total in recent matchups with the Celtics (216 points), Cavs (217), Raptors (218), and Heat (218), with the Mavs being the very slowest team in the entire NBA.

Meanwhile, Dallas has likewise recently fallen short of this number in matchups with Over-magnets like the new-look Sixers (212 points), Nets (214), Rockets (213), Jazz (214), and Lakers (213), suggesting it's consistent with owning the tempo.

Dallas knows it can flex an edge on defense and aggravate the speed-needy Hornets by keeping this game in check. This total's a bit too high for our liking.

We're backing the Mavs to win a pick 'em here, and think they'll likely have an edge in the first half, where the Hornets are just 32-35 ATS (-8.78% ROI per EV Analytics) despite their solid 38-30-2 ATS record overall.

Their recent outings don't suggest much of a fast start either:

The Hornets have shown a clear impetus to turn on the jets in the second half after poor showings in the first, while the Mavs are one of the few money-makers league-wide on first-half spreads.

Basic logic might lead us to believe a rested Hornets team that likes to push the pace will run the Mavs off the court, but most of the evidence points to the gameplay favoring Dallas, which makes the +175 price on a Mavs double result too tempting to pass up.

Did you know that if you parlayed today’s NBA Mavericks vs. Hornets predictions and picks in a single-game parlay, you could win $90.23 on a $10 bet? 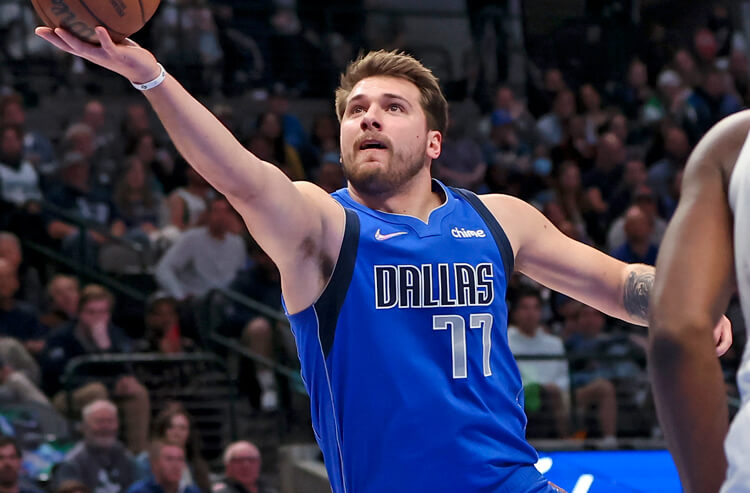 Mavericks vs Hornets Picks and Predictions: Luka, Mavs Grind Hornets to a Halt
Provided by