Lakers vs Suns Game 2 Picks and Predictions: Phoenix Hungry in the Desert

Devin Booker scored a game-high 34 points in Game 1, powering the Suns to a series-opening victory over the Lakers.

Bookies are bracing for a bounce back from the Los Angeles Lakers in Game 2 of their Western quarterfinal NBA Playoffs series with the Phoenix Suns on Tuesday.

The Lakers are slim NBA betting favorites for Game 2 after closing as 2.5-point road underdogs in Game 1, losing 99-90 to the Suns. Playing into these odds is a shoulder injury suffered by Phoenix veteran point guard Chris Paul, who battled through 36 minutes of play but was visibility limited Sunday.

Check out our free NBA picks and predictions for Lakers vs. Suns on May 24.

This spread opened with Los Angeles as a 1.5-point favorite on the road and moved to -2, where it sits at most operators. According to FanDuel sportsbooks, 71 percent of spread bets and 76 percent of the spread handle is on Los Angeles. The total hit the board at 208 points and has moved up to 210.5, with 87 percent of total tickets on the Over and 85 percent of the money wagered on the total sitting on the Over as well.

The Suns are 11-4 ATS in their last 15 games as underdogs. Find more NBA betting trends for Lakers vs. Suns.

You could kind of see the Lakers’ letdown coming in Game 1. Not only was L.A. fresh off an emotional comeback win over Golden State in the play-in tournament, setting up this series with the Suns, but LeBron James & Co. seem to lack a sense of urgency in series openers, going back to Game 1 losses versus Portland and Houston in last year’s NBA Playoff bubble.

Can a bit of playoff pressure force the Lakers to snap out of it on offense? Los Angeles has looked wretched the past two games, shooting 43 percent from the floor versus the Suns and 41 percent against the Warriors while combining to go 17 for 57 from beyond the arc — just under 30 percent which is bad, even for an L.A. squad that finished 21st in 3-point shooting on the year (35.3%).

Slow starts have plagued Los Angeles in both of those games, falling behind 13 and eight points at the halftime break while trailing by as many as 16 points at Phoenix in Game 1. This Lakers squad is not built to play from behind — at least not when the offense is struggling like it is — and that’s cost Lakers bettors to the tune of a 1-5 ATS skid over the last six games overall.

Paul’s injury is concerning, but the Suns may have been better without the one-armed point guard on the floor in Game 1. Paul was routinely sloppy with the basketball and was lucky to record only one turnover, while shooting just 3 for 8 from the floor with eight assists. Phoenix has solid help behind him in the backcourt and with the way the Lakers guards are coming up short, they don’t have much to worry about on the perimeter.

The wear and tear of the tight turnaround between last year’s bubble run and the constricted 2020-21 NBA schedule is beginning to show on the Lakers, if all those late-season injuries weren’t enough evidence. The lack of giddy-up is compounded versus a hungry Phoenix franchise that outworked L.A. on both ends of the floor Sunday.

The Fountain of Youth won’t be discovered by the Lakers between Games 1 and 2 and it sure isn’t hiding in the Arizona desert. We like Phoenix as a home pup on Tuesday, a role the Suns have played only four times this season (2-2 ATS).

Books aren’t playing around with the Game 2 total, opening the number at 208 points for Tuesday’s tilt after the teams combined for only 189 points in the opener versus a Over/Under of 214. There have been only 21 games this season with an Over/Under of 208 points or lower and the Lakers have been involved in seven of those contests, going 4-3 O/U.

Shooting comes and goes — something L.A. knows all too well — but defense travels. If Los Angeles is going to avoid taking a 0-2 deficit back to La-La Land it will be on the shoulders of its elite defense.

The Lakers did a good job avoiding the knockout punch from the Suns, limiting them to 9-of-28 shooting from beyond the arc, which is something that kept them alive in the play-in game versus the Warriors. Los Angeles ranks fourth in defending triples and allows an average of only 11.4 3-pointers per game.

Both Phoenix and Los Angeles play controlled halfcourt sets and Game 1 boasted a snail-like pace rating of 92.5. The Suns don’t want to run with L.A. in transition nor do they want the Lakers to get any momentum on offense, so expect clock-eating calculated sets from the home side. Phoenix has been able to beat L.A. down the floor on defense and is happy turning LeBron and Anthony Davis into jump shooters, giving up only 19 makes from inside of eight feet in Game 1.

LeBron scored just two buckets in the paint in Game 1 and attempted only four field goals inside the key, instead settling for seven attempts from beyond the arc and a couple sideline jumpers from 17 feet out. James finished with 18 points on 6 of 13 shooting and was a dismal 3 for 6 from the charity stripe.

The Suns did a great job slowing down the James train in transition by simply beating L.A. back on defense and clogging up the key with fantastic help and communication. Not only does this leave a less-than-healthy LeBron to settle for long jumpers but it brings the Lakers offense to a screeching halt, as James catches and holds the ball for way too long.

Phoenix has some workable matchups on James, most notably the lanky Mikal Bridges, and when LeBron bullies his way into the paint, the Suns’ help defense is great at beating opponents to the spot and forcing them to kick out.

James dropped 38 points on Phoenix at home back in March but that was ages ago in NBA time. He’s 13 for 30 from the field in postseason action so far and we’re calling for another quiet night in the points column for the King. 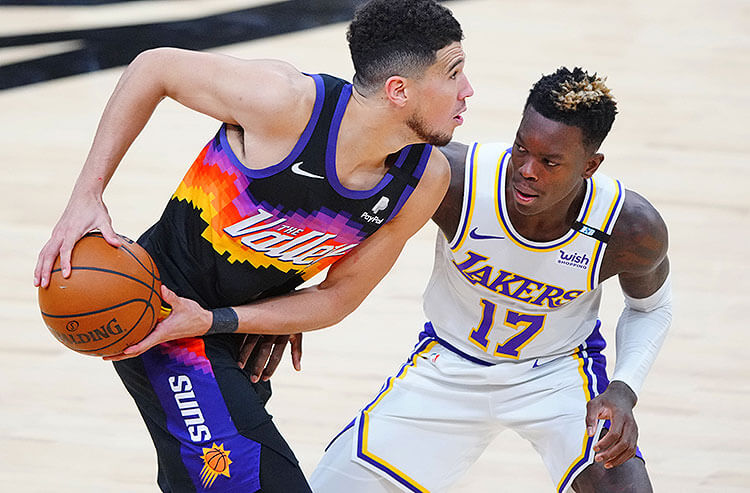 Lakers vs Suns Game 2 Picks and Predictions: Phoenix Hungry in the Desert
Provided by