Lakers vs Suns Game 5 Picks and Predictions: Series Has Shifted Back in Suns Favor

Phoenix big man Deandre Ayton has had his way with the Los Angeles Lakers interior defense, averaging close to 20 points and 13.5 rebounds through four games of their first-round series.

What a difference 24 minutes of basketball can make. The Los Angeles Lakers went from series favorites versus the Phoenix Suns and holding a 4-point halftime lead at home Sunday, to underdogs in this Western Conference quarterfinal and likely playing without their top interior talent for Game 5.

Lakers forward Anthony Davis is doubtful for Tuesday’s tilt in Phoenix after suffering a groin injury just before the half in Game 4. That sudden swing in fortunes has L.A. getting five points from the NBA betting spread for Game 5.

Here are our free NBA picks and predictions for Lakers vs. Suns on June 1.

The Lakers are 2-14 ATS in their last 16 playoff games as underdogs. Find more NBA betting trends for Lakers vs. Suns.

This tightly contested first-round set took a major swing toward Phoenix in the second half of Game 4. Not only did Davis stay in the locker room for the final 24 minutes but Suns veteran point guard Chris Paul appears to be over his ailing shoulder after suffering the injury in the series opener.

Paul, who was visibly laboring through the first three contests of the series, played his best game of the playoffs Sunday, scoring 18 points and dishing out nine assists in almost 32 minutes of work. Not only was Paul a calming influence when the Lakers made a run toward the end of the fourth, but he shot 7 for 15 from the field, knocking down his routine mid-range jumpers — something Los Angeles didn’t have to worry about when his shoulder was slowing him down.

On top of a rejuvenated Paul, the absence, or even the limiting, of Davis on the defensive end opens up space for Phoenix’s big man Deandre Ayton, who has torn through the L.A. interior like a kid opening a PS5 on Christmas Morning, averaging close to 20 points and 13.5 rebounds in the NBA Playoffs.

Ayton scored just 14 points on 6-of-8 shooting in Game 4 but 10 of those came in the second half, as Los Angeles struggled to contain the 6-foot-11 center with lead-footed defensive options in Marc Gasol and Andre Drummond. Even the mighty LeBron James was outmatched under the basket.

Speaking of LeBron, he is the one domineering factor that can keep the Lakers from falling behind in the series. That said, he’s not been playing at his usual level since returning from an ankle injury at the end of the season and the tax of last year’s championship run — and abrupt turnaround into the 2020-21 condensed campaign — are starting to show cracks in his Hall-of-Fame game.

James has been much more aggressive inside the past two games after settling for low-efficiency jumpers in the opening outings of the postseason, yet his 3-point shooting is spotty (2 for 12 the last two games) and his turnover troubles are becoming an issue, coughing the ball up an average of five times in this series after posting less than four per game in the regular season.

An official announcement on Davis may not come until closer to tipoff on Tuesday, so if you like the Suns in Game 5 bet them now and get ahead of the line adjustment and public reaction if AD is ruled out. Groin injuries — even mild ones — are nearly impossible to play through, without having some aspect of your game compromised.

The frontcourt rotation for Lakers coach Frank Vogel has come under fire, with him choosing to roll out bigger stronger bodies rather than counter the Suns’ mobility and energy with more athletic forwards.

Los Angeles started Kyle Kuzma along with LeBron and Andre Drummond up front in the second half of Game 4, but Kuzma has some head-shaking series on both ends and his inconsistent play is not going to fill the gap left by AD. With Drummond and Gasol likely lugging more minutes, expect this L.A. attack to run in sand in terms of tempo.

And while Davis is a huge influence around the basket on defense, the Lakers have played without him this season and didn’t suffer much of a downtick in terms of defensive output. Los Angeles is especially good at guarding against the 3-pointer, which has pretty much been ripped from the Phoenix playbook in this series.

The Suns are shooting a dismal 32.2 percent from distance in the postseason, getting limited to only 9.5 triples per game. Phoenix was 10 for 35 from beyond the arc in Game 4, which is a significant dip considering this offense ranked seventh in 3-point shooting percentage in the regular season (37.8%) and drained more than 13 threes per contest.

With Davis’ status up in the air and these foes going 0-3-1 O/U in the first four encounters of the series, the Game 5 total has dipped under 210 and sits at 208.5 points. The overall tempo of the series (95.25 pace rating) and lack of 3-point threats backs up this diminutive number.

On top of bullying the Lakers inside the paint with the basketball, Ayton has done a fine job defending it on the other end of the floor.

The second-year center was assigned to Davis for more than 22 minutes in this series, limiting the All-Star to under 38 percent shooting when matched up. The outside shooting touch of AD stretched Ayton away from the key but if the Lakers are without their uni-browed enforcer, that means the Suns big can cheat off some of the plodding L.A. forwards and play the role of rim protector.

Ayton has just four blocks in the first four games of the playoffs and averaged 1.2 shots swatted in the regular season. The Lakers aren’t a great outside shooting team and are dependent on getting to the paint — and that’s where they’ll meet the 7-foot-5 wingspan of Ayton. 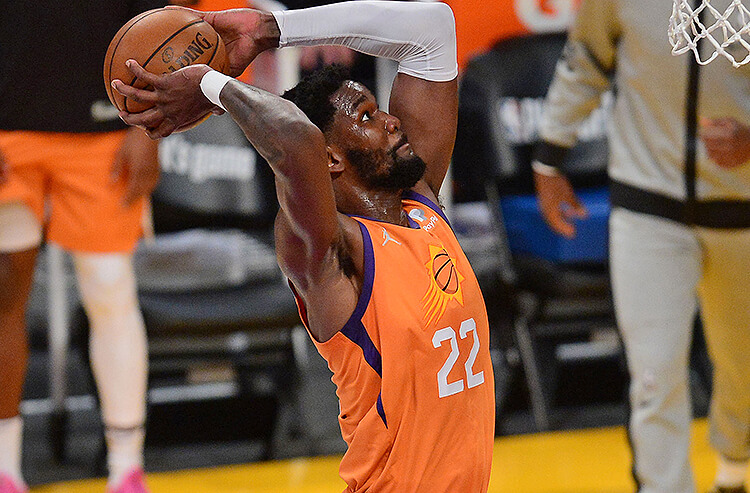 Lakers vs Suns Game 5 Picks and Predictions: Series Has Shifted Back in Suns Favor
Provided by