Trae Young has been sensational through two games against the Knicks, averaging 31 points and 8.5 assists, as the Hawks are tied 1-1 with New York heading into Friday's Game 1 in Atlanta.

The highly entertaining Atlanta Hawks-New York Knicks first-round playoff series heads down South with both teams knotted up at one win apiece.

The Knicks mounted a big second-half comeback in Game 2 to win — and cover — as short home chalk, but it's the Hawks who are NBA betting favorites on their home court.

Who will grab control of this series with a Game 3 win? Find out our thoughts in our Knicks vs. Hawks picks and predictions for Friday, May 28 with tip-off set for 7:00 p.m. ET.

The line opened at Atlanta -4.5, with early action on the Knicks shifting the spread to -4. The total currently sits at 211, up a half-point from the opening number of 210.5. According to DraftKings Sportsbook, 61 percent of bets are on the Knicks with 64 percent of the money also riding on New York. About 72 percent of total wagers are on the Over for Game 3.

The Knicks are 9-2 ATS in their last 11 games as a road underdog. Find more NBA betting trends for Knicks vs. Hawks.

Through the first two games of this Eastern Conference quarterfinal, the most impactful player has been, by far, Atlanta star PG Trae Young. He's torched the Knicks for 62 points on 51.2 percent shooting (50 percent from distance) but has also blown by defenders and gotten into the paint at will, dishing out 17 assists in the first two games, mainly resulting in wide-open 3-point looks for teammates.

He tortured the Knicks in the opening half of Game 2 as well, powering the Hawks to a 13-point lead and making New York look dead in the water.

But things flipped in the final 24 minutes, where New York picked up its shooting and Atlanta's lack of depth reared its ugly head.

New York stormed back to tie the game with just under three minutes left in the third. Then Young and the starters went to the bench for rest 20 seconds later and Atlanta's offense, without anyone capable of creating offense, went bone dry over the next six minutes, getting outscored 16-6 until they returned.

While the Hawks made a push, New York gave Atlanta a new defensive look by having lanky guard Reggie Bullock cover Young. Atlanta's star did not make a basket in the final seven minutes (and just attempted two shots over that stretch) and cold shooting from everyone else was too much to overcome.

The series now shifts to the ATL, but being on the road hasn't bothered the Knicks, who are 23-13 ATS in away games this year and have covered in nine of their last 11 road games against teams with winning records.

Atlanta's starting five is more talented than New York's, but the Knicks have seemingly found a matchup to limit Young's dominance down the stretch and have a clear advantage when it comes to the bench. Spotting the Knicks, or either team really, four points in this series seems like way too much considering how evenly matched these clubs are, so we're taking the 'Bockers on the road in what should be another down-to-the-wire affair.

For as dominant as Young has been, New York's shining star, Julius Randle, has had major struggles. Randle scored just 15 points in each of the first two games (after averaging 24.1 for the season) on just 11-for-39 shooting.

Even with Derrick Rose playing his best basketball in years, poor performances from Randle (who had two points at halftime in Game 2 off of free throws) severely limits New York's offensive ceiling, with the result being point totals of 105 and 101.

The Knicks' defense, however, is among the stingiest in the league, giving up 107 points in Game 1 and just 92 points Wednesday. Atlanta's offense is a touch better at home, averaging three extra ppg at State Farm Arena, but New York also gave up the fewest ppg on the road this season.

New York was one of the NBA's premier Under teams all season and has finished below the total in six of its last seven games, while Atlanta has cashed the Under in five straight contests.

The first two games of the series averaged 202.5 points per game — well Under the totals of 213.5 and 214. Despite Game 3 having a total of just 211, with how physical this game will be and the bad blood that's already brewing, we're expecting this to be another brawl that finishes Under yet again.

One of the most entertaining storylines developing early in this series is the ascension of Young's villainy in the eyes of New York fans.

After hitting the game-winning shot in Game 1 (with a very villainous "shhhhh" after) and Knicks fans responding with a number of, umm, colorful chants in Game 2, Young has embraced his public enemy No. 1 status — and has lived up to the billing.

Young has dropped 32 and 30 points in each of the first two contests, which makes it five games of 30+ points in his last seven overall. Defended mostly by the likes of Elfrid Payton Jr., Alec Burks, and Rose, Young has routinely blown by all opponents for floaters in the paint, or found nothing but the sweet sound of net from beyond the arc (including a couple of effortless 30-footers).

While he was quiet at the end of Game 2 (with Bullock guarding him), he won't be facing that matchup all game and you can almost guarantee he's going to make a point of asserting himself again early and often on Friday.

Young's point total for Game 3 is 25.5 points, which is basically his season average. Betting him to go Over that at home, when he's on fire, playing on the biggest state and facing a team that might have one guy capable of somewhat containing him (while the rest have been as effective as a traffic cone)? 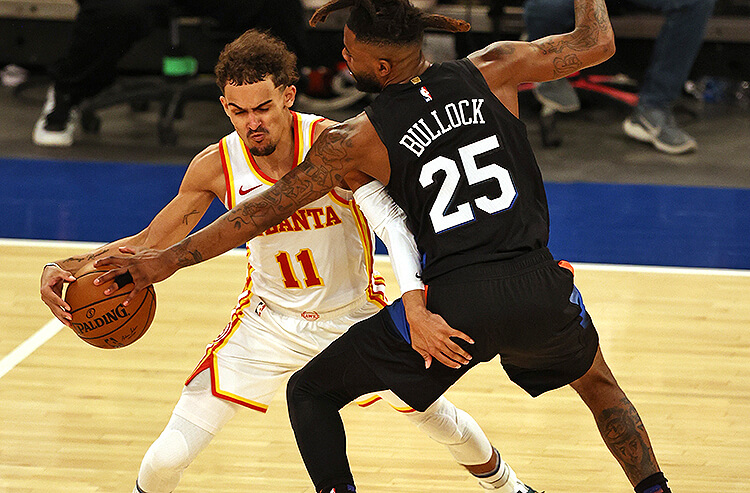 Knicks vs Hawks Game 3 Picks and Predictions: Expect Another Hard-Nosed Contest
Provided by