Jazz vs Suns Picks: Bet on Booker and the Suns at Home

Phoenix All-Star Devin Booker is averaging 37.7 points per game over his last three contests and has a good matchup tonight against Donovan Mitchell, who's not exactly known as a defensive stopper.

The Phoenix Suns host the Utah Jazz Wednesday night in a meeting between two of the best teams in the NBA. The Jazz are 2.5 games ahead of the Suns, but can Phoenix find a way to gain ground on Utah for the top seed in the West?

Find out in our free NBA betting picks and predictions for Jazz vs. Suns, scheduled to tip-off at 10:00 p.m. ET at Phoenix Suns Arena.

Utah opened -2 Tuesday night at DraftKings, dipped to -1.5 over morning coffee, stepped up to -2.5 midafternoon and is back at the opener at 8 p.m. ET. The Jazz are attracting 57 percent of spread tickets and 58 percent of spread cash. The total initially dipped from 225.5 to 224.5, but by lunch hour rebounded to 227, where it remains tonight, with 77 percent of bets/63 percent of money on the Over.

The Suns are 12-1 ATS in their last 13 games against teams with winning records. Find more NBA betting trends for Jazz vs. Suns.

The Suns have won nine of their last 10 games, but their opponent tonight has the best record in basketball. While Phoenix is fifth in the league in defensive rating and seventh in offensive rating, the Jazz are third in the league in defensive rating and second offensively. Both of these teams just execute at a very high level on both ends of the floor, and that’s what should make this one extremely exciting. People might not realize it, but there’s a *chance* this is a preview of the Western Conference Finals.

While it’s the Jazz that have the better analytical profile in this game, the Suns should feel confident in their ability to pick up a win here. Phoenix has the type of defense that should make it hard on Utah to get open looks, which will make things tough on guys like Bojan Bogdanovic and Joe Ingles. Both of them generally do their damage in catch-and-shoot situations, but Mikal Bridges and Jae Crowder will be all over them here.

On the other side, Devin Booker has a chance at having another special performance tonight. Over the last three games, the All-Star is averaging 37.7 points per game and Donovan Mitchell isn’t really capable of defending him. Booker normally has the jumper going, but he should be able to apply some pressure on Rudy Gobert at the rim too—Booker’s first step is incredibly underrated, and he’s going to be able to get in the paint in this game.

The Suns really should win this game outright, so getting points makes this a really enticing play.

Both of these teams are excellent defensively, so it wouldn’t be too surprising if this game is relatively low scoring.

Four of the last five games the Jazz have played have gone Under the total, and it’s hard to imagine these teams running and gunning in this one. Both teams are good at getting it going in half-court situations, so it’s likely they’ll slow things down and let the final couple of minutes decide who comes away with the win.

Gobert is quietly having one of the most absurd stretches of his career, as he has had two or more blocks in 14 straight games.

Since the All-Star break, he has just gotten his hands on everything, and he now has a matchup with Deandre Ayton, who occasionally goes up soft when he has the ball in the paint. Look for Gobert to continue his elite rim protection here, and don’t be shocked if he has another three or four blocks. 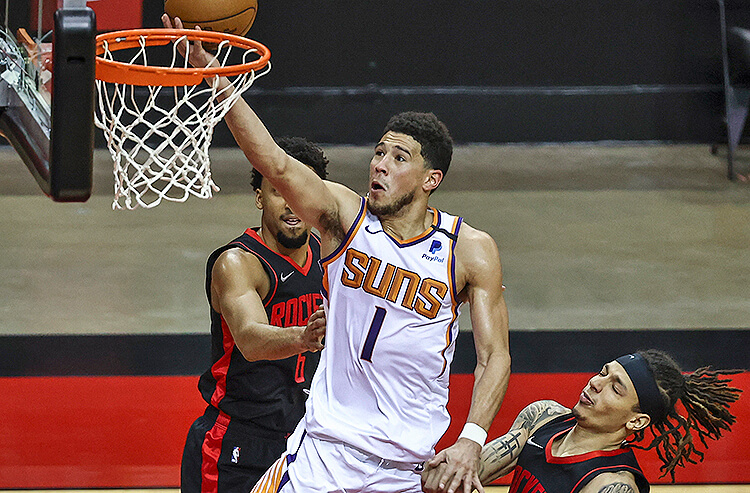 Jazz vs Suns Picks: Bet on Booker and the Suns at Home
Provided by