The Nuggets have been on the road for 13 of their last 16 games but they'll get to cook at home Wednesday against a mighty Jazz team. Denver's supporting cast and home crowd could make the difference, as our NBA betting picks highlight.

The Utah Jazz have won seven of their last eight games and will now look to stay hot with a road victory over the Denver Nuggets on Wednesday. The Nuggets lost by 14 against the Dallas Mavericks on Monday, but they should be energized by returning home after a four-game road trip.

Will Denver find a way to beat Utah at Ball Arena tonight? You’ll want to keep reading our Jazz vs. Nuggets NBA picks and predictions for the answer to that.

The Jazz opened as 3.5-point favorites against the Nuggets and that line is now moving between 3 and 3.5, with a large number of tickets being on Utah. Meanwhile, the total opened at 223 and can be found anywhere between 222.5 and 223.5.

USA: Game of the Week: Users who wager $50 or more on the Jazz vs. Nuggets game tonight will receive $1 towards a free bet equal to the leading scorer in the game's point total. (Minimum odds -250). Only at DraftKings. Claim Now

The Over is 9-3 in the Nuggets’ last 12 games as underdogs. Find more NBA betting trends for Jazz vs. Nuggets.

Jazz vs Nuggets picks and predictions

The Nuggets are going to need to play extremely well in order to trade punches with the Jazz, but they are fully capable of doing so. They might be coming off of a loss to the Mavericks, but they’re also just a week removed from a road win over the Golden State Warriors. Denver is also coming off of a stretch that included the team playing on the road in 13 of its last 16 games. Now, the Nuggets should be excited to get out there and play in front of their own fans.

The reality of this game is that Nikola Jokic is going to need to really play well for the Nuggets to win, but we know he is capable of going out there and playing at an elite level against Rudy Gobert. He is one of the few big men that has been unbothered by Gobert’s otherworldly rim protection, and he should flirt with a triple-double tonight. With that, the Nuggets would just need a few role players to step up in this one, and they have some that are capable of doing so.

Will Barton is one player to keep an eye on in this game. The wing is averaging 15.1 points, 5.1 rebounds and 4.2 assists per game this year and he’s plenty capable of providing Jokic with the perimeter support he needs in this one. Utah is down one good wing defender with Ingles out in this one, so that’s going to make life easier on some of these Denver guards and forwards.

Utah has scored at least 115 points in six of its last seven games, which is just part of being the best offensive team in basketball. With the Jazz turning in that type of offensive production on a nightly basis, it’s almost difficult for close games to not go Over the total. And considering Ingles, a good perimeter defender, is out for Utah in this game, the team is going to be giving up even more on the defensive end than usual. All of that is good for those that want to back the Over in this one.

The Over is also 19-8 when the Nuggets are coming off a loss by 10 or more points over the last two seasons. This team generally knows how to self-correct its offense, and the team should be able to do so here.

Not only is the Over 9-3 in Denver’s last 12 games as an underdog, but it’s also 42-14-2 in the last 58 games in which Denver has been getting points at home. On top of that, the Over is 12-4 when Utah has played against teams that allow 108.0 or fewer points per game this season. Those games have had an average total points scored of 225.2 points per game, which falls above the mark on tonight’s contest.

Overall, it isn’t hard to see why this total might be a bit too low for a game involving a Utah team that is first in the league in offensive rating and 12th in the NBA in pace. This Jazz team is just good at getting into its offense and the Nuggets will need to dig down for some offense of their own in order to pull this out.

Did you know that if you parlayed today’s NBA Jazz vs. Nuggets predictions and picks in a single-game parlay, you could win $27.63 on a $10 bet? 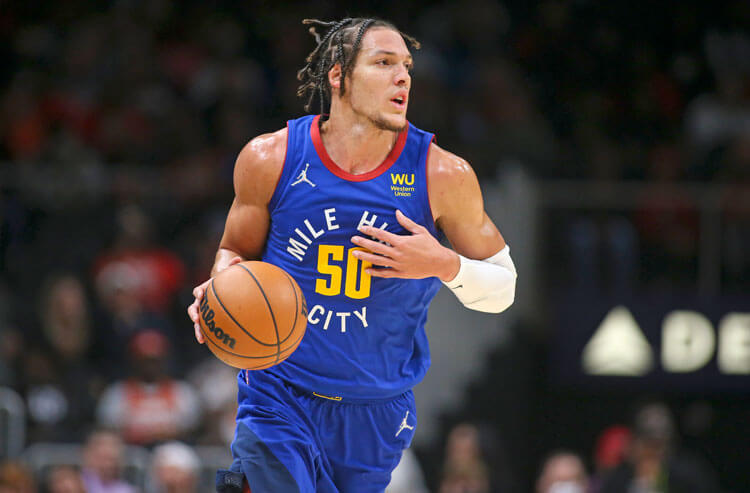