Warriors vs Mavericks Picks and Predictions: Defense Rules in Dallas

The Mavericks are rolling on a three-game win streak, boosted by Luka's return, but will be in tough to extend it tonight against Steph and the Warriors. It's a matchup with two scoring phenoms but defense will be the difference, as our picks break down.

Luka Doncic has returned for the Dallas Mavericks and he has quickly looked like his old self, just missing a triple-double in each of his first two games back.

Now, Doncic will try to lead the Mavs to a fourth straight win but they’ll have to do it as moderate underdogs as they welcome Steph Curry and the Golden State Warriors to town. The Dubs have been one of the NBA's best teams all season and are now eagerly awaiting the return of Klay Thompson.

Here is our free NBA betting picks and predictions for Warriors vs. Mavericks on January 5.

The Mavericks opened this Western Conference matchup as 6-point home dogs but have seen the early money, moving the line to 5.5. The total hit the board at 213 and has been bet up to 214.5.

The Mavericks are 0-5 ATS in their last five home games against a team with a winning road record. Find more NBA betting trends for Warriors vs. Mavericks.

Warriors vs Mavericks picks and predictions

Getting Luke Doncic back is big for the Dallas Mavericks. The Mavs point guard is averaging 17.5 points, 12.5 assists, and 8.5 rebounds in his first two games. That is huge for a team that just hasn’t looked right offensively this season.

The Mavericks have been a Top 10 offense in terms of offensive rating in each of the last two seasons, but this season they rank 17th. Doncic’s scoring and effective field goal percentage are also the lowest it has been since his rookie season.

Now, they have to deal with a Warriors team that is deep and goes after it on the defensive end of the floor, leading the NBA in defensive rating, scoring defense, and opponent field goal percentage. It won’t help the Mavs that Kristaps Porzingis has entered the league’s health and safety protocols.

Oh, the Dubs also have this guy Steph Curry. You know. Betting favorite to win his third NBA MVP award and greatest 3-point shooter of all time? That guy.

Curry leads a Dubs team that has won seven of its last eight games and ranks fourth in offensive rating and second in effective field goal percentage. While the Mavericks can get after it on defense, they rank a sub-par 17th when it comes to opponent shooting percentage.

The Mavericks' offensive struggles won’t be helped with Porzingis on the sidelines, and they won’t be able to keep up with the Warriors' elite offense. Bet on the favorite here.

When it comes to the total, the early money has come in on the Over, but the number might be high enough to look at the other side.

Even with Doncic back in the lineup, the Mavericks put up just 103 and 95 points in each of their past two games. The Mavs rank 26th in scoring this season and frankly, just aren't a good shooting team, ranking 21st in effective field goal percentage. Now, they’ll face the Association's top-rated defense without their second-leading scorer.

Dallas will obviously have its hands full with Curry and the Dubs’ offense, but the Mavericks are solid at that end of the floor ranking 10th in defensive rating and allows the third-fewest points per game in the league.

Bet on this one being a bit of a defensive battle.

Curry is coming off one of his worst shooting performances of the season, going 1-10 from 3-point range in the Warriors' win over the Miami Heat. But all that did was give us a good number on his made threes prop for this matchup.

You know a bad shooting performance isn’t going to keep Curry down for long. There have been seven games this season when Curry has hit three or fewer threes in a game. In the following game, he has hit at least five.

Curry is also still shooting 39.3 percent from beyond the arc and faces a Mavericks team that ranks 18th in opponent 3-point percentage.

Did you know that if you parlayed today’s NBA Warriors vs. Mavericks predictions and picks in a single-game parlay, you could win $50.74 on a $10 bet? 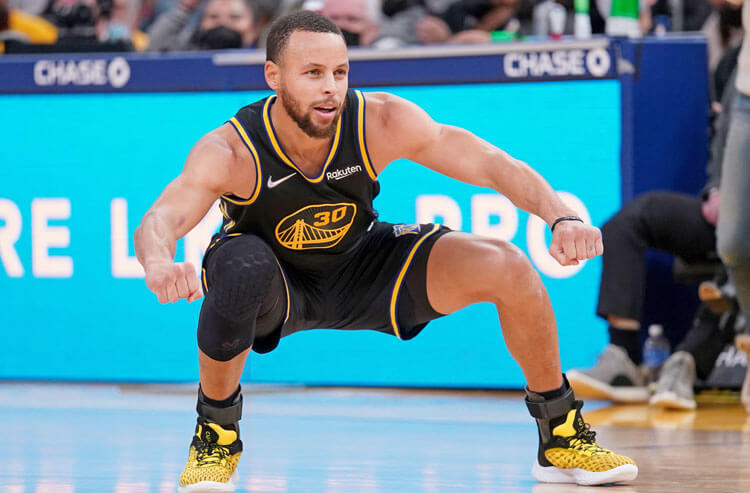 Warriors vs Mavericks Picks and Predictions: Defense Rules in Dallas
Provided by