Toronto and Milwaukee are both healthy and rolling, so which of them has the edge against tonight's spread? Find out with our preview of tonight's showdown — our Raptors vs Bucks picks say to expect scoring.

Fred VanVleet and the Toronto Raptors are heating up. VanVleet has poured in 30 or more points in three straight games with the Raptors winning all three.

The challenge gets a little tougher if the Raps want to make it four in a row, as they visit the defending champion Milwaukee Bucks in what will be their second game in as many nights.

Is Toronto a live underdog, or will Milwaukee prove too much? Find out in our free NBA betting picks and predictions for Bucks vs. Raptors on January 5.

The Raptors opened this Eastern Conference matchup as 7.5-point underdogs and the line has yet to see much movement as of Wednesday morning. The total hit the board at 225.5. Once Giannis Antetokounmpo was announced out with a non-COVID illness the Bucks dropped to 3.5-point chalk while the total dipped to 221.5.

The Over is 8-0 in the Raptors' last eight games overall and 6-1 in the Bucks' last seven as a home favorite. Find more NBA betting trends for Raptors vs. Bucks.

Raptors vs Bucks picks and predictions

After spending the majority of the season with one key player or another injured or in health and safety protocols, the Raptors are finally whole and it’s quickly paying dividends.

Toronto has won three games in a row, covering the spread in each, thanks in large part to the play of point guard Fred VanVleet. The Raptors point guard has filled the bucket, putting up 30 or more points in each of the three wins while going 18 for 40 from 3-point range (45.8 percent).

Now, scoring won’t come as easy against a Bucks team that has climbed to ninth in defensive rating and sixth in opponent field goal percentage, particularly with Toronto playing the second half of a back-to-back.

Milwaukee enters this game having seen its six-game winning streak snapped at the hands of the Detroit Pistons, of all teams, and now it'll be without one of the best players in the NBA.

The Bucks will also be down several swingmen for this matchup, as Grayson Allen and Pat Connaughton have entered the health and safety protocols.

With Giannis Antetokounmpo out, the Raptors' versatile and long defenders like Pascal Siakam, OG Anunoby, and Scottie Barnes can focus on stopping Bucks sharpshooter Khris Middleton and force the remaining Milwaukee players to try and beat them.

While the Raptors are playing the second half of a back-to-back they are getting too many points for a team playing this well, facing a Bucks team missing three of its Top 6 scorers. Not to mention, they have covered the spread eight times in their last nine games.

The Bucks have had the NBA’s best offense since Dec. 22. They lead the NBA in both offensive rating and scoring over that span, putting up 121.4 points per game. Unfortunately, Antetokounmpo was leading the way, of course, averaging 32.6 points, 11.2 points, and 6.6 assists in his five games since returning from health and safety protocols.

That said, Giannis has missed eight games this season and the Bucks have still averaged 107.5 points in regulation in those contests.

They'll face a Raptors defense that is known for getting steals and deflections but still rank 20th in defensive rating.

On the other side, the Raptors are healthy and the offense has benefited. Toronto has put up 121.7 over the last three games while shooting 45.5% from the floor. That was all against teams who were all somewhat shorthanded.

And while the Bucks have picked up their play on the offensive end, the defense has slipped a bit as they have allowed 113.8 points per game over the last five games.

VanVleet has been on fire lately, but he also got support from Pascal Siakam, who looks like he’s playing his best basketball since 2019. Over his last five games, he is averaging 23.2 points on 52.2 percent shooting while adding another 11.4 boards and 5.8 assists.

Without Giannis playing, Siakam should have more room to work in this game and avoid the Bucks' best defenders like Jrue Holiday. With the way Pascal and Fred have been running the two-man game recently, he looks like a good bet to eclipse his point total in this one.

Did you know that if you parlayed today’s NBA Raptors vs. Bucks predictions and picks in a single-game parlay, you could win $26.45 on a $10 bet? 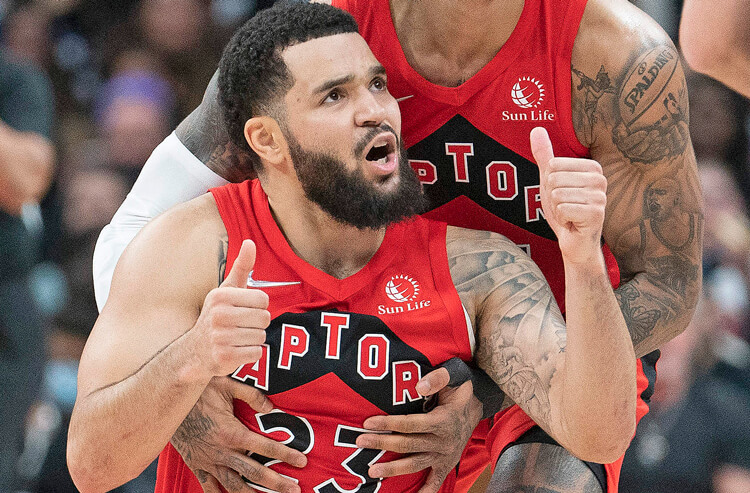 Raptors vs Bucks Picks and Predictions: VanVleet and Raps Cover Again
Provided by