With both Miami and Portland missing their top stars, it's easy to see this game going either way, but a slight edge in a couple of areas has us leaning on the Heat. Read more in our NBA betting picks for Heat vs. Trail Blazers.

The Miami Heat continue their six-game road trip when they head to Portland to face the Trail Blazers Wednesday night. After starting the road trip with a win in Houston, they fell to Sacramento and Golden State, losing Jimmy Butler to an ankle injury in the process.

Meanwhile, Portland has struggled all year long and has yet to find a groove. It's 14-22 on the season, 3-7 in its last 10, and will be without the services of Damian Lillard and C.J. McCollum again tonight. However, it managed to take down Atlanta at home two nights ago on the backs of an Anfernee Simons 43-point performance.

The Heat will be without Jimmy Butler and Bam Adebayo as well, meaning both squads will have to lean on their non-stars for major contributions.

Can Miami get its road trip back on track or will Portland make it back-to-back wins at home without Dame and C.J.? Find out in our free NBA betting picks and predictions for Heat vs. Trail Blazers.

This line opened with the Miami Heat as 1.5-point favorites, but has trended slightly up, with the Heat at -2 at most shops and laying 2.5 at a few others. The total opened at 216, was bet down to 215, but has settled back at 216 at the time of writing.

With Damian Lillard, C.J. McCollum, Jimmy Butler, and Bam Adebayo all ruled out for tonight's game, this matchup quickly becomes one where any non-star can get hot and make the difference, as seen two nights ago when Anfernee Simons went off for 43 points, helping the Blazers take down the Hawks 136-131.

Of those 136 points, Jusuf Nurkic, Norman Powell, Nassir Little, and Simons combined for 112 (!) of them. As a team, they shot 53% from the field and 44% from beyond the arc, albeit against a Hawks team that ranks 26th in defensive rating.

Even without their two best defenders in Butler and Bam, I expect the Heat — who ranks eighth in defensive rating — to do a much better job limiting those players tonight. Expect Kyle Lowry to be tied at the hip with Simons and Powell when he's on the floor.

Offensively, the Heat will lean on Tyler Herro, Kyle Lowry, and Caleb Martin to carry the load. While Herro and Lowry are known commodities, Martin has shown that he can help contribute in a meaningful way, averaging 16.3 points on 57/45/82 shooting splits over his last six games.

He's played his best games when Miami's stars have been out — including a 28-point performance against Milwaukee — and could be in line for another big night tonight against the Blazers' dead-last defense.

Portland is giving up nearly 120 points per game over its last 10 and is 3-7 ATS in that stretch. When you take away each team's two best players, Miami should have the better team, is better-coached, and should be much better defensively.

These types of games are hard to predict, but I'm trusting Miami to get it done in Portland.

The total in this game is set at 216 and all signs are pointing to the Over.

During Miami's first three games of this road trip, it's 3-0 to the Over, going Over the closing totals by an average of 6.5 points. If you go back a little further, the Over is 6-1 in the Heat's last seven and 23-15 on the season, second-best in the NBA.

Though the Heat's defense should be better than Portland's in this game, it has struggled of late, giving up 113 points per game over its last four.

On the other hand, the Blazers are atrocious on this end of the floor. They rank dead-last in defensive rating and have gone Over in three of their last four, playing in games of 267, 249, 245, and 225 points over that stretch.

They're truly a threat to give up 125+ on any given night, and Miami's defense just hasn't been good enough recently for us to lean the other way. Back the Over.

As mentioned above, Caleb Martin has been a highlight of this Miami Heat team that has been dealing with COVID issues and injuries seemingly all season long.

His points total is set at 13.5 for tonight's game, a number he's surpassed in four of his last six games, averaging 16.3 points in that span. It's important to note that Jimmy Butler played in five of those six games. In the game Butler missed, Martin poured in 28 points against Bucks, mentioned earlier.

With Butler out again tonight, he'll have a plethora of opportunities to score against the Blazers' NBA-worst defense, and should have no issues surpassing this number tonight.

Did you know that if you parlayed today’s NBA Heat vs. Trail Blazers predictions and picks in a single-game parlay, you could win $61.16 on a $10 bet? 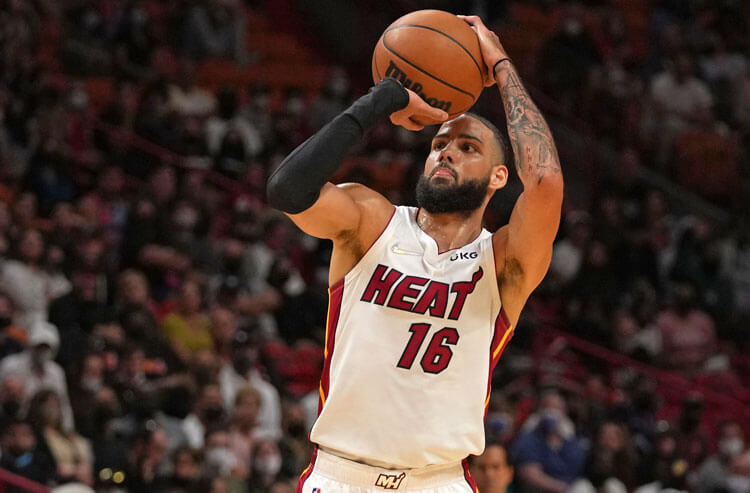