Nets vs Pacers Picks and Predictions: Kyrie's Return Gives Brooklyn a Shot in the Arm

The Nets have dropped three straight but are trying to immunize themselves against further struggles with some added depth, as Kyrie Irving gets set to make his season debut in Indiana. Find out if the Pacers can play spoiler with our NBA betting picks.

Kyrie Irving’s unwillingness to get vaccinated means his first action of the season could never occur in front of a home crowd, so he is unlikely to get a resounding ovation tonight but the Brooklyn star will finally return to the court tonight all the same. Will some rust show against the Pacers?

Here are our free NBA picks and predictions for the Nets at the Pacers on January 5, with tip set for 7:30 ET.

After opening with the Nets favored by 6.5 points, this line steamed to -8.0 early Wednesday morning, even touching -8.5 briefly at some books. The total saw similar, bigger steam. It opened at 218.5 before Wednesday’s sun rose, and by midmorning, it had ticked all the way up to 226.0 before settling back down at 225.0 or 225.5, depending on the book.

The Nets have covered the spread in each of their last four road games. The Under is 4-1 in Indiana’s last five games. Find more NBA betting trends for Nets vs. Pacers.

Nets vs Pacers picks and predictions

This spread might be inflated by Irving’s return. The betting public undoubtedly wants to hop on that storyline, the shot maker’s entertainment value outweighing, for at least one night, many people’s opinions about Irving’s stubbornness this season.

Then again, this spread may have opened too low in the first place, given the Pacers’ backcourt remains impossibly shorthanded and is on the second night of a back-to-back. To add to the frustrations, Indiana lost to the Knicks last night by double digits. Things are not going well for the Pacers, and Irving’s return may only exacerbate those issues.

This handicap comes down to the depth of the Brooklyn backcourt in comparison to Indiana’s. In a game pitting two strengths against two weaknesses — the Nets backcourt being their strength; their frontcourt a weakness facing two quality big men for the Pacers — deference should be given to the players with the ball in their hands every play.

Brooklyn can trot out three dynamic guards now with Irving back, even if he ends up on a minutes restriction. Patty Mills and James Harden are already playing well, add in Irving and suddenly the Nets might approach the quality long sought from that superteam. Oh, and they also have some guy named Kevin Durant.

Indiana, meanwhile, had to turn to Lance Stephenson for 17 minutes on Tuesday night. How well do you know the name Keifer Sykes? If you say you know it at all, you are lying, but the Pacers have played him for 73 minutes in their last two games. It should be acknowledged, the 2015 UW-Green Bay grad has played well, scoring 32 points in the two games and dishing out 11 assists compared to only four turnovers. But the point stands: This is the state of Indiana’s roster currently.

Again, Irving’s return likely bumped this number up artificially, and if anyone is ripe for an uneven performance tonight, it is Irving. He may love the limelight, and plenty of attention has been on him all season even when he hasn’t played, but returning to the court is not the same as basking in headlines.

Irving will shoot plenty, but he probably will not make enough to push this game as high as 225.5. The original total made much more sense.

Furthermore, the Pacers are averaging 103.4 points per game in their last five games, the stretch aligning with the worst of these roster issues. Brooklyn will have to do too much of the lifting to get this past 225.5.

The Nets have not exactly been a force of late, on a three-game losing streak, games in which they were favored by 6.5, 14, and 5 points. Facing a team on a worse run should be the needed remedy, and the Pacers' five-game losing streak is only a piece of going 2-8 in their last 10.

Indiana is bordering on free fall. Irving’s return may send the Pacers to that spiral with drama.

Did you know that if you parlayed today’s NBA Nets vs. Pacers predictions and picks in a single-game parlay, you could win $26.45 on a $10 bet? 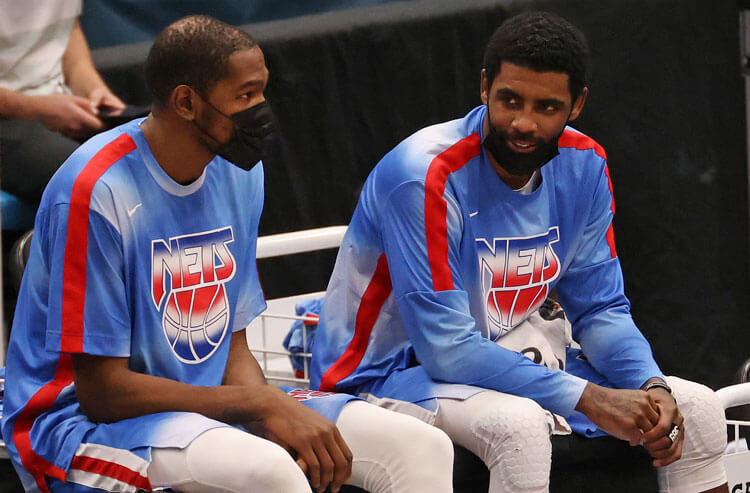 Nets vs Pacers Picks and Predictions: Kyrie's Return Gives Brooklyn a Shot in the Arm
Provided by