The Knicks host the Hornets for a Monday matinee on MLK Day, but our NBA betting picks have reason to believe that Charlotte will be rather unwelcomed guests to the Garden — despite Terry Rozier being in the mood for sharing.

On Monday, the New York Knicks will host the Charlotte Hornets in a Monday afternoon matinee on Martin Luther King Jr. Day.

Today's game will feature two teams that are playing well in recent weeks, as the Hornets just had won a four-game win streak snapped while the Knicks have won (and covered) in five of their last six — and currently are slim NBA betting favorites at home.

Here are our best free NBA picks and predictions for Hornets vs. Knicks on Monday, January 17, with tip-off scheduled for 1:00 p.m. ET.

The Knicks opened as 2.5-point favorites and, as of Monday morning, are now laying between 1.5 and 2 points. The total, which opened at 218, has also seen a slight shift, now found anywhere between 216 and 217.5.

The Hornets are 8-2 ATS in their last 10 games following a straight-up loss. Find more NBA betting trends for Hornets vs. Knicks.

Hornets vs Knicks picks and predictions

Charlotte is coming off a bad home loss to Orlando on Friday but the Hornets have shown an ability to rebound, covering in eight of in their last 10 games following a SU defeat — and they have also had two full days to rest. Charlotte is also 5-2 ATS in its last seven games as an underdog and 14-5 ATS this year when facing teams with winning records.

These are the types of games that Charlotte gets up for and there’s a lot to like for the road team earning a victory in this one. Sure, New York will have the home-court advantage at the Garden, but the Hornets are the more talented team overall and have a massive edge in the backcourt. LaMelo Ball and Terry Rozier are both capable of lighting it up in this game, and the Knicks will need somebody to step it up in order to counter their firepower.

On the wing, Gordon Hayward is also plenty capable of going out there and playing to the level of RJ Barrett. The lefty has been in a groove for New York recently, but this isn’t a matchup that he should dominate. That leaves the Knicks relying heavily on Julius Randle, who has been disappointing this year.

This is a very winnable game for the Hornets and it’s worth taking a shot on them against a Knicks team that isn’t as good as its recent winning stretch.

The last time these two teams played, they combined to score only 200 points in a game with a total of 224. Now, bookmakers are be expecting this to be a lower-scoring contest, with the total currently at 217.5.

Five of the last seven matchups between these two teams have gone Under the total and both teams have been going Under rather often recently — the Under is 3-1 in the Hornets' last four games and 8-3 in the last 11 Knicks games.

The Under also happens to be 10-1 over the last two years when the Knicks are favored to avenge a SU loss against the same opponent. The average total points scored in those games is 192.7 points per game, which is just an absurdly low number.

Rozier has been dishing out a decent number of assists recently, as the guard has a total of 24 over the last five games. That’s an average of 4.8 assists per game and he has had at least four in each of those five.

He needs to have just four assists today in order for this Over to cash.

The Hornets put the ball in Rozier’s hands a decent amount and he could have even more opportunities against a Knicks team that plays good defense. New York is going to try to force it out of Ball’s hands as much as possible, leaving other Hornets in positions where they’ll need to make plays.

This just seems like a very doable number for Roziers, so it’s worth taking a shot and laying a little juice.

Did you know that if you parlayed today’s NBA Hornets vs. Knicks predictions and picks in a single-game parlay, you could win $53.54 on a $10 bet? 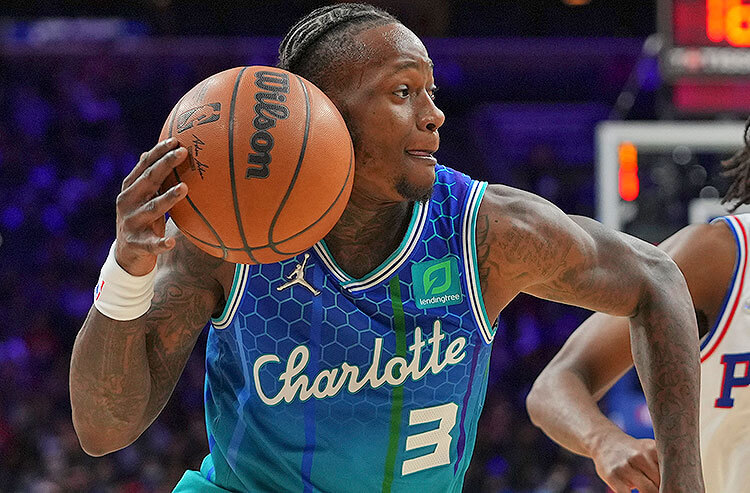