Jazz vs Lakers Picks and Predictions: Utah D Is Back To Stifling Opponents

With Rudy Gobert back, the Jazz defense is again a force to be reckoned with. Utah still may not be able to slow down LeBron James tonight — but what about the rest of his Lakers teammates? Find out in our NBA betting preview.

The Utah Jazz got right with a big win Sunday and will take that momentum to Tinsel Town, where they’re road favorites facing the Los Angeles Lakers tonight.

The Jazz snapped a four-game losing skid with a one-sided win at Denver, built on the return of defensive stalwart Rudy Gobert. Utah tries to pile on the lowly Lakers, who have dropped three in a row while bleeding 385 total points in those defeats. The NBA betting odds have the Jazz set as 4.5-point faves.

Check out our free NBA picks and predictions for Jazz vs. Lakers on Monday, January 17.

Jazz vs Lakers picks and predictions

The return of Gobert to the Utah lineup was a defensive rebirth in Denver Sunday night. After struggling to defend outside during his five-game absence, the Jazz were back to pressuring the perimeter with their big man back in the middle to bail them out.

Utah doesn’t have much to fear from the Lakers’ perimeter players, with Los Angeles ranked in the middle of the pack in 3-point shooting and knocking down an average of just over 12 triples per contest. The biggest battle will be funneling that L.A. interior attack into Gobert while jumping the passing lanes.

The Lakers rank eighth in points in the paint, scoring more than 48 per game inside the key. Even with Anthony Davis out of the lineup, Los Angeles continues to count on those short looks and transition buckets to generate offense at the rim.

Only one team attempts more shots from the restricted area than Los Angeles, which shoots 65.7% in close. That offense runs into a drum-tight interior defense from Utah, which allows just under 23 field goal attempts from the RA.

Scoring those points inside also helps out the L.A. defense, forcing opponents to inbound the ball on most possessions and allowing the Lakers to get set on the other end. But if Gobert and the Jazz's half-court defense can put the clamps on those easy looks, they’ll be able to force misses, grab rebounds, and put the Lakers on their heels.

Los Angeles has been rotten on defense during this losing skid, posting the second-worst defensive efficiency (1.271) metric over the past three games while watching foes shoot at a near-54% clip from the field. Utah owns the premier offensive rating in the NBA at 116.5 and hung 125 points on 52% shooting in the win over Denver Sunday.

If there is a way to crack the Utah defense, it’s with tempo and transition. And the Lakers are one of the better transition attacks in the league, averaging 23.3 transition points per game (second-most) and running the third-fastest pace (101.02).

When able to, Los Angeles will attempt to beat the Jazz down the floor and not allow that stingy defense to get set in the half court. Utah has struggled against up-tempo teams, lugging the second-highest scoring frequency in transition and watching those pace-pushing opponents shoot 55.6% in transition for an average of 1.2 points per possession (29th).

Los Angeles’ 96-point output in the embarrassing loss to Denver on Friday was the first time this offense failed to crack the century mark in seven games, with L.A. averaging close to 116 points per game in January so far. The Lakers will find success in transition, especially with the Jazz on the road for their second straight game.

When things go sour in La-La Land, all eyes turn to LeBron James. And with all-time Lakers great Magic Johnson blasting the team’s effort after a 37-point blasting by the Nuggets, LeBron turned to Twitter to apologize for L.A.’s recent skid.

James has been red-hot in January, scoring 30.5 points per night on 50% shooting this month. He gets a favorable matchup tonight, with Utah struggling to slow down transition attacks and LeBron ranking No. 2 in transition points per game (6.8).

Look for James to come out with energy and set the tempo tone early on... whether the rest of his team follows is another thing. This player prop is as high as 30.5 points at some books, but you can find it sub-30 with a flat rate at spots like bet365 and DraftKings.

Did you know that if you parlayed today’s NBA Jazz vs. Lakers predictions and picks in a single-game parlay, you could win $59.58 on a $10 bet? 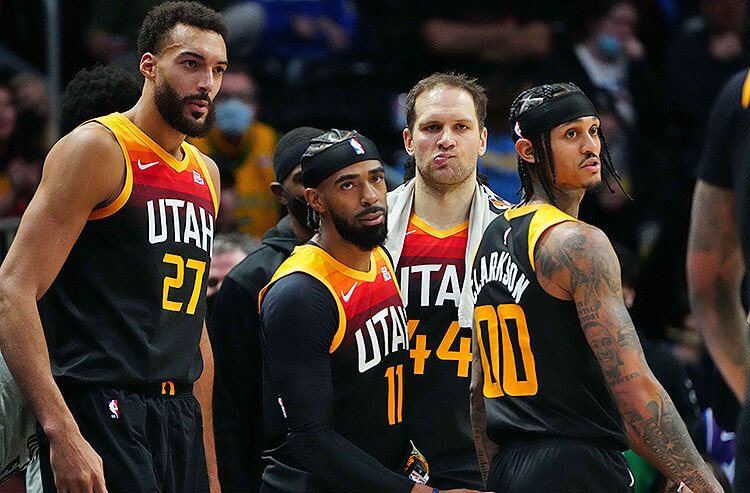 Jazz vs Lakers Picks and Predictions: Utah D Is Back To Stifling Opponents
Provided by