The Hawks are in a bit of a freefall, struggling to defend as the losses pile up. They welcome Milwaukee to town on MLK Day — but we're expecting the Bucks to trample all over the ATL. Find out why in our NBA betting picks and predictions.

The Milwaukee Bucks have had an inconsistent title defense through this season to date. For instance, they have lost three of their last four.... but the one win was a dominating victory over one of the best teams in the NBA — the Golden State Warriors.

Meanwhile, it has been a disaster of a first half for the Atlanta Hawks. After falling two wins shy of the NBA Finals last year, they sit in 12th in the East and have lost five in a row.

But are the Hawks a live NBA betting home underdog on Martin Luther King Jr. Day in this Eastern Conference Finals rematch?

Find out in our free NBA picks and predictions for Bucks vs. Hawks on Monday, January 17.

The Hawks opened this Eastern Conference matchup as 5.5-point home pups and the line hasn’t seen much movement as of Monday morning. The total, on the other hand, has seen a bit of action moving from 228.5 to 231.5.

The Hawks are 0-5 ATS in their last five games overall. Find more NBA betting trends for Bucks vs. Hawks.

Bucks vs Hawks picks and predictions

To call the start of this season a disaster for the Hawks might be an understatement. They were tied 2-2 with the Bucks in last year’s Eastern Conference Finals and came up just short, falling in six games. But instead of taking the next step forward, did the Hawks already peak?

Because right now, it looks like they have taken a massive step back.

Atlanta is in a horrendous stretch, dropping five games in a row fall to 17-25 for the season — and it currently sits in 12th place in the East. The offense has stalled out and the defense is as bad as it’s ever been.

Since Dec. 17, Atlanta is just 3-11 SU, with the offense ranking 16th in offensive rating and the defense coming in at 29th over that same span. To make things worse, the Hawks are 4-13 ATS in their last 17 games overall.

The team is trying to shake things up with the recent trade of Cam Reddish to the Knicks but if you’re like me, you’re not really sure if that helps anything.

Now, they’ll have to deal with a ticked-off Bucks team that is coming off a tough loss against the Raptors... but the game before they showed just how dangerous it can be in a 118-99 thumping of the Warriors... where the Bucks at one point led by 40.

Milwaukee has missed point guard Jrue Holiday, who is still dealing with an ankle issue and will sit this one out, but overall the Bucks, who rank in the Top 10 in both offensive and defensive rating, are a matchup nightmare for the Hawks at both ends of the floor.

Trae Young might get his, but other than that it could be a rough night against Giannis Antetokounmpo & Co. I would not bet on the Hawks getting revenge in this Eastern Conference Finals rematch.

The total for this Eastern Conference matchup has risen as high as 232 at some books.

That is a massive number.

The Bucks offense — when clicking — is one of the most dangerous in the NBA and is going against a Hawks defense that leaks like a sieve. On the other side, Atlanta has the NBA’s second-rated offense but the way these teams are coming into this one, this number is just too high.

While the Bucks had a nice offensive outburst against the Warriors, they are averaging just 108.1 points over their last seven games while shooting 43.1% from the field. That ranks 27th in the NBA over that span — and is despite Giannis playing really well right now.

Meanwhile, that No. 2-rated Hawks offense has really hit a rough patch. Over this 3-11 run, they are scoring just 108.6 points per game and rank 18th in field goal percentage and now they’ll face a long and athletic Bucks unit that ranks seventh in defensive rating.

While the Hawks are struggling, Trae Young is doing the only thing he knows to try and fix it: Shoot, shoot, and shoot some more.

Young is averaging 30.1 points over his last 14 games, despite shooting just 33% from 3-point range over that span. So, we are looking at him to go Over his point total of 27.5, a number he has eclipsed nine times in that 14-game span, against a Bucks’ team that will be without one of its best defenders.

Holiday is not only one of the Bucks' best defenders but one of the best perimeter defenders in the NBA, which means Young should have more room to work. On top of that, Young put up 42 on the Bucks earlier in the season — with Holiday in the lineup.

Did you know that if you parlayed today’s NBA Bucks vs. Hawks predictions and picks in a single-game parlay, you could win $59.58 on a $10 bet? 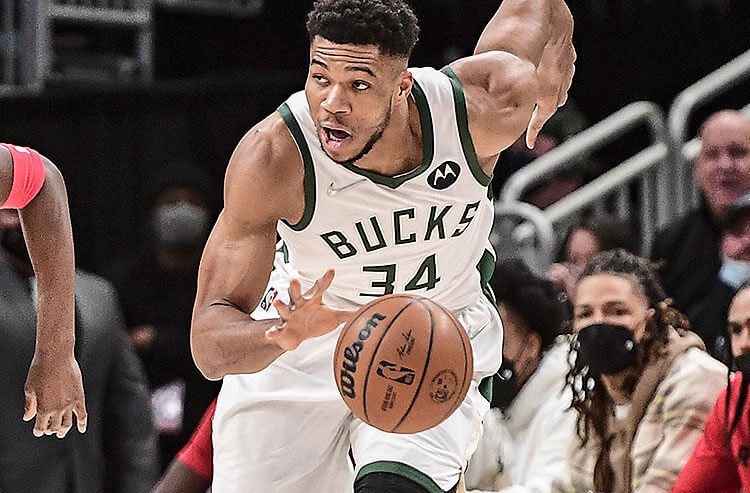