The Boston Celtics are on the verge of the NBA Finals. Standing in their way is a Miami Heat squad that looks like it's ready for its season to end. See how we're fading the Heat and backing Jaylen Brown's hot hand with our Game 6 player prop picks.

Jayson Tatum’s near triple-double and Al Horford’s efficiency spurred the Boston Celtics to the brink of the NBA Finals on Wednesday, of course helped by Jaylen Brown’s hot shooting. But most of all, the Miami Heat’s offense continued to sputter.

Give credit where credit is due: The Celtics have had the best defense in the NBA in 2022, and it’s showing through in these Eastern Conference Finals. Banking on that at home may be a key to turning a profit tonight, as we bring you our NBA player prop picks for Game 6…

No Buts about it

You’ve been watching, right? Miami has averaged 98.2 points in this series, lowlighted by 81.0 in the last two games. Remove Game 1 from the math — when neither Marcus Smart nor Al Horford was available for Boston — and that series-long average falls to 93.25. Finding ways to fade that offense right now is sensible, obvious and needed, the last of those adjectives simply because this should be our last chance.

Jimmy Butler has been at the core of the problem of late. After scoring 41 points in that Game 1 victory, he has managed just 27 combined in the last three games, going 10-of-40 from the field and 1-of-7 from deep.

If Butler is injured, he will never admit it. He is not even listed on Miami’s extensive injury report. Butler will play through whatever discomfort as long as he is able to, and he will doom the Heat in the process.

Yet, his point total Over/Under remains above 22 points. How anyone expects Butler to score more than a quarter of what could be Miami’s total output is a bafflement we will not spend time on. Rather, we will profit from it.

This is less a shot at Bam Adebayo than it is a shot at all of Miami’s offense. If anyone on the Heat deserves credit this series, it’s Adebayo. The agile center has averaged 14.8 points and 7.8 rebounds per game as the Heat have otherwise struggled.

But his 2.5 assists prop? At positive money? That would rely on other Miami players actually making shots.

Miami isn’t even making three out of every 10 non-Adebayo shots. So, to exceed this prop, one could expect Adebayo to need to dish out 11 shot opportunities.

Yet, betting he will not pick up a third assist can be had at positive odds.

What can Brown do for you?

Boston wants to finish this series tonight. Going back to South Beach for a Game 7 would be a moment of tension the Celtics need to avoid to better their chances in the next round against the Warriors. Boston knows this. The fans know this. Ime Udoka knows this.

So, when the Celtics get rolling, Udoka will push the gas pedal. He will not ease up late to rest his stars. He will steel against Miami’s grit until Erik Spoelstra waves a white flag that would match Tyler Herro’s sideline fit.

The greatest threat to Jaylen Brown not raining threes again is not his shooting stroke. It would be Udoka pulling him early in a rout. A clinching game reduces that risk.

Brown has hit at least four shots from beyond the arc in three of this series’ five games, shooting 43.6% from deep. Nonetheless, him doing that once more can be had at +140 odds.

Perhaps Brown cools off, but he has hit 39.6% of his threes this postseason while shooting 6.6 per game. Across a 16-game sample size, those are not the numbers of a player one can assume is about to cool off.

And on a night when Udoka should play Brown through the proverbial tape, he will get a few extra chances to chuck. 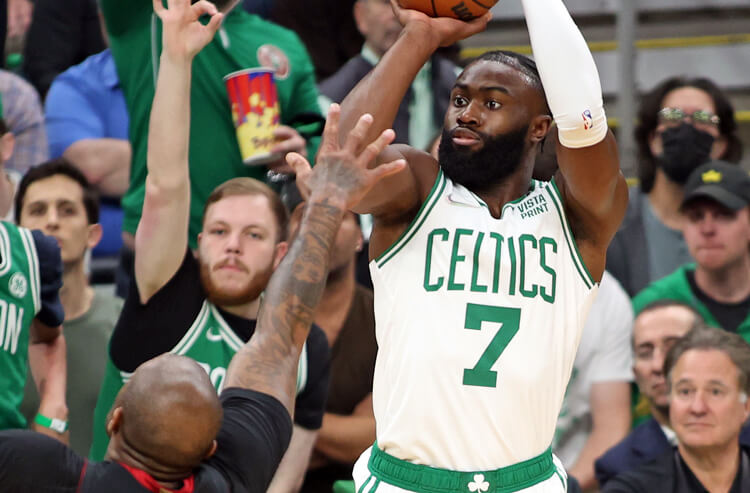