NBA Betting Notebook, Odds, and Schedule: Warriors Kings of the West Once Again

The Warriors took the scenic route back to the NBA Finals, while the Celtics appear primed to join them after several bumps in their journey. From the title chase to some early offseason drama, see how this week's NBA news affects the betting landscape.

Welcome to another edition of the NBA betting notebook. There are single-digit games remaining in the 2021-2022 NBA season, but that doesn’t mean that league news has slowed down one bit.

Our NBA notes today detail the All-NBA winners, Miami’s last stand, the Warriors' road to redemption, and a tense negotiation in Brooklyn. Let’s dive in.

The Golden State Warriors defeated the Dallas Mavericks Thursday night, advancing to their sixth Finals in the last eight seasons. That eight-season stretch has only been matched by four other teams in NBA history, most recently by Michael Jordan’s Chicago Bulls. It’s a remarkable run, made all the more compelling by the two down seasons that came before this one. The Warriors lost Kevin Durant, then won 15 games in 2020, while Klay Thompson went nearly 1,000 days between professional basketball games. And after all that, they’re right back on top — a commanding -145 in NBA title odds.

Game 5 itself was notable because the Warriors once again received major contributions from role players including Kevon Looney, Andrew Wiggins, and Nemanja Bjelica. Klay Thompson also completed his personal redemption arc, capping off the series with 32 points and 8-16 from three. As he noted in his post-game presser, this time last year he was just beginning to be able to jog again.

But it was Steph Curry who deservedly received the first inaugural Magic Johnson Western Conference Finals MVP trophy. And who remains on top of traditional Finals MVP odds too.

The Western Conference Finals wrapped up last night with the Golden State Warriors taking down the Dallas Mavericks — it’s only to be determined who will join the Warriors in the NBA Finals. But although the Heat aren’t eliminated yet, many are treating tonight’s game like a formality, including Draymond Green.

Dray thinks the Warriors will face the Celtics in the Finals pic.twitter.com/inNeblMdjF

The East Finals have been a bizarre affair, full of frequent blowouts and more lineup uncertainty on a game-to-game basis than any series in recent memory. Even though both Boston and Miami are banged up, it’s clear that the Heat have had the worst of it, with severe limitations or absences from Kyle Lowry, Jimmy Butler, Tyler Herro, and PJ Tucker. Now, the Heat face elimination in Boston and are hefty underdogs to keep their season alive (as high as +8.5 at some books).

This week also saw the announcement of the 2021-2022 All-NBA teams, the last of the major awards to be doled out by the NBA. Here are the teams in full:

There aren’t many surprises, though arguments could be made for including any of Rudy Gobert, Jimmy Butler, Bam Adebayo, Donovan Mitchell, and Jaylen Brown over some of the Third Team recipients. Someone who did not have any argument however was Kyrie Irving, who played just 29 games out of a possible 82. Despite his truncated season, Jalen Rose voted him 3rd Team (and was rightly mocked by Stephen A. Smith when he revealed as much).

Also of note, LeBron James once more broke his own record by adding an 18th All-NBA selection. The next highest career total is 15, a tie between Kareem Abdul-Jabbar and Kobe Bryant. LeBron truly is in a league of his own.

The awards also had substantial contract implications, with Karl Anthony-Towns and Devin Booker both now eligible to sign a $211 million supermax extension this offseason. Trae Young meanwhile will see his current rookie max contract extension grow by about $35 million.

Brooklyn and Kyrie in extension standoff

Speaking of Kyrie, a report by Kristian Winfield of the New York Daily News on the state of the Brooklyn Nets franchise has raised some eyebrows league-wide. It appears Sean Marks and Nets ownership are not willing to offer Irving a long-term contract due to his frequent absences and decision to not get the COVID-19 vaccine that caused him to miss most of the season.

Winfield notes that playing hardball with Kyrie might push Kevin Durant out the door and that team officials have not spoken with KD since they were unceremoniously swept by the Boston Celtics in the first round.

Good morning: The Nets are playing with fire.https://t.co/Ff3rI22GI4

While Marks and the Nets are understandably frustrated with the Irving situation, this is the life they chose when they brought the pair to Brooklyn in 2019. There is no way to readily replace Irving if they let him walk, and his player option allows him to control his own fate and avoid any unfavorable trade.

The Nets might not like it, but paying Kyrie is the price to see if a core of Irving, Durant, and Ben Simmons can be a championship group with a full year's experience together. If the Nets really push Kyrie and KD out the door, this Brooklyn era will finish as one of the most disappointing super team experiments of all time.

This week also saw significant front office shakeups in the Western Conference. Tim Connelly stepped down from his role as president of basketball operations with the Denver Nuggets in order to take over that same role for the Minnesota Timberwolves. Why would Connelly leave the back-to-back MVP and a Nuggets team set to contend for years to come? Reportedly, Nuggets ownership wasn’t willing to meet the hefty raise he was offered by the Wolves.

Minnesota has an agreement with Denver Nuggets President Tim Connelly to become the Timberwolves’ new President of Basketball Operations on a five-year, $40 million deal with a kicker for ownership equity, sources tell me and @JonKrawczynski.

The Nuggets appear confident that their internal replacement Calvin Booth will be able to replicate Connelly's work, just as Connelly stepped in to replace Masai Ujiri before him. But eventually bleeding executive talent like this is going to hurt the franchise. If the Kroenkes aren’t willing to shell out for their general manager, it raises questions about the financial sustainability of the Nuggets as a championship-caliber team.

Jokic is due a big raise, and in order to contend, Denver will need to pay the luxury tax. Are they willing to pay the tax for multiple years in a row to win it all? All signs currently point to no, meaning the Nuggets' window to contend might be shorter than their talent would suggest.

NBA schedule for this weekend

Check out the full NBA schedule, matchups, odds, and more! 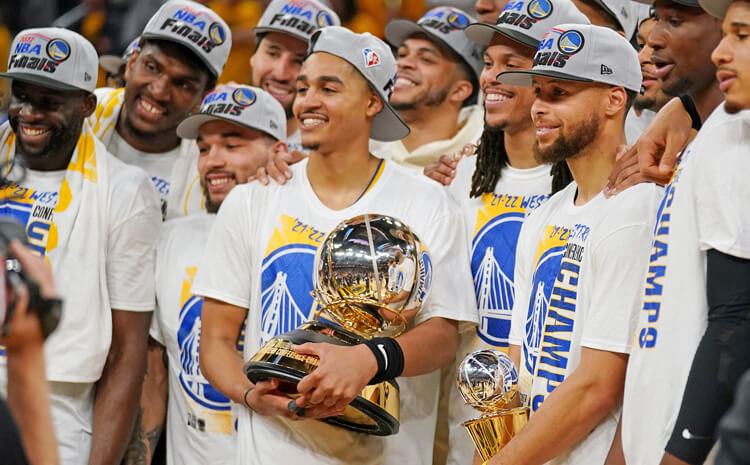 NBA Betting Notebook, Odds, and Schedule: Warriors Kings of the West Once Again
Provided by