Dallas has been routinely shutting down opposing offenses since the calendar flipped to 2022, and while they're missing weapons on offense, the Mavs should have more than enough to do away with the limited Clippers — as our NBA betting picks explain.

The Dallas Mavericks look to stay hot as they welcome the Los Angeles Clippers to American Airlines Center on Thursday night.

The Clippers have been in a freefall ever since losing Paul George to a knee injury and oddsmakers expect their struggles to continue with NBA betting lines opening with the Mavs as 6.5-point home favorites.

Here are our best free NBA picks and predictions for Clippers vs. Mavericks on Thursday, February 10, with tipoff at 8:30 p.m. ET.

(Editor's Note: This preview was published prior to Thursday afternoon's announcements that the Mavericks had traded Kristaps Porzingis for Spencer Dinwiddie and Davis Bertans.)

This line hit the boards with Dallas installed as a 6.5-point favorite with the total at 214.5. As of noon ET, the line hasn't moved while the Over/Under has ticked up ever-so-slightly to 215.

When these teams previously played against each other way back in November, the Mavs won 112-104 in overtime, covering as 2.5-point road dogs.

The Under is 39-14-1 in the Mavericks' last 54 home games. Find more NBA betting trends for Clippers vs. Mavericks.

Clippers vs Mavericks picks and predictions

The Clippers enter this game coming off back-to-back ugly losses against the Grizzlies and Bucks and have gone 0-4 ATS in their last four games.

The Mavericks have won three games in a row and are fresh off a 30-point rout of Detroit. Strangely enough, they lost back-to-back contests against two of the worst teams in the NBA last week but they've still gone a sizzling 16-5 SU (13-8 ATS) with a net rating of plus-9 since December 31. Surprisingly, defense has been the biggest reason for their recent success with Dallas ranking second in the league in defensive rating since that date.

That's bad news for a Clippers team that ranks just 25th in the league in offensive rating since losing George just before Christmas.

The Clips recently traded for Norman Powell and while the high-scoring guard has been productive, he hasn't helped raise their overall play on the offensive end of the floor. Powell scored 28 points in his L.A. debut on Sunday but the rest of the team shot a miserable 39% from the floor. And against the Grizzlies on Tuesday, the Clips scored 109 points with 17 turnovers and a 44.9 FG%.

Los Angeles was also brutal defensively in those contests, surrendering 137 points on 54.5% shooting to the Bucks and 135 points on 51.5% versus the Grizz. With the Clips struggling on both ends of the floor, we're fading them against a Mavs side that is 5-1 ATS in its last six games at home.

The Clippers' offense has been hurting this season without Kawhi Leonard and George but the Mavs' offense is dealing with some key injuries of its own. Tim Hardaway Jr. (14.2 points per game) suffered a broken foot on January 25 and Dallas lost second-leading scorer Kristaps Porzingis (19.2 ppg) to a knee injury four days later.

Since losing Porzingis, the Mavs are averaging just 107.4 ppg in regulation despite playing against some of the worst defensive teams in the league over that five-game span. Luka Doncic (26.2 points, 9.2 assists, and 8.9 rebounds per game) is one of the best offensive players in the world but there's a massive dropoff after him and Jalen Brunson.

That said, Dallas has been incredible on the defensive end of the court, holding opponents to a measly 99.7 ppg over its last 22 games and surrendering fewer than 100 points in three straight contests. With the Mavs going an incredible 22-6 to the Under at home this season, take the Under tonight.

The Clippers' current starting five is one of the least impressive in the league and L.A. has often found itself trailing early. Since losing George on December 22, the Clippers have an average first-half margin of just minus-6.4 ppg. They trailed the Grizzlies by 15 points at the half on Tuesday and had a 9-point halftime deficit versus the Bucks on Sunday.

Meanwhile, the Mavs are limiting foes to a measly 51.6 first-half ppg and had a whopping 14-point lead after 24 minutes against the Pistons on Tuesday. Grab Dallas on the first-half spread.

Did you know that if you parlayed today’s NBA Clippers vs. Mavericks predictions and picks in a single-game parlay, you could win $59.58 on a $10 bet? 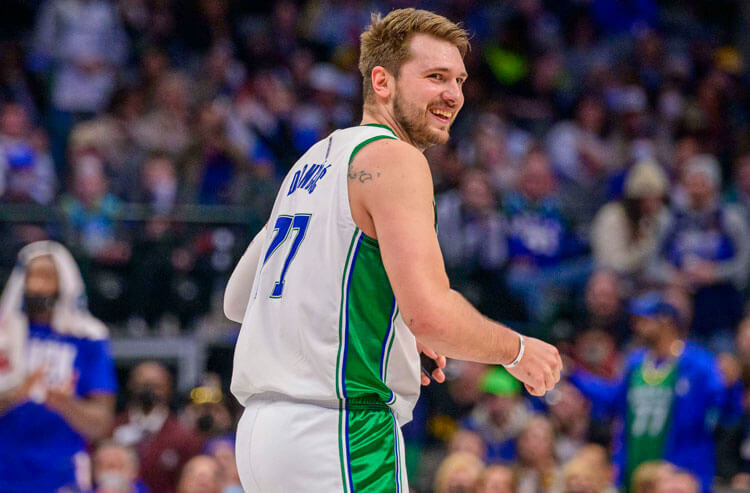 Clippers vs Mavericks Picks and Predictions: Dallas Takes Care of Business
Provided by