With high-level play on both ends and a stabilizing force in Ja Morant at the heart of it all, Memphis is as reliable as it comes in NBA betting. Then, there's Detroit. We're zeroing in on the favorites in our Grizzlies vs. Pistons picks and predictions.

Three years ago, the Memphis Grizzlies steered all the way into a rebuild when they traded the last Grit N Grind pillar in Mike Conley. That rebuild was short-lived, as Memphis got a little lottery luck and landed Ja Morant, who's well on his way to changing the franchise forever.

The Detroit Pistons, tonight's NBA betting underdog, can't sink much lower but will have to try and find hope in the path their opponent has taken in recent years. Just as Morant reversed Memphis' fortunes, Detroit has its hopes in No. 1 overall pick Cade Cunningham. His presence alone gives the Pistons reason for optimism in the future, but our NBA picks and predictions are expecting more sorrows in the present for a talent-poor Detroit team.

The spread opened as low as Grizzlies -9.5 but was unsurprisingly bet up to between -11 and -12 at time of writing, depending on the book. The total hit the board at 223.5 and ticked up to 224.5 by Thursday morning.

The Pistons are 0-4 ATS in their last four games on one day of rest. Find more NBA betting trends for Grizzlies vs. Pistons.

Grizzlies vs Pistons picks and predictions

At this point in the season, past the halfway mark, consistency is a hallmark of this Grizzlies team. On the back of high-level play on both ends, Memphis sits third in the NBA at 38-18 and hasn't yet had even signs of regression, losing more than back-to-back games just twice, with both streaks capped at three games each.

Ja Morant is the great stabilizer for a team that sits fifth in the NBA in adjusted net rating. The Grizzlies' position in the Top 10 in both offensive and defensive rating, adjusted for opponent, is a position typically saved for legitimately elite NBA teams. We're almost at the home stretch of this NBA season and Memphis has shown nothing to disqualify it from that classification.

While the Grizzlies are among the NBA's most prominent sure things, their opponents tonight in the Detroit Pistons are anything but. Detroit's status as a league bottom-feeder is made worse by its current situation. The team's future, Cade Cunningham, was quickly becoming its present with tangible second-half development as a rookie but that has been derailed lately by a hip pointer that has kept him out since February 1, with a questionable tag still hanging over him.

Sending the Pistons into further uncertainty is the status of leading scorer Jerami Grant, who has been the subject of trade rumors all season and is among the most likely bigger name candidates to be moved during today's deadline. Grant's status by tonight will have a major impact on the shape of Detroit's roster, as a trade would leave the Pistons severely shorthanded at tipoff. It won't, however, have any impact on the result of this game.

Grant or no Grant, Detroit can't hang with this Memphis team. The Pistons routinely get blown out, including by 30 points against these same Grizzlies just over a month ago. The Pistons' average scoring margin is -9.8 this year and -15.75 in the recent four-game stretch without Cunningham. Tonight will see yet another uncompetitive 48 minutes from Detroit in an easy Memphis win.

With so much uncertainty around the Pistons ahead of the deadline and with Cunningham again questionable, we're going to dodge the game total altogether and look to the Grizzlies' team total, on the board at 117.5.

Memphis came out of the gates strong, ranking seventh in offensive rating as of December 31, at 111.4, but has gone up another level since then. From Dec. 31 to now, the Grizzlies are sixth in the NBA in offensive rating at 114.6 during a 20-game stretch that has seen them go 16-4 and average 116.9 points per game. During this stretch, they've topped 117 points on 13 occasions and appeared matchup-proof, having just hung 135 points on a Clippers team in the Top 10 in defensive rating.

Over that same stretch, the Pistons' defense has gotten even worse with a season-long defensive rating of 113.78, worsened by a mark of 115.7 since the new year. Such a talent-poor team is going to be in a bad matchup almost any night, but this is a particularly bad one.

There's been no stopping these Grizzlies in recent weeks and against the lowly Pistons, the points are going to pour in.

Among many other things, the Pistons are terrible at defending the 3-point line. Opponents are hitting 37.2% of their 3-point attempts against Detroit, which is the second-highest mark in the league behind just the Blazers (37.4%).

As a team, the Grizzlies aren't exactly primed to exploit this particular weakness. Just 34.8% of Memphis' shots are from beyond the arc, which is the third-lowest rate in the NBA. One player, in particular, is going to exploit that flaw, however, and that's Desmond Bane.

The soon-to-be 3-point contest participant is among the league's best marksmen, as Bane's hitting 41% of his threes this year on 6.9 attempts per game. Of the 30 players taking more threes per game than Bane, only Patty Mills (42%) is converting them at a higher rate.

There aren't many matchups better for Bane to get rolling again from deep, so count on him to top his 3-pointers made prop tonight in Detroit.

Did you know that if you parlayed today’s NBA Grizzlies vs. Pistons predictions and picks in a single-game parlay, you could win $57.28 on a $10 bet? 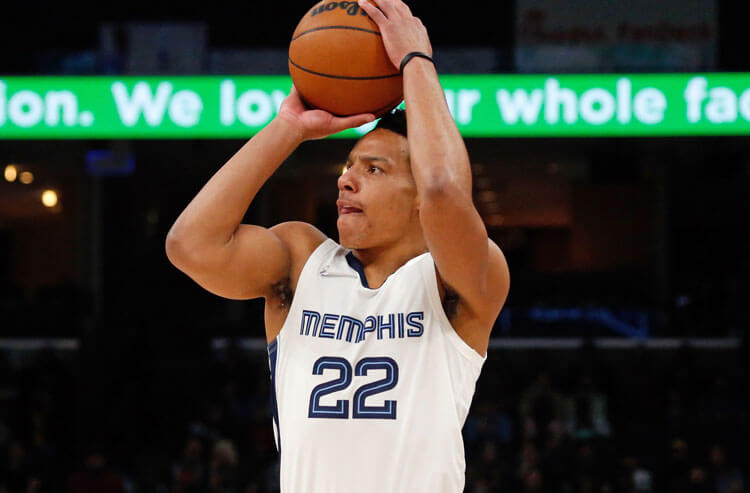 Grizzlies vs Pistons Picks and Predictions: Steady Memphis Breezes by Detroit
Provided by