Bucks vs Suns Picks and Predictions: Suns Get Finals Revenge at Home

It's Milwaukee and Phoenix in a rematch of last year's NBA Finals, though this time, the runners-up are favored, and with good reason. Find out why to expect a peak effort — and result — from the home side with our Bucks vs. Suns picks.

In a rematch of last year’s NBA Finals, the Phoenix Suns host the Milwaukee Bucks with revenge on their minds. The Bucks enter this one after having won four games in a row, but the Suns have won three in a row themselves.

Which of these red-hot teams will win in one of the most anticipated matchups of the entire season? Keep reading our Bucks vs. Suns NBA picks and predictions for Thursday, February 10 to find out.

The Suns opened as 3.5-point favorites in this NBA Finals rematch, and that has remained the spread at most books. Meanwhile, the total opened at 232.5 and has stayed still there.

USA: TNT Thursdays: Opt in and place a 3+ leg, $10+ same game parlay (with cash) on any "NBA on TNT" game at FanDuel and get $10 bonus credit — regardless of if your bet wins or loses! Opt In Now

The Suns are 4-1 against the spread in their last five games against teams with winning records.  Find more NBA betting trends for Bucks vs. Suns.

Bucks vs Suns picks and predictions

The Suns have won three in a row coming into this meeting with a Bucks team that has won four in a row. This NBA Finals rematch is happening at the perfect time, as these teams are both relatively healthy and playing some fantastic basketball. It is, however, Phoenix that should be the team to emerge with a victory in what should be a fascinating battle.

Not only should the Suns have a massive home-court advantage in this game, but the team has also made some roster changes to strictly combat this Bucks team. Phoenix brought in JaVale McGee and later added Bismack Biyombo, and a lot of that had to do with the team getting crushed by Milwaukee in the minutes in which Deandre Ayton had to sit on the bench in that series. The Suns did have success in limited minutes with Saric as a small-ball center, but Saric is out for the season — and missed a majority of that series. With that in mind, having size on the bench was the next best thing for Phoenix, and McGee’s length should disrupt Giannis Antetokounmpo at least a little here.

Also, Chris Paul was not fully healthy when these teams met in the Finals, but the Point God is looking pretty good right now. Paul has recorded double-doubles with points and assists in 10 of his last 12 games, and he has been his usual clutch self all year long. When Phoenix needs him to turn it on as a scorer, the veteran is always able to get to his mid-range shots.

Devin Booker has also been looking like the best shooting guard in basketball this year, as he’s averaging 25.7 points per game and is doing so in an efficient way. Booker has been locked in when facing tough opponents, too. With that in mind, he should have a big game against the team that crushed his championship hopes last year.

It’s also worth mentioning that Mikal Bridges just keeps getting better and better for Phoenix. He should hold his own as the primary defender on Khris Middleton in this game, but he could also make some plays on offense. He’s been in a groove lately, scoring 15 or more points in six of his last seven contests.

The stakes were a lot higher the last time these two teams locked horns, but two of the last three games in the NBA Finals went Under the total. And while this game won’t quite have the same intensity, there should be a playoff-like feel to this one. These teams are going to have bad blood with one another the second they get back on the court, and that is why this game should end up being a grind-it-out affair.

The Under is also 15-6 in the games in which Milwaukee has played against teams with winning records this season, and the average total points scored in those contests was just 216.2. With the way both of these teams are capable of locking in, it shouldn’t surprise anybody if these two comfortably go Under in this one. Both of these teams are in the Top 10 in defensive rating this season, and Phoenix is actually fourth in the NBA.

The Suns will undoubtedly be the hungrier team when these two take the floor, and that can’t be discounted in a regular-season game. Milwaukee has done a nice job of getting up for road games recently, but Phoenix is going to come out with all the energy in the world here. The Suns are also 4-1 against the spread in their last five games against teams with winning records, so they have been handling their business against good basketball teams.

There’s just a whole lot to like about Phoenix in this matchup, and this spread shouldn’t be big enough to scare anybody off.

Did you know that if you parlayed today’s NBA Bucks vs. Suns predictions and picks in a single-game parlay, you could win $26.45 on a $10 bet? 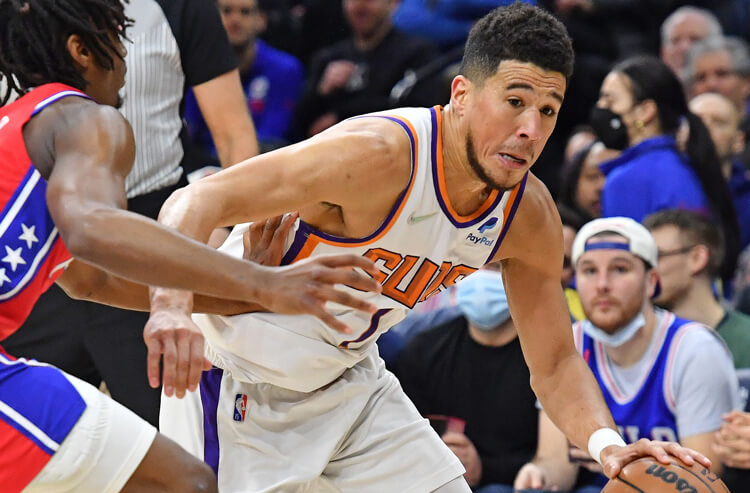 Bucks vs Suns Picks and Predictions: Suns Get Finals Revenge at Home
Provided by