NBA trade deadline day will be capped off by an NBA Finals rematch, as the Suns and Bucks meet for the first time since Game 6. We're looking at one of the league's best 3-and-D wings in that rematch among others in our best NBA player prop picks tonight.

Today is NBA trade deadline day, which is one of the most exciting days on the schedule during the season. With so many moving parts there can be some extra NBA betting value to be found among tonight’s seven games.

We take a look at Ja Morant as he and the Grizzlies visit the Pistons, and what’s the best player prop for tonight’s NBA Finals rematch between the Bucks and Suns?

Check out our NBA player prop picks for Thursday, February 10, as we bank on some of the NBA's best to do their thing.

Do it all Ja

The Memphis Grizzlies continue to be one of the best stories going this NBA season. Led by MVP candidate Ja Morant, the Grizzlies sit third in the Western Conference. Tonight, they head into a matchup with the lowly Detroit Pistons as winners of three in a row and six of seven. It's a matchup where Morant looks primed for another all-around performance.

Morant makes his MVP case by doing it all for the Grizz. He’s a scorer, he’s a facilitator, and he even puts work in on the glass. On top of averaging 26.5 points per game, he also dishes out 6.8 assists and 5.9 rebounds per contest.

Those numbers have been even higher basically since the start of 2022. Morant is now up to 7.1 assists and 6.2 rebounds over his last 19 games, which includes grabbing nine boards and handing out six assists in a meeting against the Pistons back on Jan. 6.

It appears Detroit won’t be able to slow him down this time, either. The Pistons, who have won an NBA-low 12 games this season, rank dead last in rebounding percentage and 25th in opponent rebounds per game. They also rank 24th in opponent assists per game.

With a rebounding + assists total for Morant set at 12.5, a number he’s gone Over 11 times in that 19-game stretch, we’re thinking Over once again.

The Brooklyn Nets will be one of the most talked-about teams on trade deadline day as the James Harden saga may be hitting its crescendo. That could also create some betting value for tonight’s opponent, the Washington Wizards, and Kyle Kuzma in particular.

The Wizards are another team where things have gone off the rails quickly this season. After an excellent start to the season, they have lost eight of their last nine and fallen all the way out of a play-in spot. On top of that, Bradley Beal is done for the season with a wrist injury.

The Wizards have used a small-ball lineup for the most part this season and as a result, Kuzma has become the team’s most reliable rebounder, grabbing 8.7 boards per game. That bumps up to 9.9 over his last 21 games.

Now, he has struggled when facing good rebounding teams who can have some presence in the paint, but the Nets aren't that.

Brooklyn, still without Kevin Durant, has lost nine straight games and looks lost in the process, including on the glass. Over that losing streak, the Nets rank 27th in rebounding percentage and 22nd in opponent rebounds per game.

On top of no KD, Harden is out for this one, trade or no. So, too is LaMarcus Aldrige, while Nic Claxton is questionable. Basically, anyone of rebounding significance for the Nets. Not to mention the fact the Nets could be down some bodies if the Harden trade actually happens.

Bet on Kuzma to go Over his rebounding total in this one.

The Milwaukee Bucks and the Phoenix Suns will meet for the first time since last year’s NBA Finals, which the Bucks took in six games. So, you know we’re going to have a player prop for this one.

Both teams have their sights set on a return to the Finals. The Bucks are rounding into form and have climbed into second place in the Eastern Conference while ranking eighth in net rating, while the Suns lead the West and are second in net rating.

There is little that separates these two teams, so where is the player prop angle?

Well, the Bucks have picked up their play of late but they still have a glaring flaw. The Bucks allow the most 3-pointers per game in the NBA at 41.3 per contest, which is 2.3 more than the next closest team. So, that should mean plenty of opportunities for the Suns to hit some threes.

My favorite bet of the bunch is Mikal Bridges over 1.5 made threes. Bridges is your prototypical 3-and-D wing and an important piece for the Suns. He is hitting a respectable 36.9 percent of his 3-point attempts this season and has picked himself up after a bit of a slump to start the New Year.

Bridges has hit two or more threes five times over his last seven games and I like him to take advantage of his added opportunities tonight. 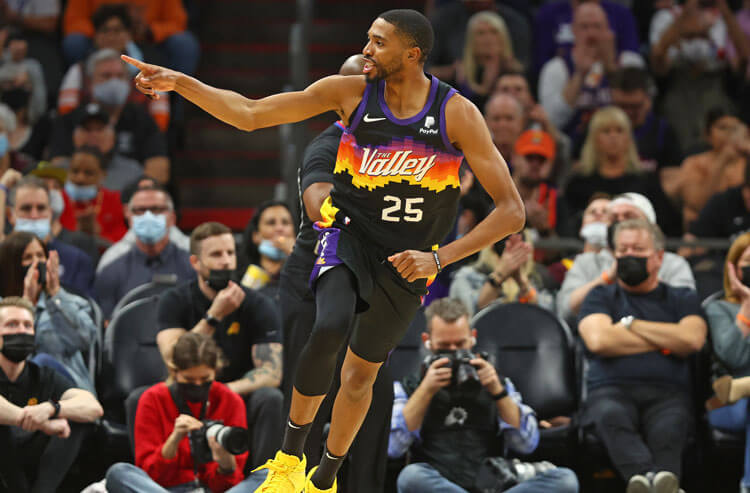