Milwaukee took Game 3 from ATL, which might have lost far more than just the game. With Trae Young nursing a sore foot, can the Hawks be backed for NBA betting in Game 4? Our Bucks vs. Hawks picks have your answers.

Injuries once again take center stage for NBA playoffs betting as the Milwaukee Bucks and Atlanta Hawks get set for Game 4 of the Eastern Conference finals.

With the Hawks trailing 2-1, franchise PG Trae Young is battling a bum ankle, obviously putting underdog ATL at an even further disadvantage.

How will the matchup shake out? We've got your breakdown with our Bucks vs. Hawks picks and predictions for Tuesday, June 29.

About an hour before game time, Atlanta star Trae Young (ankle) was ruled out, and Milwaukee surged from -6.5 to -8 at The SuperBook at Westgate, then shortly thereafter moved on to -8.5 and -9. The Bucks opened -6 Sunday night. "There's plenty of Bucks support at -6 and -6.5," SuperBook risk manager Neil Fitzroy said at 8 p.m. ET. "We had some buyback on Hawks +9. Not a big decision currently, but if it lands Bucks by 7 or 8, it's no good." The total had already fallen 5 points, from 223.5 to 218.5, by this morning, when Young was questionable. Shortly before tipoff, the total is 215.5. "We got the number where it needed to be pretty quickly. We took the first Under bet at 220.5," Fitzroy said. "It's not much of a decision. Some two-way action at 218.5."

The Under is 6-1 in the Hawks' last seven games and 7-2-1 in the Bucks' last 10 games overall. Find more NBA betting trends for Bucks vs. Hawks.

Stop us if you've heard this before: an NBA playoff game's outcome will likely be governed by injury.

This time, it's ascendant superstar Young, who bruised a bone in his right foot in the closing seconds of Game 3's third quarter. Young stayed in the game but would score just three of his 35 points after the injury.

Young's status remains questionable, but given that he didn't leave Game 3 and will have had time to rest, it seems likely that he'll at least suit up for what's certainly a must-win game for the Hawks.

But Young's quickness off the bounce is one of his most lethal traits, and playing on a tender ankle against Jrue Holiday — arguably the best defensive PG in the league — isn't a recipe for success.

That fourth quarter made all the difference and foreshadowed what could happen in Game 4 if Young is still hobbled. Atlanta was outscored 30-17, and while Khris Middleton went all Rambo down the stretch, he's been making that somewhat of a habit.

Mike Budenholzer has, finally, figured out this season that you need to play your stars 40-plus minutes in the playoffs. While his hand has been somewhat forced by Milwaukee's painfully thin bench, he's at least leaving the game in the hands of his best players, and lessening the margin for self-sabotage.

Milwaukee's best (pun possibly intended) showing up for this game and simply outclassing Atlanta could be the difference. The Hawks certainly have the offensive depth to help make up for Young — they won't be completely rudderless if he's still hurt. But they've relied on him so much these playoffs (he leads all still-active players in playoff usage by a fairly wide margin) and the rest of Atlanta's roster has very little experience to fall back on in this type of situation.

In general, don't sleep on the Bucks' D, despite their offense stealing the show this year. Keep in mind that the main cogs on this roster formed one of the NBA's best-ever defenses last year, and swapped increasingly useless Eric Bledsoe for an All-Defense first-teamer. They lead all playoff teams in defensive rating.

The Bucks will want to put their hooves on the Hawks' necks after two seasons of playoff disappointment. Middleton's a certified killer, Holiday will score more than six points, and Giannis Antetokounmpo (you know, the two-time MVP) is in prime form, and even hitting 75 percent from the free-throw line over the past two games.

With Young's impact a question mark, this is a Fear the Deer situation.

Although Game 1 crept Over the total, Games 2 and 3 fell fairly short, hitting the Under, safely, by 10 and nine points, respectively.

The books have hedged a bit, scaling Game 4's total down to 221 from Game 3's series-low 224 number. But with the most nuclear player left in the playoffs a question mark, it might not be low enough.

For two teams with multiple dangerous scoring threats, the Hawks and Bucks are fairly deliberate with their attacks. Game 3's 93 pace rating puts the matchup on par with the slowest teams in the playoffs, following a Game 1 feeling-out where Young had a historic detonation and forced Milwaukee's hand, and a Game 2 that was over by halftime and didn't even give Milwaukee a chance to have its hand forced.

A hobbled Young would mean even less instant offense for the Hawks, and more milking the clock to create looks. And Atlanta will generally just look to wear teams down rather than outscore them, despite its depth on offense. The Hawks were one of the regular season's best Under bets before books started trimming their totals, and in the playoffs, they're 11-4 to the Under.

Meanwhile, the Bucks, who were the highest-scoring team in the NBA during the regular season, are 4-9-1 O/U in the playoffs, somehow hitting the Over just once in their seven-game series with the Nets. Their renewed focus on D is for real and makes us want to bank on the Under hitting again here.

Bobby Portis has been a consistent bright spot for Milwaukee in this series, providing an instant bench sparkplug.

After being largely absent from the Nets series, Portis has come alive against the Hawks, dropping double-digits in two of three games, averaging 11.3 ppg on 54.6 percent from the field in just 16.7 minutes per game.

He also averaged double-digits against the Heat in the first round, and can continue to slip through the cracks while ATL's efforts are focused elsewhere on D.

At a not-at-all-juicy 8.5, his total points prop is an insta-bet. 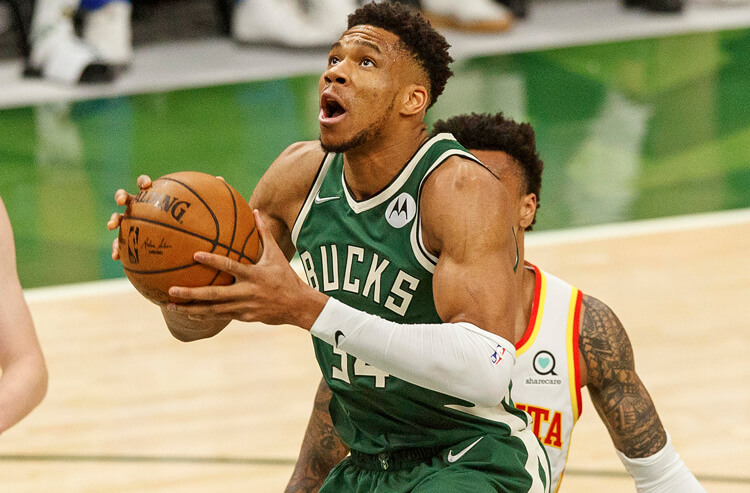