The Toronto Raptors return to their makeshift home in Tampa, Florida for just the second time in the past 11 games when they host the Philadelphia 76ers Sunday.

Toronto, which is coming off of three straight road wins, is a 2.5-point NBA betting underdog inside Amalie Arena with point guard Kyle Lowry ruled out of the lineup with a thumb injury. The Sixers have won two straight at home, snapping a three-game losing skid with all three contests coming on the road.

These are our NBA free picks and predictions for 76ers vs. Raptors on February 21.

Philadelphia is 5-2 ATS in the last seven meetings with Toronto. Find more NBA betting trends for 76ers vs. Raptors.

Are the Raptors ever truly playing at home? After being forced to call Florida "home", due to the pandemic keeping them from crossing the border, Toronto just hasn’t been able to get settled in Amalie Arena. The team is 6-6 SU and 4-8 ATS in its adopted venue, scoring only 109.8 points on less than 44 percent shooting—compared to 115.4 points per game on the road.

That limited offense could take a big step back Sunday with captain Kyle Lowry out with a thumb injury. Lowry, who’s averaging almost 18 points, 6.4 assists, and 5.4 rebounds, was injured in the win over Milwaukee on February 18 and sat out Friday’s win at Minnesota, in which the Raptors took an ugly 86-81 victory, shooting a measly 33 percent from the field and turning the ball over 15 times.

On the other side of the court, Philadelphia is getting bodies back for Sunday’s showdown with its Atlantic Division rivals. Guards Ben Simmons (illness) and Shake Milton (ankle) will return to the lineup, with the pair combining for 29.2 points per game for Philly.

Lowry’s efforts will not only be missed on offense but also defending the 76ers’ deep backcourt. The Sixers have a very capable cast around 7-footer Joel Embiid, including small forward Tobias Harris and sharp-shooting guard Seth Curry. There are just too many options for Philadelphia to lean on—and we haven’t even gotten to Embiid’s fantastic February yet.

Toronto must pick its poison versus Philadelphia and perhaps the less lethal option is to continue to clamp down inside and make the Sixers’ shooters do the damage. The Raptors are one of the best interior defenses in the NBA, allowing only 40.9 points in the paint (second lowest) and have limited opposing centers to an average of 19.6 points per contest (11th).

That said, Embiid is no ordinary center. And February has been no ordinary month for the 76ers’ big man. Embiid is averaging 35 points on 55 percent shooting this month and is fresh off a 50-point effort in the Sixers win over Chicago on Friday.

Philadelphia runs a very efficient offense (48 percent shooting on the season) but that percentage does dip away from home. The Sixers put up only 111.1 points per road game on the season (6.8 points less than in Philly) and Toronto will crowd the key and force the Sixers to knockdown looks from the perimeter, something the 76ers have struggled to do consistently.

Philadelphia, which already plays at a slower pace on the road – 100.93 (9th) vs. 102.65 (2nd) – will tick off a good chunk of the shot clock each possession as it dumps into Embiid, runs motion around him and relocates for an open look when the Raptors defense collapses.

These familiar foes played Under the total in their first meeting of the season back in December and have cashed in for Under bettors in four of their last six encounters (1-4-1 O/U).

Seth Curry has a soft spot for the Raptors going back to his dad’s time with the franchise and is pegged for a big game against Toronto (in Tampa) Sunday night.

Curry is the Sixers’ top 3-point threat, knocking down 46.5 percent of his looks and enjoying his best season as a pro. The son of Dell is averaging 13 points per game and has had the hot hand at times this month, with efforts of 22 and 25 points in February.

With the Raps sucked into the paint to slow down Embiid, and the Sixers returning other offensive threats, Curry could find plenty of open air in Amalie Arena. He scored 17 on Toronto back on December 29 (5 for 11 including 3 for 6 from the 3-point arc) and we like him to top his points total Sunday. 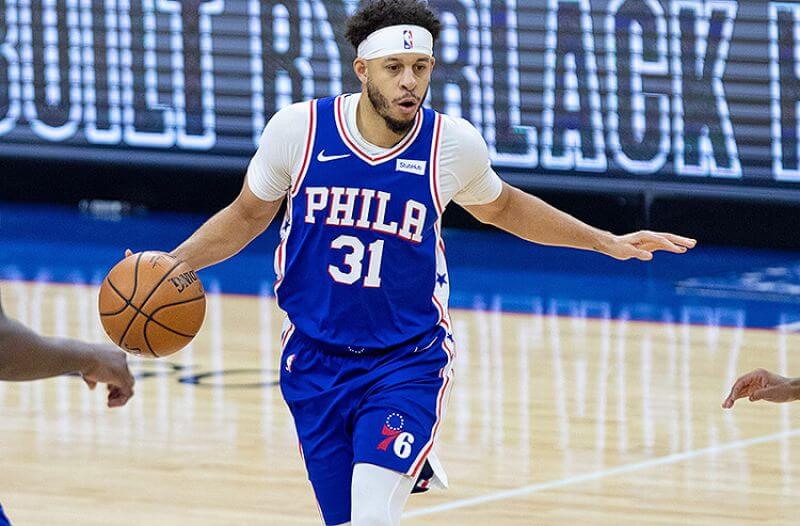