76ers vs Hawks Game 4 Picks and Predictions: Philly Continues Domination of the ATL

After a brutal first half by Philly in Game 1, the 76ers vs. Hawks series has been dominated by the No. 1 seed. Atlanta is reaching for straws for how to defend, but our picks and predictions have a firm grasp of how this one will play out tonight.

The Philadelphia 76ers are imposing their will on the Atlanta Hawks and can put their Eastern Conference semifinal opponents on the ropes with another win in Game 4.

The Sixers hold a 2-1 series lead and are 3.5-point road NBA betting favorites Monday, coming off a comfortable 127-111 victory in Atlanta on Friday. The Hawks have been able to hold their own at home throughout the season but Philly’s size and defense are dominating Atlanta over the past two and a half games.

Check out our free NBA picks and predictions for 76ers vs. Hawks on June 14.

TwinSpires Sportsbook opened Philadelphia as 3-point chalk, spent a little time at -3.5, then went back to -3, where the number stands at 4:30 p.m. ET. But bettors are on the 76ers, to the tune of 77 percent of spread tickets and 83 percent of spread money. "Liability is piling up on the Sixers. We'll be big Hawks fans tonight," TwinSpires trading analyst Zachary Lucas said. The total is up a tick from 225 to 225.5, with 66 percent of tickets/72 percent of cash on the Over.

Ever since scoring 74 points in the first half of Game 1, the Hawks have been fighting for their lives against the 76ers. Philadelphia nearly completed the comeback in the series opener, losing by four, and have ridden that momentum to a pair of 16-point victories.

The interior dominance of Joel Embiid is the anchor of this attack, allowing Philadelphia to average nearly 59 points per game in the paint and shoot 67 percent from inside eight feet of the basket. Atlanta has no answer for the Sixers’ sensational center and double-teaming Embiid just backfires as Philly’s other weapons expose the extra space.

With the Sixers boasting an offensive rating of 123.0 in this conference semifinal and shooting an effective field goal percentage of 61.7, the Hawks have been sucked into quicksand, with Game 3 bogged down in a pace rating of 97.0. Any speed advantage a smaller Atlanta lineup would have is being neutralized, left to inbound the ball on most offensive possessions and battle the bigger 76ers in a halfcourt set.

The Hawks’ best chance of beating the 76ers — or at least being competitive in Game 4 — is to trade 2-pointers for 3-pointers with Philadelphia. Atlanta did just that in the first half of Game 1, in which it made 13 of 23 looks from beyond the arc. However, the Sixers’ elite defense (ninth in 3-point defending) and lengthy defenders have turned off the 3-point tap, leaving ATL to hit just 24 total triples in the past two and a half games (24 for 77).

Nate McMillan seems to be grasping for straws at this point. The only hope for Atlanta is Embiid’s wonky knee, but he’s fighting through that discomfort and still scoring more than 35 points a night at less than 100 percent. Game 4 allotted the big man two full days off, so expect some added spring in his step Monday.

McMillan tinkered with the smaller lineup in the second half of Game 3 and could look to roll out another offensive-minded rotation in Game 4, in order to put the Sixers on their heels and knock down more 3-pointers.

Danilo Gallinari could be the key to kickstarting this offense. While the forward stands 6-foot-10, he’s definitely not a traditional big. But his length does allow him to shoot over the Sixers’ taller defenders — something Atlanta has struggled with in this series. Gallinari was 5 for 9 from outside in Game 2 but a painful 0 for 4 from distance on Friday.

As for Philadelphia, it continues to score at will in this series. Embiid is the catalyst but Ben Simmons and Tobias Harris have abused the Hawks smaller guards inside. Atlanta will need to throw multiple bodies at Embiid and try to plug up the paint as much as it can, gift wrapping clean air on the perimeter to a Sixers team shooting 39.2 percent from beyond the arc in the series.

Philadelphia is making just over 11 triples per game on 28 attempts heading into Game 4. Expect to see more long-range looks, as Atlanta picks its poison in an attempt to stop the bleeding in the key.

Seth Curry is providing solid backcourt support in this series, giving Philadelphia some of its rare 3-point pop versus the Hawks.

The other Son of Dell is shooting 12 for 20 from beyond the arc and while he was just 2 for 5 from deep in Game 3, he made five triples in each of the previous two games. So far in the NBA Playoffs, Curry has made fewer than three 3-pointers in just two of his eight postseason appearances.

With the Hawks defense throwing everything they can inside, expect Curry to see plenty of room to set up shop and drop three or more buckets from deep in Game 4. 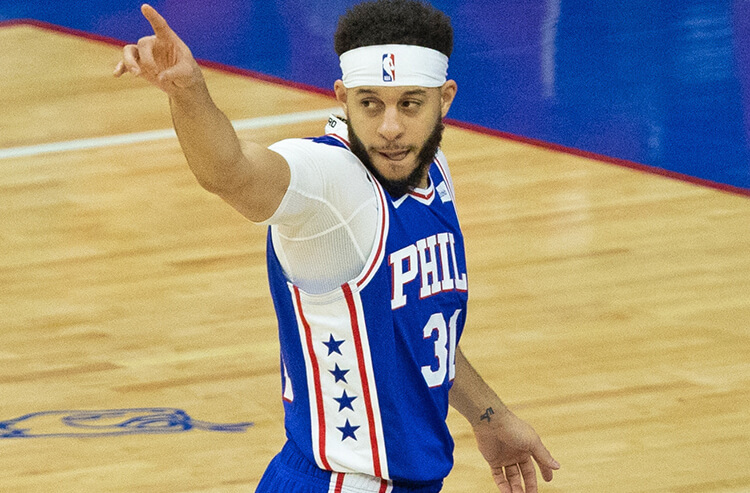 76ers vs Hawks Game 4 Picks and Predictions: Philly Continues Domination of the ATL
Provided by