After dominating the first two games, the Utah Jazz got punched in the mouth in a 26-point road loss to the Clippers in Game 3. Oddsmakers have jumped on board with Los Angeles, but are the best bets for this game with the home side?

After taking a one-two punch in the opening two games of their Western Conference semifinal series, the Los Angeles Clippers landed a blunt counter shot on the Utah Jazz in Game 3, leaving their foes staggering into Game 4 on Monday.

Los Angeles played one of its best all-around games of the year in a 132-106 beatdown of Utah and that’s convinced books and bettors that L.A. is the team to beat — and bet — in Game 4. The Clippers opened as low as 4-point NBA betting favorites and are now as high as -5.5.

Here are out free NBA picks and predictions for Jazz vs. Clippers on June 14.

The Under is 7-2 in Jazz’s last nine games following a loss. Find more NBA betting trends for Jazz vs. Clippers.

After cruising past Memphis and handling the Clippers at home in the first two games of this series, the Jazz finally got punched in the mouth in Game 3 and didn’t respond well. Los Angeles set the tone for the contest early on with in-your-shorts defense and leaned on a smaller and more athletic lineup to throw a wrench in Utah’s vaunted pick-and-roll attack.

That frenzied pressure also forced the Jazz to barf the ball up 13 times, which L.A. quickly cashed in for 24 points off turnovers. Those easy buckets are backbreakers when you’re facing an offense that features Kawhi Leonard and Paul George, who combined for 65 points in the home victory on Saturday.

The quick fix for Utah would be getting Mike Conley Sr. (who is out tonight) back from a hamstring injury but even if the veteran guard does return this series, he’s not going to be ready to play at this pace. The Jazz will, however, be ready for Los Angeles’ ramped-up intensity after getting caught flat-footed in Game 3.

The Clippers have had all the consistency of a game of Plinko: you never know what you’re going to get game to game. They followed up a fantastic Game 7 winner over Dallas with a dud in the series opener versus Utah and it would be a reach to say they repeat their offensive effort of Game 3, in which they shot 56 percent from the field and connected on 19 of 36 triples.

The Jazz are much too good a defensive club to allow that to happen again. What’s more, they’re a consistently good defensive club. The 132 points allowed in Game 3 was the single most points given up in a game by Utah this entire season. Just cleaning up the turnovers will help the Jazz bounce back from a rare shoddy night on the defensive end. And not to take anything away from L.A. after that effort, but I find it easier to trust Utah than the Clippers, especially with this spread ticking up as high as Los Angeles -5.5.

I believe the Clippers have a good chance of winning this one at home, but the final score will land inside the point spread for Game 4. If you’re riding with me on the visitor Monday, get as many points as you can with the Jazz.

The Over has hit in the past two games of this series with plenty of headroom, despite the teams playing a methodical tempo of 96.25.

Utah will adjust to the defensive pressure put on it in Game 4 and make the Clippers work for it on that end with ball movement and more active cutting. Despite a more physical style of play in Game 3, these teams were whistled just 40 combined times in L.A. compared to foul totals of 48 in each of the previous two games in Utah.

At this point in the series, there’s a surplus of tape and most major adjustments have been made. Now, it’s simply about execution. The Jazz and Clippers rank No. 1 and No. 2, respectively, in defensive assists per field goal made, which means they pressure opponents to play outside of their offensive sets.

With both teams digging deep into the info-rich scouting reports and the refs perhaps putting away the whistles, Game 4 will be a grinder between two very solid defensive clubs.

Slow starts have been a burden for the Jazz in this series, averaging only 23.7 points in the opening frame versus Los Angeles.

Utah is shooting just under 38 percent from the field in those first quarters with a pace rating of 94.67 in the initial 12 minutes of action.

This isn’t normal production for the Jazz, who owned an offensive rating of 116.8 in first quarters during the season and leaned on fast starts versus Memphis in the opening round of the NBA Playoffs, averaging 35 points per first quarter.

Donovan Mitchell was the motor behind those strong starts in the conference quarterfinals and without Conley on the floor, he has to set the tone for this attack right out of the gate. Utah averages 29.4 points per opening quarter on the year and its adjustments to the Clips’ pressure will get the Jazz past this 1Q team total on Monday night. 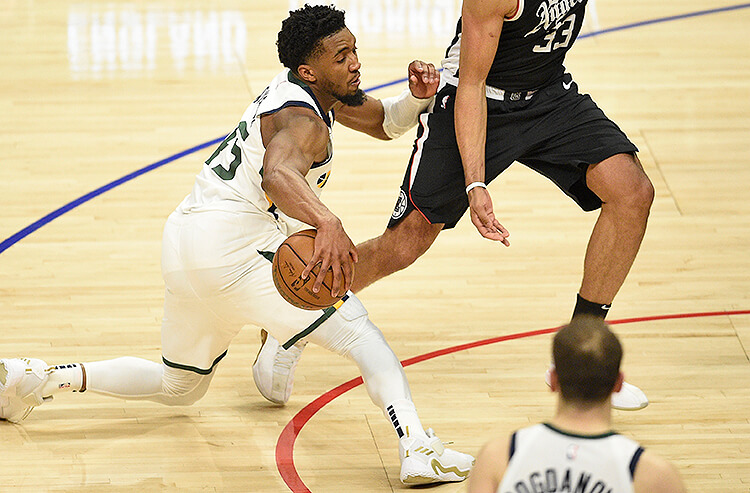 Jazz vs Clippers Game 4 Picks and Predictions: Clippers Inconsistency Makes Them Hard to Trust
Provided by