While L.A.'s been struggling to deliver on their scoring opportunities, Portland's been a complete mess this season, especially on the road. Find out why we can't back them to break the Galaxy's stride in our MLS betting picks.

As they look to improve on the worst start in club history, the Portland Timbers resume play following the international break with a visit to the LA Galaxy on Saturday afternoon. Losers of three straight in MLS play, the Timbers have just one victory in their last eight matches, while the Galaxy had one of their best performances of the season prior to the break.

In a series that has seen plenty of exciting matches in the past, both teams have struggled at the offensive end this season and will hope to reverse that trend this weekend. Can Portland get just their second away win of the season? Find out in our LA Galaxy vs Portland Timbers MLS picks and predictions for Saturday, June 18.

It will be California sunshine for all to enjoy on Saturday afternoon, with zero clouds and temperatures in the low 80s. There is no chance of precipitation, with a slight breeze that should not have much impact on proceedings.

After a rough spell where they seemingly couldn’t score at all, the Galaxy exploded for seven goals over two matches just before the international break. After a 3-1 win over LAFC to knock their rivals out of the US Open Cup, they dismantled Austin FC 4-1 with a dominant second half.

Forward Dejan Joveljic made MLS history, becoming the first substitute to contribute to four goals as he scored twice and set up two more in just 33 minutes. The scoring outburst saw them score nearly as many goals as they had in their first six home matches combined.

The Galaxy’s goal-scoring woes haven’t been for a lack of chances. They’ve accounted for the most shot-creating actions per 90 minutes of any team in the league, but have also underperformed their expected goals total by the widest margin of any team. They’ve managed just 16 goals versus having an expected return of 22.7 goals. The chances should continue to come for Chicharito and company, as they rank fifth in the league in touches in the opposing team’s penalty area.

The Timbers have dealt with injuries all season, and are getting close to having many of their players back. Whether it’ll be enough to turn around a disappointing season remains to be seen. Taking just 15 points through their first 15 matches, the Timbers are off to the worst start in club history.

Making matters worse, they’ve taken just six points from their last eight fixtures, winning just once in that span, and aside from their 7-2 mauling of Sporting KC, they’ve scored just four goals in that time.

That lone win was a 3-2 victory at Vancouver — their only road victory this season — and in their eight away matches, the Timbers have managed just nine goals. They’ve failed to score in two of those outings and have conceded seven first-half goals to put themselves in bad positions early. Overall, they’ve conceded multiple goals in each of their last four matches.

The Galaxy have conceded the fifth-fewest shot-creating actions per 90 minutes in the league, which is bad news for a Portland squad that are struggling to score this season. In fact, Portland has outperformed their expected goals. At the other end, they’ve kept just one clean sheet, and have conceded the fourth-most goals in the Western Conference.

To make matters worse, the Galaxy will face a Portland defense that has given up the fifth-most shot-creating actions per 90 minutes in the league, and that has conceded multiple goals in each of their last four matches.

With the home side having seemingly discovered a formation and setup that allows them to create higher-quality opportunities, and the visitors struggling at each end, the result of this match doesn’t seem to be in much doubt. Take the Galaxy to win at home for the fifth straight time in the series.

While the Galaxy should have plenty of chances, I don’t see them scoring a ton of goals. Teams tend to be a bit sluggish coming back from international breaks, and despite their form before going on hiatus, they’ve yet to show they can consistently finish off chances. In addition, they’ve started off slowly at home this season, scoring just twice before halftime in seven home fixtures.

Portland cannot be expected to contribute much to the match total, given their struggles at the offensive end, and the Galaxy will likely play a bit more cautiously to prevent them from getting out on the break. It’s not a strong play, but if you want to play the match total, I suggest taking the alternate line and betting that there won’t be more than three goals, a total that has been eclipsed in just two of Portland’s home matches this year.

Prediction: Under 3 Asian total (-120 at DraftKings)

While the majority of matches in the league this season have seen both teams find the scoresheet, the Galaxy have bucked that trend. Eight of their first 14 matches have seen at least one side fail to find the back of the net, and in four of those the Galaxy kept a clean sheet. That trend continues at home, where four of their seven matches this season at Dignity Health Sports Park have seen one side fail to score.

Given the Galaxy should win this match, I love the price on them winning to nil. As we’ve already discussed, the Timbers are in a matchup that bodes poorly for their scoring chances, while the Galaxy finally seem to be finding their footing. With Portland missing the services of Jaroslaw Niezgoda, their second-leading scorer, it’s even less likely they find the back of the net. 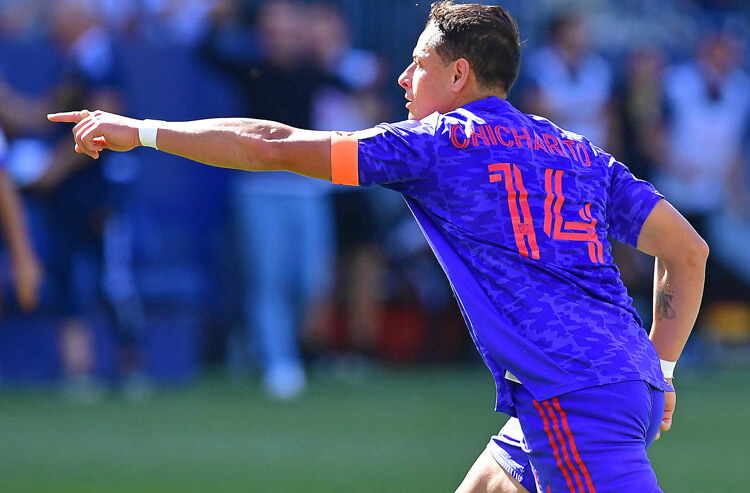 LA Galaxy vs Portland Timbers Picks and Predictions: Timbers Continue to Fall on Road
Provided by