Atlanta United have been rock-solid at home, while Inter Miami have been dreadful on the road. We're fading current form and relying on these two to show their true colors on Sunday as United continues crushing in ATL.

Both sides are in desperate need of all three points as Atlanta United FC host Inter Miami CF on Sunday in Major League Soccer action.

Atlanta is three points adrift of the seventh and final Eastern Conference playoff spot, while Inter Miami is just a point behind Charlotte FC, the club holding onto that final postseason berth.

Get the best MLS betting angles with our Atlanta United FC vs. Inter Miami Cf picks and predictions for Sunday, June 18.

Sunday should be clear and sunny in Atlanta with temperatues in the high 80s and a slight breeze around 10 mph with no chance of rain.

Inter Miami, who are unbeaten in four MLS matches, has the definite form advantage for their trip to Atlanta. However, Inter Miami’s inability to manufacture a complete 90-minute performance on hostile terrain has prevented them from climbing the Eastern Conference table.

Inter Miami are tied with two other teams (DC United and Atlanta) for the third-worst Eastern Conference road record, amassing just four points (one win and one draw) from a possible 18. Their only away win came in Seattle on April 16 against a middling Sounders side.

That woeful record dates back further than the current campaign, with Inter Miami losing nine of the last 12 on the road. Phil Neville’s side managed a single point, a 0-0 stalemate in Philadelphia, in their last away fixture. It was the only the second time this season his side kept a clean sheet on their travels, a silver lining Neville will try use as a way to galvanize his troops.

While Atlanta enters the match in dreadful form, they have their fifth-best home record to fall back on. In stark contrast to their opposition’s road woes, Atlanta was undefeated at Mercedes-Benz Stadium in 13 matches prior to the 2-1 home defeat against Columbus Crew last time out.

Columbus, who put an abrupt end to Atlanta’s home run of eight wins and five draws, also happened to be the last victors at Mercedes-Benz Stadium, a 1-0 win on July 24, 2021.

While Atlanta’s recent tough run combined with Inter Miami’s four-match unbeaten streak might plant a seed of doubt, the Five Stripes are too formidable on home turf to let this opportunity slip.

Neville’s dismal away record as Inter Miami boss will suffer another setback on Sunday in what should be another tight, nip-and-tuck MLS away defeat.

The last five matches at Mercedes-Benz Stadium, including Atlanta’s recent 3-2 friendly victory over Pachuca, saw three or more total goals, all resulting in the Over. Dating further back, three of the previous four matches also struck the Over.

In strikingly opposite fashion, Inter Miami’s last six road matches in all competitions have seen less than three goals, all resulting in the Under. Something obviously has to give when the teams collide on Sunday.

Inter Miami’s chances of pulling off the upset are predicated entirely on it being a low-scoring affair. Conceding even two goals will almost assuredly result in another away defeat. Atlanta is too prolific offensively on home soil and won’t be denied by one of the conference’s worst away outfits.

Atlanta has scored two or more goals in four of their last five home matches. The anomaly came in a 2-1 defeat to Columbus Crew, the only team to defeat Pineda’s side at Mercedes-Benz Stadium in almost a year.

Inter Miami not only struggles to muster points on enemy terrain, they have difficulty finding the back of the net. Neville’s side have scored just three goals in their last six away matches in all competitions.

However, Atlanta are susceptible defensively, even at home. They’ve conceded seven in their last four home matches, even allowing a goal against the lowly Chicago Fire.

Look for Inter Miami to score a consolation goal in yet another away defeat.

Pick: Atlanta to win and both teams to score (+200 at BetMGM) 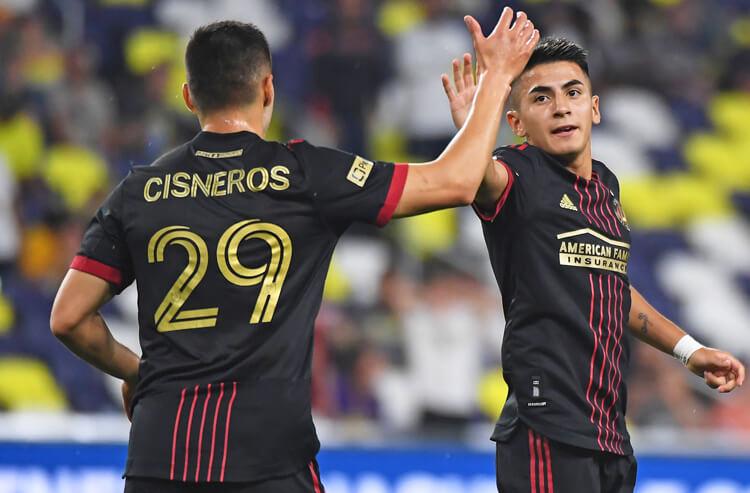