Yankees vs Blue Jays Picks and Predictions: Gerrit Cole At Near-Pick 'Em Odds Is Too Good To Pass Up

The Yankees try to draw closer to a postseason berth with ace Gerrit Cole on the mound tonight against the Blue Jays. MLB betting odds aren't giving the Cy Young hopeful much respect, however, as NY's ML price is low — and we're taking advantage.

The Toronto Blue Jays and New York Yankees will play the second game of a pivotal three-game series Wednesday as the visitors will send Gerrit Cole to the mound after a massive 7-2 victory — their seventh in a row — in the opener last night. The Jays will counter with Jose Berrios in a near must-win game.

New York opened as a -112 MLB betting favorite after closing last night at +110. The total opened at 8.5 with a few books moving to the 8.

Here are our free MLB picks and predictions for Yankees vs. Blue Jays for Wednesday, September 29, with first pitch set for 7:07 p.m. ET.

Gerrit Cole (16-8, 3.08 ERA): Gerrit Cole will get one more kick at the can to win the AL Cy Young versus a Blue Jays team that he’s seen four times this year — and has a 2-1 record with a 2.79 ERA and a 1.00 WHIP. The Jays are hitting just .202 off of the New York right-hander over 23 innings this season but unfortunately for the Pinstripes, Cole has pitched to a 4.61 ERA over the last month and has allowed 10 runs over his last 10 2-3 innings. He lasted just 3 2-3 innings in his last start against the Jays back on September 9 and exited early due to a hamstring injury.

Jose Berrios (12-9, 3.48 ERA): Since joining the Jays, the former Minnesota starter is 5-4 in 11 starts with a 3.50 ERA. He is coming off a dominating 10-K outing against the Twins, which was his third double-digit strikeout game with Toronto. Berrios faced the Yankees in the Bronx at the beginning of the month and walked away with the victory after spinning 6 2-3 of two-run baseball with eight punchouts, as the righty has not allowed more than three earned runs in six straight starts.

The Yankees are 7-0 in their last seven games. Find more MLB betting trends for Yankees vs. Blue Jays.

Giancarlo Stanton hit a three-run bomb last night to blow open what was a Yankees 3-2 lead after six innings and it was more than enough offense for New York — the Jays’ offense looked cold and managed just three hits against a total of six New York pitchers. Outside of Bo Bichette’s two hits, only Corey Dickerson managed to secure a hit, as the two runs Toronto scored were manufactured on the base paths.

Things will get infinitely more difficult for the home team, who now finds itself behind both the Red Sox and the Mariners for the final Wild Card spot and have to face Yankees ace Gerrit Cole tonight. Cole’s numbers look rough coming into Wednesday’s game — 14 runs allowed in his last 20+ innings — but that includes one terrible outing versus Cleveland and a game he had to pull himself (hamstring) against Toronto, finishing with 3 2-3 innings pitched and three runs on five hits. In five of his last eight starts, he’s yielded one or fewer runs.

Cole will face a Toronto lineup that isn’t coming into the series with much confidence at the plate, having been held to two or fewer runs in four of its last six games and also now has dropped four straight home games to the Yanks. Marcus Semien, Bo Bichette and Lourdes Gurriel all have sub-.155 batting averages against Cole in over a dozen at-bats each.

If this lineup struggled to hit Jameson Taillon (who was fresh off the 10-day IL) and long reliever Michael King, Cole could be a nightmare.

The best case for the Jays on the moneyline is that starter Jose Berrios throwing a gem. Berrios has been consistent since coming over from Minnesota 11 starts ago but he hasn’t been elite. Berrios hasn’t recorded a sub-3.00 ERA in any month this year and he’s given up three or more runs in three of his last five. He’s been very good, but Toronto needs him to be untouchable, which might be tough to do considering he has allowed a homer in five straight starts — plus Stanton and Aaron Judge have been having a flair for the long ball of late.

Most of the important arms will be available in the bullpen tonight. That also gives the advantage to the Yankees, who have the fourth-best bullpen ERA in the American League in the second half. Aroldis Chapman is back to his old self and hasn’t allowed an earned run in seven of his last eight appearances.

Sorry Toronto fans, but this is one of the best prices that we have seen on Cole all year and New York knows how to put winning streaks together.

Yesterday’s starters, Hyun-Jin Ryu and Taillon, were both coming off the 10-day IL and the total closed at 9 after opening at 9.5. The total would end up pushing with the 7-2 final, but it was a sweaty night for Over backers.

Now, we get arguably the best pitching matchup of the series... and books are giving us 8.5 at opening? No wonder it is already close to being bet down to 8.0.

For starters, Cole gets his personal catcher in Kyle Higashioka, who is better defensively than Gary Sanchez (not a difficult task) but also hits like an NL pitcher. His insertion to the lineup gives the Yankees a weak bottom-three with Brett Gardner, Gio Urshela, and Higashioka. Add in DJ LeMahieu’s inability to get extra-base hits and Berrios has a solid part of the lineup that he needs to get out before seeing the big sticks. Berrios did handle this lineup back on September 9, going 6 2-3 innings and allowing just two runs on five hits.

The Jays’ offense could look different tonight, too. Lourdes Gurriel (stitches in finger) may hit the pine after looking like he was waving a wet newspaper at the ball last night and with Berrios pitching, Danny Jansen or Reese McGuire will have to catch. If Alejandro Kirk wants into the lineup, he’ll likely have to DH.

The Jays were forced to manufacture runs yesterday as the sticks weren’t there and still managed to run into a key out. This isn’t the best base-running team in baseball.

We're hoping everyone has plenty of outs and can find this 8.5 before it hits 8.0 across the board, because we love this Under. 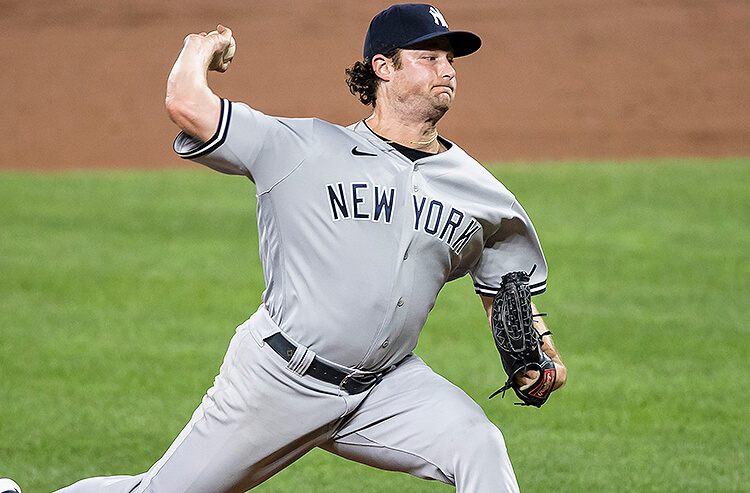 Yankees vs Blue Jays Picks and Predictions: Gerrit Cole At Near-Pick 'Em Odds Is Too Good To Pass Up
Provided by