Phillies vs Braves Picks and Predictions: Land of the Fried, Home of the Braves

Atlanta and Philly are locked into an intense playoff-like series that could swing the NL East. With all eyes on Truist Park, get our Phillies vs Braves picks for your best value on one of the biggest games of the year.

The NL East has been one of the more exciting divisions in baseball. It’s not because there are a couple of insane teams winning 100 games apiece, it’s because of how tight the division has been all season long.

Tonight, we’ll be watching the most important game in the NL East to date, between the Philadelphia Phillies and the Atlanta Braves at Truist Park in Atlanta, at 7:20 p.m. ET.

Read our best free Braves vs Phillies picks and predictions for September 29.

Aaron Nola (9-8, 4.64 ERA): It’s been a down year for Nola. On the season, he has a 4.64 ERA and hasn’t been pitching long outings for Philadelphia for most of the season. Nola hasn’t thrown 100 pitches or more in eight of his last nine starts. With a terrible bullpen, the Phillies could use Nola to go deeper in games. But he’s been a bit unlucky this year and has actually pitched better than his basic stats indicate.

Max Fried (13-7, 3.12 ERA): Max Fried is coming off an incredible start, throwing nine innings of shutout baseball, on the road, against the Padres. He only struck out four batters in that game but induced 18 ground balls and allowed no walks. Fried continues to throw quality starts and gives the Braves chances to win every single time he’s out there pitching.

Braves are 8-0 in their last eight games vs. a right-handed starter. Find more MLB betting trends for Phillies vs. Braves.

The Atlanta Braves continue to smack around right-handed pitching with eight straight wins against righties. However, with the Phillies sending out Aaron Nola, the Braves will be tested.

Nola has a 2.99 xFIP in the last 30 days with 34.9 percent strikeouts and 3.7 percent walks. He’s been a bit unlucky when it comes to batting average of balls in play, with a .361, but is inducing over 45 percent of ground balls and limiting line drives to just 12.1 percent.

As a right-handed pitcher, Nola has struggled mostly against right-handed batters. In his last 50 plate appearances, Nola is allowing a .415 wOBA and an ISO of .196. He’s allowing more hard contact to righties and walking six percent of righties in the last 30 days.

The Braves' projected lineup is hitting an ISO of .235 with a wOBA of .339. However, Atlanta is striking out 23 percent of the time and walking just 6.4 percent of the time. They’ve been an aggressive offense, hitting 21.3 percent line drives and just 37.7 percent ground balls in the last 30 days against righties.

On the other hand, Max Fried will take the hill for the Braves. The left-hander has an xFIP of 3.35 with a strikeout rate of just 24.5 percent and a walk rate of just under six percent.

Fried has been able to induce 60 percent of ground balls in the last 30 days and has a batting average of balls in play of .194. He’s been the opposite of Nola, when it comes to luck. However, the higher amount of ground balls has helped his case.

Oddly enough, Fried has struggled more against lefties, allowing a .366 wOBA and ISO of .344 to his last 35 lefties faced. This is good news for potential MVP candidate Bryce Harper, who has a .372 wOBA against lefties with 20 percent walks.

The Phillies will more than likely bat six righties and just two lefties. Fried has shut down righties this season.

Therefore, I’ll side with a consistent arm in Max Fried over Aaron Nola, who has been much shakier. The Braves lineup profiles much better against Nola, at least in the last 30 days.

I’m not expecting much offense in this game, especially early. Both pitchers have xFIP’s way below four and are able to induce ground balls at a high enough rate while limiting line drives.

Fried has a 5.40 ERA against the Phillies in two starts this season, which is a bit concerning, but these types of games just have a different feel to them from the get-go. The pressure is on and usually that will hurt the hitter more than the pitcher.

Both pitchers have a high number of strikeouts and low amount of walks against the opposition.

Let’s take the Under in the first five innings between both teams at 4.5. This is basically a playoff game and a playoff series for both teams. 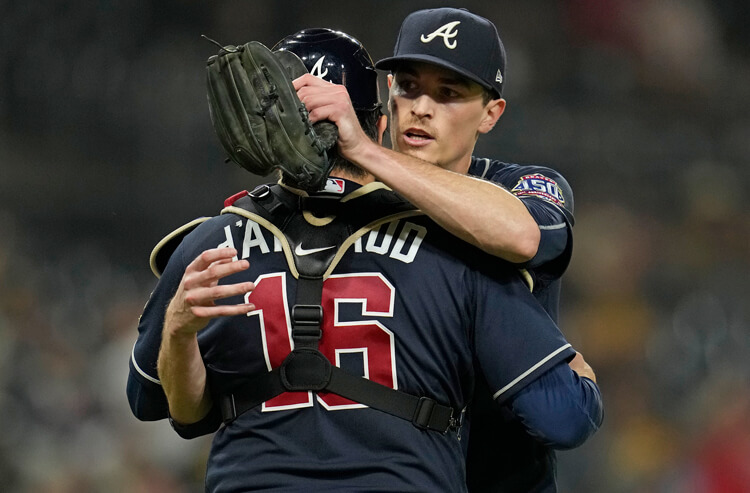 Phillies vs Braves Picks and Predictions: Land of the Fried, Home of the Braves
Provided by