As we get set for the MLB playoffs, there are still plenty of crucial games and great prop value down the regular-season stretch run. Join us on our daily tour around the majors for our best MLB prop picks.

We are coming down the home stretch of the MLB season and the American League wild-card postseason race could not be tighter with five teams still fighting for two spots.

The most important matchup in this race happens in Toronto tonight, where the Blue Jays host the Yankees, and you know there's some prop betting value as Gerrit Cole toes the rubber against Jose Berrios. Then we break down a pair of total bases props for two of the hottest players in baseball.

We analyze and pick these games with our best free MLB prop bets and predictions for Wednesday, September 29.

The biggest series going on this week takes place in Toronto, where the Blue Jays and Yankees face off with massive American League wild-card implications on the line.

The Yankees took the opener of this series 7-2 thanks to Giancarlo Stanton and Aaron Judge staying red-hot and going deep last night. Now, the Yankees look to go up 2-0 in the series and put even more space between them and everyone trying to chase them down in the wild card race as they hand the ball to ace Gerrit Cole.

Cole bounced back after a tough start against Cleveland, limiting the Red Sox to three runs on five hits on the weekend. While Cole did not last long in his last start against the Blue Jays, he's still one of the best starters in the AL.

Cole leads the league in FIP and strikeout-to-walk ratio and is limiting opponents to a .215 batting average. Now, he faces a Jays team with a ton of pressure on their shoulders that looked bad at the plate last night.

Toronto counters with mid-season acquisition Jose Berrios, and the right-hander has been solid lately. Berrios owns a 2.70 ERA and is limiting opponents to a .190 batting average over his last nine starts. That includes holding the Yanks to two runs on five hits while striking out eight over 6 2-3 inning back on September 9.

If Berrios can cool off Stanton and Judge, this should be a low-scoring matchup through the first half of the game.

Jose Ramirez is closing the 2021 season with a bang. The Cleveland soon-to-be Guardians’ third baseman is locked in at the dish right now. Ramirez is hitting .408 with a 1.145 OPS over his last 15 games.

Next up for Ramirez, is the Kansas City Royals and starter Daniel Lynch. The Royals rookie left-hander has come back down to Earth after a hot start to his career. Yes, the month of September has been a rough one for Lynch, pitching to an 8.10 ERA and a 1.50 WHIP over four starts this month.

That includes his last start back on September 21 against this same Cleveland squad that got to him for four runs on four hits and three walks over six innings. That’s not an awful start, but Ramirez has been a problem from Lynch already in his young career, with the Cleveland third baseman going 2-4 with 2 walks against him this season.

With Ramirez hitting .293 against lefties on the season, bet on him to stay hot in this one.

Despite already notching 101 wins this season, the Los Angeles Dodgers still trail the San Francisco Giants by two games for the lead in the National League West. They’ll try to narrow that gap when they continue their series with the San Diego Padres tonight.

The Dodgers are massive favorites for this game because they hand the ball to the red-hot Max Scherzer. But Scherzer isn’t the only former Washington National that is getting hot at the right time.

Trea Turner has been killing it since donning Dodger Blue, but he has really turned it on lately. The Dodgers’ middle infielder is currently in the midst of a 14-game hitting streak, during which he's hitting .397 with a 1.134 OPS, including six multi-hit games in his last nine.

Turner goes up against the Padres’ Ryan Weathers, who is making his first start since August 28. Now, Weathers made several relief appearances since then for some solid results, but he has struggled much more in the starter’s role.

Weathers owns a 5.97 ERA and is allowing opponents to hit .292 in games he starts this season, and with Turner hitting .384 against left-handers for the year, he’s a good bet to go Over his total bases once again in this one. 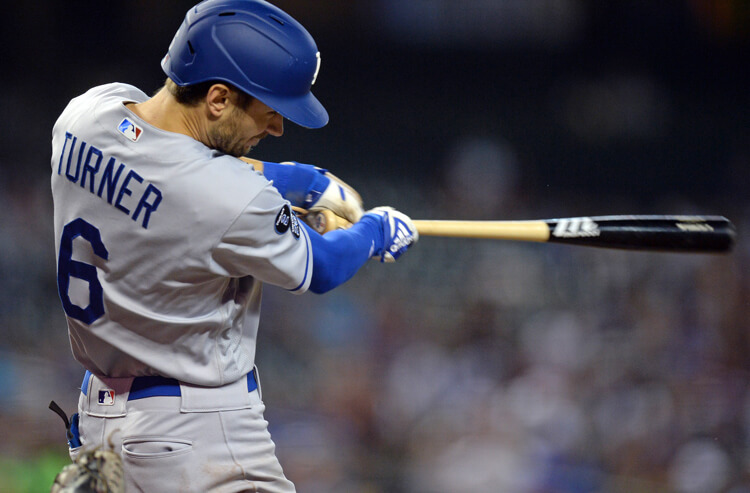