Oakland halted the Bombers' win streak, but it will be tough to shut the pinstripes down in back-to-back matchups. Our Yankees vs A's picks explain why this game might get away from the home side.

The Oakland Athletics snapped the New York Yankees’ 13-game winning streak yesterday in a 3-2 win and will look to split the series and gain some ground in the Wild Card race Sunday night in primetime.

It will be a get-away game for the A’s, who head to the East coast for a Tuesday series with the Tigers while the Yankees will stay in California and face the Angels Monday night.

Here are our free picks and predictions for New York Yankees vs Oakland Athletics for Sunday, August 29.

Jordan Montgomery (5-5, 3.69 ERA): The New York lefty has not taken a loss in five straight starts and has allowed more than one earned run just once over that stretch. He does struggle to get deep into games, but he has been keeping the ball in the park of late (three home runs allowed over his last six starts) and has been striking out nearly a batter per inning on the season.

His splits favor home slightly, but he owns an impressive 2.30 ERA over 30 second-half innings. The Yankees are 15-8 SU in Montgomery’s 23 starts this season.

Paul Blackburn (0-1, 4.09 ERA): The 27-year-old Blackburn has made two starts this year replacing Chris Bassett (IL) in the rotation. He’s faced the Mariners and White Sox in his two starts and has been decent — lasting five-plus innings in each turn and not allowing more than three earned runs in either start.

He is not a strikeout pitcher, with just 59 punchouts over his 110 MLB innings, but keeps the ball on the ground and pitches to contact, which works when you have one of the best defenses in baseball behind you.

Yankees: Miguel Andujar 3B (out), Gleyber Torres SS (out), Clint Frazier OF (out)
A's: Stephen Piscotty OF (out), Seth Brown OF (out), Ramon Laureano OF (out)
Find our latest MLB injury reports.

The Under is 6-0 in Montgomery’s last six road starts. Find more MLB betting trends for Yankees vs. A's.

No team has been hotter than the Yankees, who are 21-6 SU in the month of August and are 5.5 games up on the A’s in the Wild Card race. The scary thing about this team is that they're getting even healthier.

Aroldis Chapman’s struggles have been a major talking point this season, but he is back and healthy and has converted 24 of his 28 save opportunities this year. Gio Urshela is back after missing some time and strengthens up the left side of the infield that is already missing Gleyber Torres and hopefully won’t have to use Rougned Odor at the hot corner. Luke Voit also seems to be over his injuries, as he is slashing .471/.550/.941 over his last seven games. We haven’t even mentioned the first five batters in the order, yet.

Oakland starter Paul Blackburn will have to navigate the gauntlet New York lineup that throws D.J. LeMahieu, Anthony Rizzo, Aaron Judge, Giancarlo Stanton and Joey Gallo at you out of the gates. The average size of those five is 6-foot-5 and 247 pounds. That isn’t a batting lineup, that is a college offensive line. Stanton has launched a homer in four of his last five and Judge has homered in back-to-back games with a 1.366 OPS over his last 14 games. Blackburn isn’t a home run pitcher, but this is not a great matchup for a starter who has struggled to stay up with the big team.

Jordan Montgomery has given the Yankees some solid innings this year as the team has won all four of his most recent starts and is 15-8 SU when he does pitch. He’s seen Oakland once this year in a no-decision where he was still solid with just one run over 5 1-3 innings in a 2-1 New York win. Only nine of his 23 starts have gone at least six innings, but with the Yankees having the second-best bullpen in the A.L., it doesn't matter.

Oakland is 3-7 SU over their last 10 and are 4-11 SU since an eight-game winning streak in early August. New York has taken four of the six meetings this year and just seems to be on a different level than most teams in baseball right now.

The A’s bats haven’t been the problem this month with a 112 wRC+ that ranks fourth in baseball, but the starters are posting a 4.67 ERA this month with a .260 batting average against. The A’s could be trailing before they even get to their impressive bullpen.

New York can certainly start another heater Sunday night and we’d rather increase our wager and take the moneyline instead of +105 on the runline.

Over the Yankees’ 13-game winning streak, New York went 6-5-2 O/U. The offense has been hot, but it hasn’t led to profitable Over bets. On the season, New York is one of the better road Under teams with a 24-36 O/U mark. In fact, the Yankees have cashed the most Under tickets at 47-69 O/U.

Both teams feature elite bullpens that are in the Top 4 in baseball in the second half with ERA’s under 3.10. This is a very important note, as we doubt either starter will record 18 total outs, so the bullpens will be doing some heavy lifting. New York is off tomorrow, which means all arms should be available, while the A’s used the B-bullpen on Friday and needed just two innings of the A-bullpen last night.

Despite the boom of the NYY lineup, they aren’t the most fleet-footed ballplayers in the bigs. New York hits into nearly one double play per game, which is the highest mark in the American League. Since the retooling of the lineup, the Yankees have been swing-and-miss happy and have the second-most strikeouts in the A.L. this month. The bottom of the order also has some holes in it with Andrew Velazquez and Odor hitting at the bottom.

The A’s sit in 22nd in home runs hit in the second half and haven’t had great production out of Mark Canha (.233 BA) and Matt Chapman (.729 OPS). Catcher Yan Gomes hit out of the clean-up spot yesterday as the team managed just five hits and went 1 for 9 with RISP.

Many bettors will look at the NYY lineup and the starting pitchers and likely lean towards the Over here, but not us. We’re hitting the Under 9 which might actually hit 9.5 as it is currently shaded to the Over. 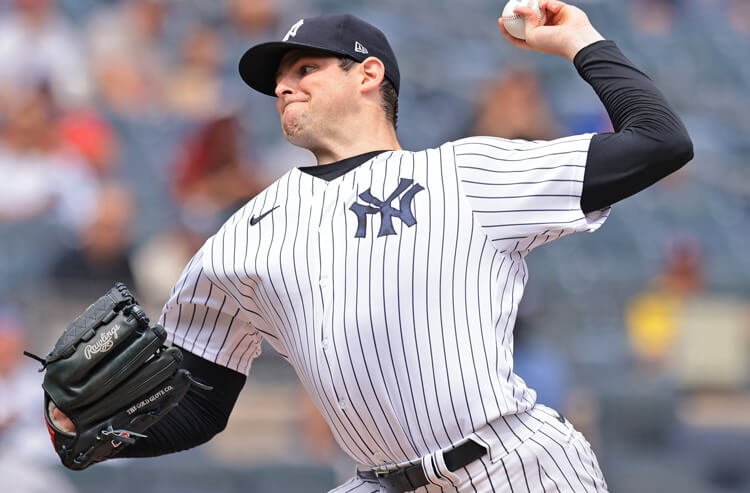