The red-hot Yankees go for their 13th win in a row behind ace Gerrit Cole, who is coming off back-to-back strong performances. Can Oakland, losers of five straight, get back on track as a home underdog? Find out in our Yankees vs. A's picks.

The surging New York Yankees will look to make it lucky No. 13 on Friday when they resume a crucial four-game series with the Oakland Athletics, who have dropped to 2.5 games back of the second wild-card spot in the American League.

New York coughed up a six-run lead in the series opener before prevailing 7-6 for their 12th straight win Thursday, handing the reeling A's their fifth consecutive loss. The Yanks hold a three-game lead over the Boston Red Sox in the wild-card standings and will have ace Gerrit Cole on the mound tonight as a road betting favorite.

Find out who we like in our free MLB picks and predictions for Yankees vs. A's on August 27.

Gerrit Cole (12-6, 2.92 ERA): Cole’s numbers this season would be good for almost any other starter in the league, but he hasn’t lived up to the absurdly high expectations that come with making the type of money he makes. His 2.92 ERA is the highest he’s had since his final season in Pittsburgh, and he has had quite a few lousy outings this year. Cole is, however, coming off back-to-back dominant performances, as he has given up just one run in his last 11 2-3 innings of work.

Sean Manaea (8-8, 3.77 ERA): Manaea hasn’t been himself lately, as the lefty has failed to make it to the sixth inning in each of his last four starts. The 29-year-old only gave up two runs against the San Francisco Giants on August 21, but he pitched just 4 2-3 innings in that one. At some point, Oakland is going to need him to start working deeper into games. Manaea did, however, strike out 11 batters in 5 1-3 innings of two-run ball against the Yankees back on June 20.

Yankees: Zack Britton RP (Out), Clint Frazier OF (Out), Miguel Andujar 3B (Out), Gleyber Torres SS (Out), Aaron Hicks OF (Out).
A's: Ramon Laureano OF (Out), Stephen Piscotty (OF (Out).
Find our latest MLB injury reports.

The Athletics are 17-8 in their last 25 game 2s of a series. Find more MLB betting trends for Yankees vs. A's.

With the Yankees being the hottest team in the league over the last month or so, this is as questionable a line as you’ll see all season. New York has been unbeatable for weeks and has its best pitcher on the hill, and the team also happens to go against a mediocre left-handed starter. This Yankees lineup is excellent against southpaws, making these odds seem too good to be true. In fact, New York seems like such a good bet that this actually feels like a trap.

While Cole is one of the best pitchers in the league, he has had most of his struggles on the road this year. The righty has a 2.39 ERA when pitching at Yankee Stadium, but that number goes up to 3.45 when he’s on the road. Also, the Athletics do have a few guys that can give him trouble in this game.

Matt Chapman is one of those players, as he is 4-for-18 with three doubles, a homer, and two RBIs against the righty. And while Matt Olson and Mitch Moreland are a combined 1-for-36 against Cole in their careers, don’t be surprised if both of them come through in this one. These guys hit righties way too well to continue struggling like that, making those numbers seem a bit fluky.

Manaea hasn’t been pitching particularly well lately, but the lefty has had success against this Yankees team. He was great against New York earlier in the season, and the team actually has only a .185 (16-for-70) combined average against him. Will he go and shut out the Yankees? Probably not. He’s capable of hanging with Cole when he’s on his game, however, and that’s probably part of the reason the oddsmakers are okay with so many people taking New York — it wouldn’t be all that surprising if this game had some of the most lopsided action of the year.

With the oddsmakers seemingly begging bettors to take the Yankees in this game, it feels like a game where the Athletics offense could come through and score a decent amount of runs.

Oakland put up six in a loss to New York on Thursday and the team has the type of sluggers that can get in Cole’s head in this game.

Manaea, meanwhile, isn’t going to blank the Yanks in this game. He might give up two or so runs over five innings, but he just hasn’t shown he’s capable of dominating anyone recently. That means New York will get its fair share of chances here, making this Over seem like the right play. 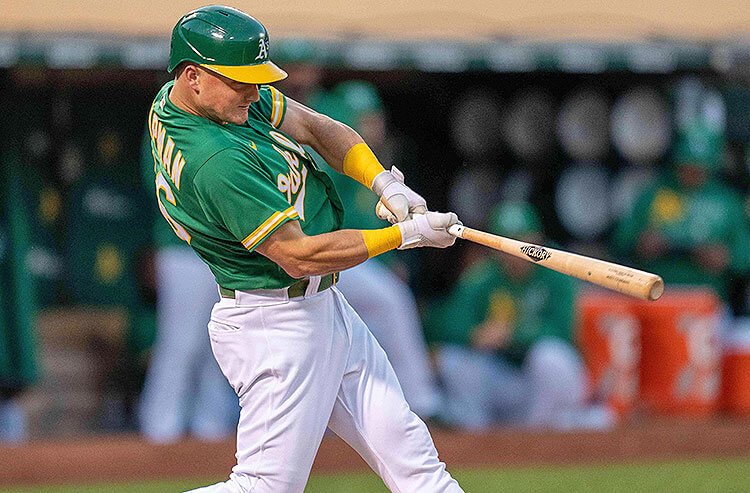 Yankees vs A's Picks and Predictions: Streak Busters
Provided by