Toronto's bats woke up Thursday in a 10-7 loss after scoring three or fewer runs in six straight and the club will have a good shot to stay hot vs. Detroit rookie Matt Manning (5.91 ERA). That's why we're taking Toronto -1.5 in our Jays vs. Tigers picks.

The Detroit Tigers and Toronto Blue Jays meet for the second time in a week when they collide at Comerica Park on Friday for the start of a three-game set.

Detroit, which was off Thursday, split a mini two-game series with the St. Louis Cardinals after taking two of three from Toronto, while the Blue Jays split a four-game set with the Chicago White Sox, dropping the finale 10-7. Toronto opened as a -142 betting favorite for the series opener behind lefty Steven Matz and money has been coming in on the Jays, moving the line to as high as -165.

Find out who we like in our free MLB picks and predictions for Blue Jays vs. Tigers on August 26.

Steven Matz (10-7, 3.94 ERA): Matz has been throwing really well, allowing two earned runs or fewer in all four of his August starts and in six of his last seven outings overall. That includes his last start against the Tigers in which he surrendered one run over six innings of work. He has dropped his ERA from 4.72 at the start of July to 3.94, which is his lowest mark since the end of April.

Matt Manning (3-5, 5.91 ERA): The promising Tigers prospect has had a forgettable 2021 season. He posted an 8.07 ERA over seven starts in his first crack at Triple-A and those struggles have persisted in the majors. Following a respectable July in which he posted a 4.07 ERA over five starts, Manning has a mark of 6.75 in August. He is coming off a career-high 96-pitch outing in which he allowed two runs over 4 2-3 innings to Cleveland.

The Over is 15-5-1 in the last 21 meetings in Detroit. Find more MLB betting trends for Blue Jays vs. Tigers.

Toronto, clinging on in the AL wild-card race, will be out for revenge after losing the last series to Detroit at home which kicked off a disappointing 3-4 homestand at a pivotal point in the season.

The Blue Jays' offense disappeared for much of the seven-game stretch at Rogers Centre but finally woke up in Thursday's series-finale loss to the White Sox, as the club put up seven runs after scoring three or fewer in six straight games prior. Against Manning, we like the bats to continue where they left off.

The Tigers have dropped four of Manning's last five starts, a stretch in which opposing batters have hit .324 off him while slugging .500 with an .868 OPS. For the season, he hasn't been much better, as hitters are smacking him around for a .301/.353/.470 line after he got shelled in Triple-A before his promotion.

Matz, meanwhile, is on a solid run — putting up a 1.25 ERA over four August starts — and gives the Blue Jays a big edge when it comes to the starting pitching matchup, erasing any doubt of taking the Tigers as a +140 home favorite.

That said, we're not touching Toronto at -161, either, so we're going with the Blue Jays on the runline at plus money.

Toronto's offense had been ice cold but this is a good spot for the talented and powerful group to get back on another hot streak after showing signs of life against the White Sox on Thursday.

Manning has flashed very little swing and miss (4.89 K/9) in his rookie MLB season and been pounded to the tune of a 5.91 ERA across 11 starts. He has allowed contact more frequently than all but two pitchers who have thrown a minimum of 50 innings this season, which has led to a lot of hits and a bloated 1.56 WHIP. That won't mesh well with the Jays, who won't be fooled here, as they rank Top 5 in contact rate and are the second most difficult team in the majors to strike out.

Toronto will have no problem putting runners on base for its big boppers, who have powered the club to the most homers in the AL and second-highest OPS in baseball. While George Springer's bat is a real loss, especially as Vladimir Guerrero Jr. and Bo Bichette struggle, Teoscar Hernandez and Marcus Semien have been tearing the cover off the ball and combined for 21 homers post-All-Star Game.

Detroit, meanwhile, has struggled to hit for power against lefties but it does rank seventh in batting average versus southpaws and is in the Top 10 for runs scored since the break. And the Over has cashed in seven of Matz' last nine starts. Following him is an untrustworthy Toronto bullpen that was forced to work overtime Thursday after a short stint from Hyun Jin Ryu.

The Tigers 'pen, meanwhile, while improved, has the fifth-highest ERA in baseball. Toronto will score often and do most of the damage to get this past the 9.5 total. 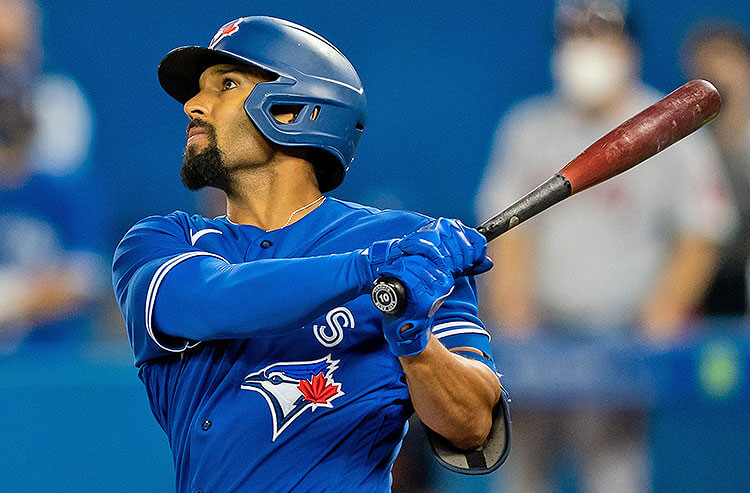