A crucial AL Central series opens in Minneapolis today, with Chicago looking to make gains on Minnesota in the division race. With the White Sox in hot pursuit, our MLB betting picks like the Twins to punish the South Siders.

It's a pivotal divisional showdown for the Minnesota Twins and Chicago White Sox on Thursday night, as the two start a four-game series.

It isn't hyperbole to suggest this is the White Sox's most significant season series. A rough showing could determine the course of the rest of their season, but a positive showing could put them in the thick of the race for the AL Central crown.

The Twins come into this game with a five-game lead over the White Sox and are .500 in their last 10 games.

Who will take the first game of this series? Find out in our MLB picks and predictions for Thursday, July 14, 2022.

The Twins opened as firm -170 favorites, then were quickly bet down to the -160 range and have since remained there. Meanwhile, the White Sox are returning in around the +140 range. The total opened up at 8.5 and has remained there.

Johnny Cueto (3-4, 2.91 ERA): Cueto has been pretty lucky, as his xERA hovers around 4.0, marking one of the largest discrepancies between ERA and xERA of starting pitchers. What's most damaging to Cueto is his hard-hit and anemic whiff rate, with his success predicated on ground balls and soft contact throughout his career.

When he was at his best, over 55% of his pitches were ground balls. This season has been a far cry from that, and he's turned into more of a flyball pitcher.

Sonny Gray (4-2, 3.03 ERA): Gray’s ERA is in line with what the quality of his pitches suggests it should be. His 1.06 WHIP has been solid, and you can generally count on Gray to give you a quality start on a game-to-game basis.

Speaking of which, Gray is coming off his worst start of the season. His last outing came against the Rangers, and he was hit pretty hard, giving up five earned runs through four innings. It was an unusual performance for Gray, marking the first time he had surrendered five or more runs in a start this season.

The White Sox are 0-5 in their last five games in Minnesota. Find more MLB betting trends for White Sox vs. Twins

When I look at this matchup, I see a consistent pitcher against an erratic one. When I look at the teams, I see the same thing. The Twins are 5-1 this season against the White Sox in head-to-head matchups. There's a reason for that, and I will look to back them again today.

The leading edge that Twins hitters have against Cueto is centered around their barrel rate.

I have preached this all season, but the Twins quietly have some of the best power hitters in baseball. They don't have as many household names as some of the teams you associate with offenses, and they get overshadowed, but they are still lethal.

Coming into today, Minnesota had the third-best barrel rate in baseball, trailing only the Braves and Yankees. The problem for Cueto? That's been his most significant issue. His 6.5% barrel rate ranks him in the bottom 25% of all qualified pitchers in baseball.

I currently have the Twins ranked sixth in my MLB Power Rankings, which is an excellent example of how my projections view them compared to the general public.

With that said, I have some PTSD from their bullpen-blowing games in the past. Consequently, I have a hard time betting them on the moneyline because of it. The good thing about today is I see a more considerable edge on the first five market anyway.

I price them at -145 to have a lead after five innings — not a massive edge on the current price, but enough for me to play it.

We're fading Cueto again in this spot. The 8.5 total is spot-on, and I wouldn't be interested in betting either side. However, I'd like to again key on Cueto's issues in this matchup.

If you look at some of his worst showings this season, they've come mostly against the power bats. While Cueto has had impressive performances against the Yankees and Astros alike, I can't ignore the other side of that — which is pretty much all of his rough showings against teams ranking in the Top 10 of barrel rate.

Against the Dodgers and Blue Jays, Cueto gave up a minimum of three runs. His worst performance came early in the season against the Cubs, when he surrendered five runs. At the time, the Cubs had a Top-5 barrel rate and one of the best offenses in baseball.

Another angle here that makes me want to target Cueto? He can be fully classified as a flyball pitcher now. Over 35% of balls that are put into play against him result in a flyball. That's just the matchup the Twins’ hitters prefer, with virtually every one of their slash numbers being above the league average. The most important? They are averaging nearly three runs per game against those types of pitchers.

I'll bet the Over on the Twins team total today, backing them to put at least five on the board. They've accomplished this feat in five of six games vs. the White Sox this season.

They have the right matchup to make it a sixth time today.

For my money, Luis Arraez is the best hitter in baseball, and I'm factoring him into my best bet today.

Arraez is at his best against flyball pitchers, and he should get at least two looks against one in Cueto today. On the season, he has a .345 batting average against flyball pitchers. Based upon that average, we can imply that he'll have around a 56% chance to get a hit off Cueto if he sees him twice, and close to a 70% chance of getting a hit if he sees him another time.

So, I take my chances that he does it, and since I've spoken at length about why I like the Twins in this matchup, I'll pair it with their moneyline.

Pick: Same-Game Parlay - Luis Aarez to get a hit + Twins moneyline (-110 at DraftKings) 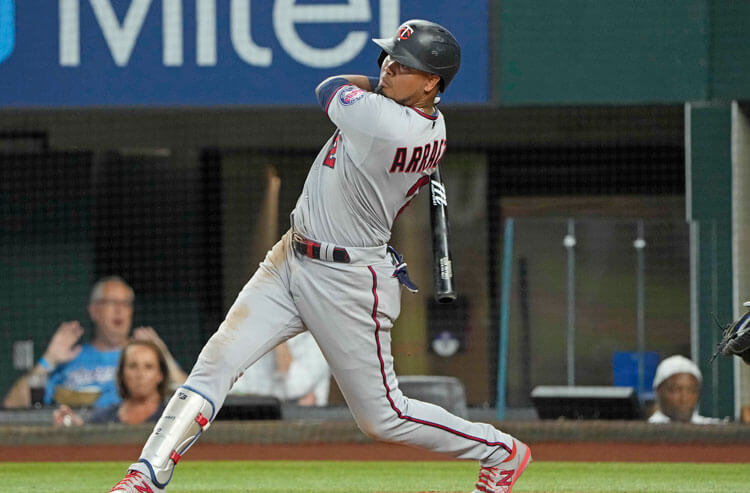