Toronto's bats have come alive and powered it to eight wins in a row. It'll go for No. 9 tonight as a depleted Minnesota team visits. We break down the MLB betting value here with our Twins vs. Blue Jays picks.

The Toronto Blue Jays are starting to hit the way many expected them to prior to the season and have ridden this wave of hitting to eight wins in a row. They’ll go for No. 9 when they host the AL Central-leading Minnesota Twins.

With Chi Chi Gonzalez toeing the rubber against Yusei Kikuchi, there could be plenty of fireworks in the opener of this weekend set. But is a total of 9.5 too high to attack the Over?

Find out in our free MLB betting picks and predictions for Twins vs. Blue Jays on Friday, June 3.

The Blue Jays opened this AL matchup as hefty -215 home favorites but that hasn’t stopped bettors from backing them, moving the line as high as -235 at some sportsbooks. The total hit the board at 9.5 and that number has been juiced to the Under as of Friday afternoon.

Yusei Kikuchi (2-1, 3.48 ERA): Kikuchi really bounced back in May after a terrible April. In five starts last month, the lefty pitched to a 2.36 ERA while limiting opponents to a .177 batting average and striking out 32 batters in 26 2-3 innings.

The Under is 5-1 in the Twins' last six games when facing a left-handed starter and 6-2 in the Blue Jays' last eight games as a home favorite. Find more MLB betting trends for Twins vs. Blue Jays

The Blue Jays completed the three-game sweep of the White Sox, extending their winning streak to eight games with an 8-3 victory yesterday thanks to some big games from Teoscar Hernandez and Santiago Espinal.

Toronto is starting to string together hits and put up big innings and has scored at least six runs seven times during this eight-game winning streak. And, of course, the Jays are hitting much better with runners in scoring position. Prior to last week’s series in L.A., the Jays were hitting just .178 with RISP and have bumped up that number 36 points since then.

The Jays will have a great chance to extend that streak when the Twins come to town on Friday night.

The Twins enter this series a bit of a hot mess at the moment, losers of three in a row and seven of 10. They will also be without a large contingent of regulars due to a combination of injuries and players being unvaccinated, including Carlos Correa, Miguel Sano, Max Kepler, and seemingly half their bullpen.

Additionally, they are calling up Chi Chi Gonzalez to make his first MLB appearance of the year. Last year with the Rockies, Gonzalez pitched to an expected ERA of 6.81 and surrendered an expected batting average of .314. Both were among the league-worst.

The Jays counter Gonzalez with Yusei Kikuchi, who has really turned around his season after a tough start. The lefty didn’t allow more than two earned runs in a start over five starts in the month of May. He faces a Minnesota team that ranks 16th in batting average and OPS when facing southpaws and will be without some of its most productive players.

Kikuchi is pitching well and the Jays are hitting as a team, while the Twins are down several key players and are starting Chi Chi Gonzalez. It feels like a trap but we’re leaning towards taking the Jays on the run line.

This game features a high total of 9.5 but it might be a touch too high because if this game goes Over, it is because the Jays did all the heavy lifting.

Yes, Toronto is averaging seven runs per game during this stretch, but even that may not be enough to send this one Over, considering the state of the Twins heading into this matchup.

No Max Kepler, Carlos Correa, or Miguel Sano, and that’s for a team that was already struggling to score. Minnesota plated just two runs over its last three games and has scored three runs or fewer in seven of its last 11 games overall.

Now, the Twins face a pitcher trending in the right direction who also limited a much more complete lineup to two runs on five hits while striking out six in six innings when they met last season.

This number is just high enough to consider the Under.

The Jays are swinging hot sticks right now. They are averaging seven runs per game over this eight-game winning streak and have scored six or more runs seven times over that stretch.

Now, they’re going against Gonzalez, a guy pitching his first MLB innings this season and who was one of the worst starters in the Bigs last year. Plus, he's supported by a depleted bullpen. Taking the Jays to go Over their team total of 5.5 seems like a solid bet tonight. 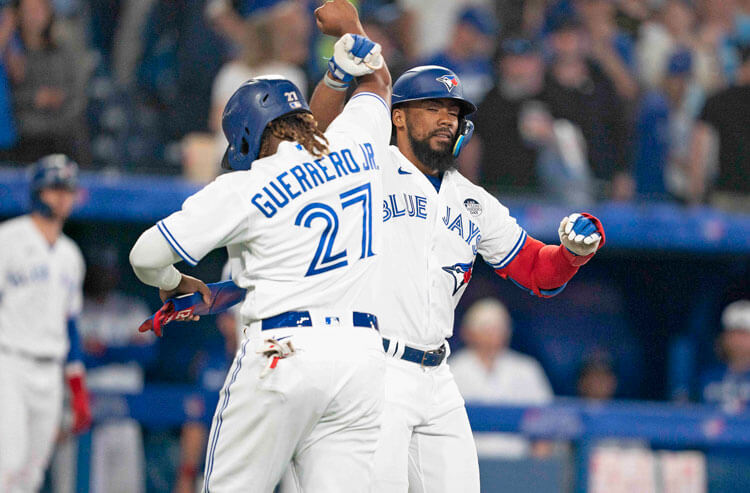