Boston has struggled at The Trop, going 0-6 in its last six meetings, which includes a series-opening loss to Tampa Bay on Monday. But the club is in a good bounce-back spot Tuesday against Ryan Yarbrough. Find out more in our Red Sox vs. Rays picks.

The Tampa Bay Rays have a seven-game lead atop the AL East and will look to increase that on Tuesday night as they host the Boston Red Sox in a division battle.

This will be the second contest in a four-game set at Tropicana Field and MLB betting lines opened with the Rays installed as -135 home favorites for tonight following a 6-1 victory yesterday.

Here are our best free Red Sox vs. Rays picks and predictions for August 31.

Brad Peacock: The veteran righty, who was announced as the starter late Tuesday afternoon, will make his first start since 2019 a day after the Red Sox acquired him in a trade with Cleveland. Peacock made 11 appearances and started 10 games with Cleveland's Triple-A affiliate, posting an unsightly 7.68 ERA and 1.56 WHIP. He tossed 2 1-3 innings with the Astros last season, spending the majority of the year on the injured list with a shoulder injury. Peacock will be pitching on three days of rest, so the Red Sox will likely use a number of arms to get them through the game.

Ryan Yarbrough (7-4, 4.57 ERA): The left-hander has had an up-and-down season, pitching to a 1.19 WHIP with an opponent batting average of .259 through 128 innings. He has surrendered at least five runs in three of his last six starts, including an ugly outing against the Red Sox exactly one month ago.

Red Sox: Kike Hernandez 2B (Out), Christian Arroyo 3B (Out), Matt Barnes RP (Out).
Rays: Ji-Man Choi 1B (Out)
Find our latest MLB injury reports.

The Over is 21-7-2 in the last 30 meetings between these clubs. Find more MLB betting trends for Red Sox vs. Rays.

The Red Sox are barely holding on to the last spot in the AL wild-card race and will need to find some success against the Rays if they hope to stay in the mix.

After last night's loss, the BoSox are 0-6 in their last six trips to Tampa Bay while going just 4-13 in their previous 17 contests on the road. The Rays have the best record in the AL at 83-48 and are an impressive 41-14 in their previous 55 games against division foes.

That said, one thing the Red Sox have been able to do this season is crush the ball, ranking third in the majors with a .771 OPS. And they'll be facing off against a starter they have eviscerated this year.

Yarbrough has been an enigma this season. He has the best hard-hit percentage and exit velocity of any qualified starting pitcher in the majors but his ERA sits at just 5.25 at pitcher-friendly Tropicana Field. And he's been shredded in every one of his three starts against the Red Sox, surrendering 16 earned runs through 12 innings.

Look for Boston to get to Yarbrough again and back them on the moneyline.

We mentioned Yarbrough's poor track record against Boston but the Red Sox don't have a whole lot going for them in the pitching department, either. Peacock can't be trusted after getting torched in the minors and after him will be a depleted and struggling bullpen (1.41 WHIP with an OBA of .246) that has been rocked by COVID.

Both of these squads have also been red-hot at the dish with Kyle Schwarber really settling in at the top of Boston's order. The Red Sox rank second in the majors with an OPS of .812 and are plating 5.26 runs per game during the month of August.

During that same span, the Rays have an OPS of .810 while leading the majors with 6.69 runs per game.

The Rays have gone 6-1-1 O/U in their last eight games at home and the Over has also gone a sizzling 21-7-2 in the last 30 meetings between these AL East foes. Back the Over tonight. 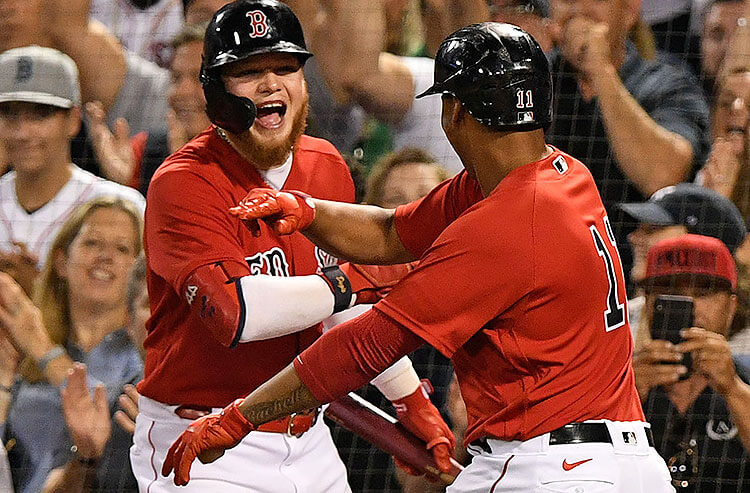