Yusei Kikuchi's All-Star season has gone off the rails in the second half, and we don't see it getting better tonight against an Astros team that just beat up on him less than two weeks ago. His continued struggles cap off our best MLB prop bets today.

Believe it or not, the final day of August is here. But the month goes out with a bang with a loaded slate on the MLB betting board as all 30 teams are in action.

Today we focus on an NL East matchup that should feature fireworks right out of the gate, and a prop for a Blue Jays team that is looking to get its groove back against the Orioles.

We break down and pick these games and more with our best free MLB prop bets and predictions for Tuesday, August 31.

The Philadelphia Phillies are doing their best to track down the Atlanta Braves for first place in the National League East: The Phillies have won four in a row and trail the Braves by 3.5 games for the division lead.

Unfortunately, for Phillies fans and backers, they’ll have to endure another start by Matt Moore tonight. The veteran left-hander has pitched to a 6.82 ERA and is allowing a .269 opponent batting average in eight games since the All-Star break.

Now, he faces a Washington lineup that has still be surprisingly effective, particularly against southpaws, despite the team selling off plenty of its assets at the trade deadline. The Nats lead the MLB in OPS and are second in batting average when it comes to hitting off lefties this season.

Washington counters Moore with a southpaw of its own in Patrick Corbin. Corbin has seen his performance fall off a cliff this season, as the lefty is pitching to a 6.09 ERA and surrendering a .277 opponent batting average this season.

Corbin goes against a Phillies team that is led by a red-hot Bryce Harper and has scored seven runs in five consecutive games. Bet on there to be fireworks early in this NL East matchup.

It’s an understatement to say the Toronto Blue Jays have been struggling lately. Before last night’s game, the Jays had scored 2.7 runs per game over a 10-game stretch and have really struggled to hit with runners in scoring position.

But apparently, the is nothing a date with the Baltimore Orioles can’t fix, and the return of George Springer sure doesn’t hurt either.

The Jays won the opener of their three-game set last night by a score of 7-3 in Springer’s first game back after a stint on the IL for a knee injury. Vladmir Guerrero Jr. also got his groove back by going deep twice last night on a pair of absolute bombs.

Tonight, Vladdy, Springer, & Co. go up against Orioles starter Keegan Akin. The lefty is coming off one of his best starts of the season, limiting the Los Angeles Angels to one run on three hits over seven innings. The problem is that lowered his ERA to 7.26 and his WHIP to 1.70. Akin has also made one start against the Jays this season where he allowed six runs on seven hits in 4 1-3 innings back in June.

With Akin averaging just 4.7 innings per start, that likely means another extended appearance for an O’s bullpen that ranks dead last in the MLB in ERA. Bet the Jays bats to keep finding their groove and eclipse their team total in this one.

It has been a tale of two halves for Seattle Mariners starter Yusei Kikuchi. The lefty pitched to a 3.48 ERA and a 1.09 WHIP in the first half of the season, earning his first career All-Star selection.

But the second half hasn’t been as smooth, with his ERA ballooning to 6.46 and his WHIP to 1.67 in eight starts since the break. Things won’t get any easier tonight as he’ll be going up against the American League West-leading Houston Astros.

Kikuchi recently faced the Astros on August 20, where they got to him for seven runs on seven hits, lasting just 2 2-3 innings. The Astros have one of the best lineups in baseball and are incredibly patient, striking out less than anyone in the MLB at just 7.56 times per game.

Kikuchi managed to strike out just two batters in that game and has struck out just 21 batters over his last 23 innings of work. The potential of a shorter outing and the Astros' refusal to go down swinging means we like the Under on his strikeout total tonight. 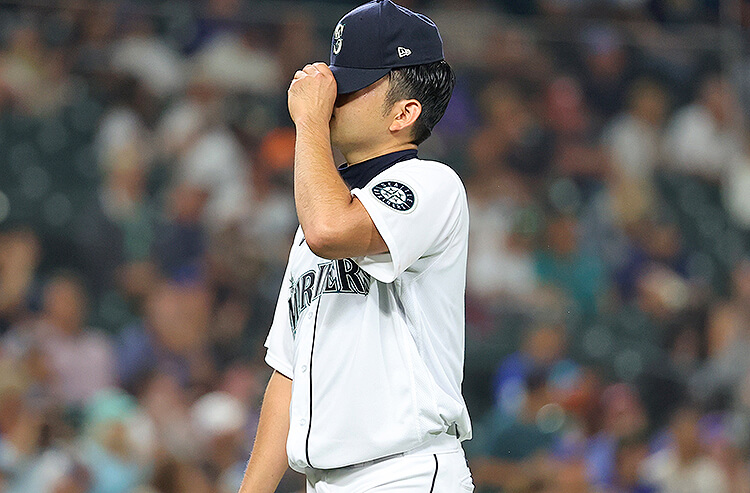