The Giants dropped the series opener against Milwaukee stud Corbin Burnes, and now have to tangle with another dominant Brewers arm on Tuesday. But with Brandon Woodruff not quite as sharp lately, there's reason to like San Fran as a home dog.

The MLB betting board for Tuesday is headlined by a clash between a pair of division leaders as the Milwaukee Brewers take on the San Francisco Giants.

This will be the second contest in a three-game set at Oracle Park and after the Brewers won last night's game by a score of 3-1, they opened as road favorites again tonight.

Here are our best free MLB picks and predictions for Brewers vs. Giants on Tuesday, August 31, with first pitch set for 9:45 p.m. ET.

Brandon Woodruff (8-7, 2.38 ERA): Woodruff has been one of several Brewers pitchers that have been lights out this season, pitching to a 0.93 WHIP with an opponent batting average of .189 through a career-high 151 1-3 innings of work. He's coming off a gem against the Reds, where he fanned 10 batters and scattered four hits across six scoreless innings. That win allowed him to bounce back from his worst performance of the year, when he was shelled for six runs in five innings versus the Cardinals two weeks ago.

Johnny Cueto (7-6, 3.73 ERA): Last night's scheduled starter Cueto who was scratched and placed on the COVID-19 injury list has been removed after testing negative and will take the hill tonight. The veteran has been up-and-down this season with a 1.30 WHIP and an OBA of .275 but he's coming off a strong performance against the Mets where he pitched 4 2-3 scoreless innings.

The Over is 3-1-2 in the last six head-to-head meetings in San Francisco. Find more MLB betting trends for Brewers vs. Giants.

The Giants may have lost last night but they are still 20-8 in their previous 28 games and have the best record in the majors at 84-47. That said, they can't afford to take their foot off the pedal because they play in the same division as the Los Angeles Dodgers, who are just 1.5 games behind them.

The Brewers are 80-52 but have a much more comfortable lead atop the NL Central with a 9.5-game buffer between themselves and the Reds.

The key to the Brewers' success this season has been the outstanding play of their rotation and today they'll have one of their top starters take the hill in Brandon Woodruff. The right-hander boasts a 2.38 ERA with a 0.93 WHIP on the year but there's reason to think that he might not be quite as dominant as those numbers indicate.

Woodruff's expected ERA of 3.05 is more than half a run higher than his actual ERA, and since the start of July, he has pitched to a more modest 3.40 ERA with a 1.21 WHIP across nine starts. More importantly for bettors, the Brewers went just 3-6 in those nine starts.

There was some confusion about who the Giants would start on the mound tonight but after Johnny Cueto tested negative for COVID he will reportedly get the ball. The 35-year-old has looked shaky at times this season but has been sharp lately, pitching to a 2.64 ERA over his last six starts. And the Giants have one of the best bullpens in the majors behind him with their relievers leading the MLB in WHIP (1.08) while ranking second in both ERA (3.18) and OBA (.214).

The Giants have struggled at the plate over their last two games but they still rank an impressive fifth in the majors with an OPS of .757. The Brewers lineup has been hitting the ball much better since the All-Star break but is just 18th in the majors in OPS at .717 on the year.

Look for the Giants to bounce back from last night's loss with a win as home underdogs.

The Over/Under for this game is set at just 7.5 but that could be a tad too low. Despite Woodruff's play this year, the Over has cashed in three of his last four starts and the Brewers are 9-4 O/U in their last 13 road games with the total set between 7 and 8.5.

The Brewers have been one of the better hitting teams in the majors since the All-Star break, ranking seventh in OPS at .776 while plating 5.38 runs per game. With winds reaching up to 12 miles per hour and blowing out towards left field at Oracle Park today, we're leaning towards the O7.5. 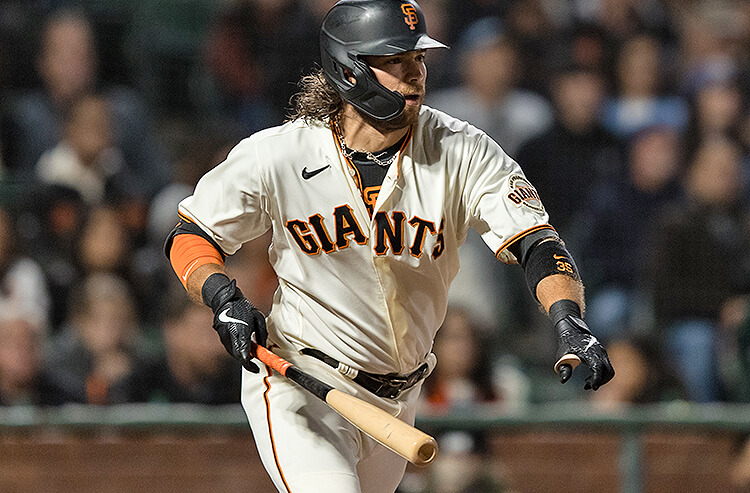