These teams continue a huge three-game set at T-Mobile Park after the M's took the series opener. Expect a tight game with both teams fighting for a wild-card spot, but the home side has good value as a dog. Find out more in our Red Sox vs. Mariners picks.

The Boston Red Sox and Seattle Mariners face off on Tuesday night in what could be a crucial series for the AL wild-card race. The Red Sox are tied with the Yankees for the final playoff spot, just one game behind the Blue Jays and two ahead of the Mariners.

The BoSox lost the first contest of this three-game set in Seattle last night but oddsmakers expect them to bounce back, with MLB betting lines installing them as -145 road favorites for tonight.

Here are our best free Red Sox vs. Mariners picks and predictions for September 14.

Nathan Eovaldi (10-8, 3.57 ERA): The veteran is having a solid season for Boston, pitching to a 1.15 WHIP with an opponent batting average of .248 through 28 starts. He's coming off an excellent performance against Tampa Bay where he limited the Rays to just three hits across seven innings of shutout ball.

Tyler Anderson (6-9, 4.20 ERA): The southpaw was acquired by Seattle at the trade deadline and has pitched to a 3.83 ERA with a 1.21 WHIP and an OBA of .264 in eight starts with his new club. In his last outing, Anderson allowed seven hits and four earned runs across 4 2-3 innings versus the Astros.

Red Sox: Danny Santana OF (Out), Christian Arroyo 3B (Out).

Mariners: Jake Fraley OF (Out), Kyle Lewis OF (Out).

The Red Sox are 5-14 in their last 19 road games versus a team with a winning record. Find more MLB betting trends for Red Sox vs. Mariners.

With the 2021 MLB season ending in less than three weeks, it's crunch time for the teams battling it out for a postseason berth. The Red Sox are in a dogfight for a wild-card spot as they compete against division rivals Toronto and New York, but the Mariners are also still very much in the picture as they sit just two games behind Boston with a 78-66 record.

The Red Sox have been one of the most productive offensive teams around, ranking third in the majors with an OPS of .772. That said, they hit the ball much worse on the road where they plate just 4.33 runs per game with an OPS of .719.

In general, the BoSox have been playing significantly worse on the road than they do at Fenway and they are just 7-17 in their last 24 away contests. The Mariners don't have a good run differential but have been grinding out wins throughout this season, especially at home where they are 42-31 and have turned a profit of plus-15.6 units.

The Red Sox will send Eovaldi to the mound today and while the veteran has looked sharp lately, he's far from a reliable stud. The M's respond with Anderson, who has middling numbers when it comes to ERA (4.20) and WHIP (1.20) but ranks in the Top 15 among qualified starters when it comes to exit velocity and hard-hit rate.

Seattle also has the stronger bullpen, with its relievers fourth in the majors with a 1.21 WHIP while Boston's relievers rank 24th with a WHIP of 1.41. That could be a key difference when you get to the last few innings of what should be a tense game with a postseason atmosphere.

With the Mariners going 11-5 in their last 16 games as an underdog at home, coupled with how poorly the BoSox have been on the road lately, back Seattle at plus money.

When you think of the pitcher-friendly confines at T-Mobile Park you probably think of lower-scoring games, but oddsmakers might be setting totals a bit too low in Seattle. The Over is actually 13-3 in the last 16 meetings between these teams, including 6-0 in the last six games in Seattle.

As unreliable as the Mariners have generally been at the plate, they are averaging an impressive 5.5 runs per game over their last 10 contests. And while Eovaldi has sizzled lately, he also has a 4.87 ERA with an OBA of .282 in 11 away starts this year.

Although the Red Sox haven't been hitting the ball well on the road, they still have a stacked lineup that's more than capable of stringing together hits when they get on a roll. With the Mariners cashing the Over in 10 of their last 11 games overall, take the Over tonight. 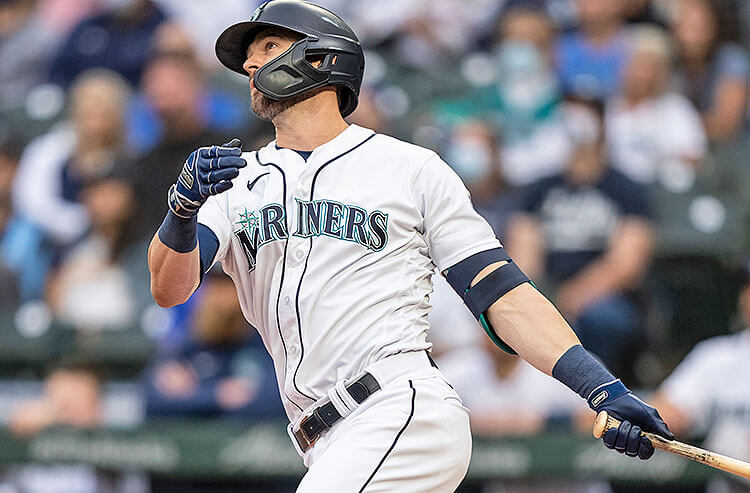