Padres vs Giants Picks and Predictions: Fade Jake Arrieta In Every Way Possible

The Giants have the MLB's best record, they're red-hot, and they're facing a Padres' starter in Jake Arrieta who is straight-up bad right now. So do we like San Fran to win tonight? Yes, so much that we're taking them on the run line!

The San Diego Padres try to jockey for the last Wild Card spot in the National League as they tangle with the division-leading San Francisco Giants on Tuesday night.

This is the second contest in a four-game set at Oracle Park in San Francisco and MLB betting lines opened with the Giants as -154 favorites before soon moving to -175.

Here are our best free Padres vs. Giants picks and predictions for Tuesday, September 14, with the first pitch scheduled for 9:45 p.m. ET.

Jake Arrieta (5-12, 7.04 ERA): The veteran righty was released by the Cubs in August after looking like one of the worst pitchers in the majors this season. He hasn't been any better with his new club, allowing eight earned runs through 8 1-3 innings in a pair of appearances against the Astros and Rockies.

Anthony DeSclafani (11-6, 3.33 ERA): The 31-year-old is having a breakout year in San Fran, putting up career-best numbers in ERA, WHIP (1.12), and opponent batting average (.225), He's coming off a rough performance where he allowed seven hits and three runs in 4 1-3 innings but that was at hitter-friendly Coors Field. Prior to that outing, he pitched a gem against the Dodgers where he went six scoreless innings and allowed just two hits.

Padres: Jake Cronenworth 2B (Out).
Giants: Donovan Solano 2B (Questionable), Alex Dickerson OF (Out).
Find our latest MLB injury reports.

The Padres are 1-10 in their last 11 games as a road underdog. Find more MLB betting trends for Padres vs. Giants.

The Padres were crushed 9-1 by the Giants last night and are now just 8-20 in their last 28 games. They are now a half-game behind the Reds for the final Wild Card spot in the NL and are also fighting off the St. Louis Cardinals, who have an identical 74-69 record.

The Giants have the major league's best record at 93-50 and are on an eight-game winning streak. The Giants have excelled both at the plate, where they rank fourth in the majors with an OPS of .769, and on the mound, where they allow the second-fewest runs per game.

That pitching production is due to an outstanding bullpen (with San Fran relievers pitching to an MLB-best 3.02 ERA) and a slew of starters posting breakout seasons — including Anthony DeSclafani, who gets the nod tonight and has a 3.33 ERA with a 1.12 WHIP in 27 starts this year.

The Padres will respond with the recently acquired Jake Arrieta... who has been awful. In 22 starts with both the Cubs and Friars, Arrieta has pitched to a whopping 1.73 WHIP while allowing opponents to bat .314.

With San Diego struggling at the dish and sending one of the worst starters in the game to the mound, don't even think of taking them against the club with the best record in the majors. With seven of the Giants' last 10 wins at Oracle Park coming by multiple runs, back them on the run line — at plus money

With the Over/Under opening at 8.5, before ticking up to 9, this is a tough total to figure out. The Padres have been brutal at the dish over the last 30 days, plating just 3.63 runs per game. However, the Giants have been mashing, ranking second in the majors with an OPS of .852 over the last 15 days and averaging 6.07 runs/game over that span.

When it comes right down to it I think the Padres lineup, led by Fernando Tatis Jr. and Manny Machado, is better than their recent numbers suggest. And it is worth mentioning that the Friars average a solid 4.71 runs per game when they are away from their pitcher-friendly home field at Petco Park.

Arrieta has also been horribly bad lately, allowing at least four earned runs in seven of his last 12 starts and pitching to a disgusting 10.10 ERA over that span. With the Over cashing in six straight meetings between these NL West rivals, back it again tonight. 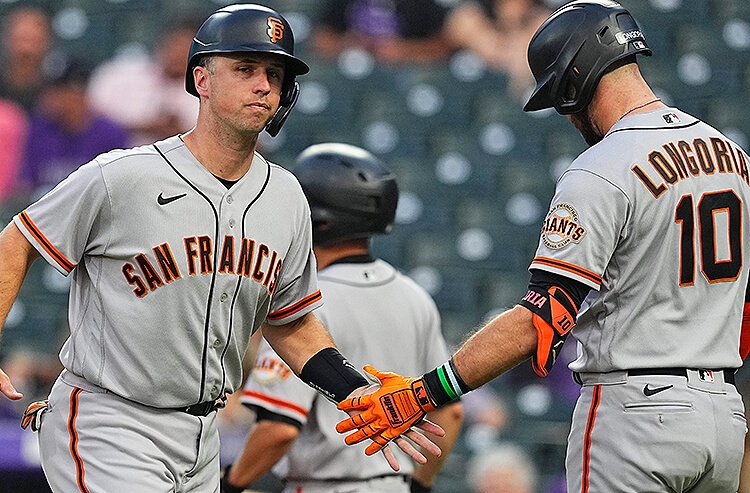 Padres vs Giants Picks and Predictions: Fade Jake Arrieta In Every Way Possible
Provided by