Toronto is averaging 8.7 runs per game while going 12-1 this month to move into first in the AL wild-card race. Tampa is also smashing the ball, ranking second in MLB in OPS since the ASG. Expect runs tonight. Find out more in our Rays vs. Blue Jays picks.

The Toronto Blue Jays will go for their fifth consecutive win when they resume their three-game set with the AL East-leading Tampa Bay Rays on Tuesday night.

Toronto's relentless offense struck again in the series opener, pounding out 17 hits in an 8-1 win, with stars Vladimir Guerrero Jr. and Bo Bichette going yard. Toronto held the powerful Rays to two hits and one run to keep the Jays atop the AL wild-card race with 18 games remaining.

Find out who we like tonight in our free MLB betting picks and predictions for Rays vs. Blue Jays on September 14.

Drew Rasmussen (2-1, 3.35 ERA): Rasmussen, acquired in a midseason deal with the Brewers, has been a strong addition to the Rays' rotation since joining the starting staff last month. He has a 1.64 ERA (2.34 FIP) over five starts while holding opposing hitters to a .190 batting average, with three of those outings coming against a strong Red Sox lineup, including his last one.

Jose Berrios (11-7, 3.52 ERA): The righty has had a couple of clunkers since joining Toronto, but has largely been as advertised while enjoying an uptick in punchouts. Berrios has a 3.63 ERA over eight starts with Toronto while striking out 10.3 batters per nine innings, which would be a career-best mark if sustained over a full season. He handled the Yankees in his last outing and has logged three consecutive quality starts.

The Over is 6-1-2 in the Rays' last nine games. Find more MLB betting trends for Rays vs. Blue Jays.

The Blue Jays enter tonight's game alone in second place in the East with a full one-game lead over the rival Yankees and Red Sox in the AL wild-card race, while sitting two games up on the Mariners and 2.5 ahead of the A's. It's certainly not comfortable, but it's the best position they've been in this season. That's thanks to a torrid run that has seen Toronto win 15 of its last 17 games, including an MLB-best mark of 12-1 in September.

Toronto's offense gets the headlines, and rightfully so, as they've scored five-plus runs in all of their September games except the lone loss, averaging 8.7 runs per contest for the month. But the pitching has been pretty good, too, with Cy Young contender Robbie Ray and deadline acquisition Jose Berrios leading the charge — and pitching in the next two games of this series — while rookie Alek Manoah just tossed the best game of his career Monday.

Speaking of Berrios, he's been on a nice run for Toronto, compiling a 2.21 ERA over his last three starts while striking out 26 and walking two over 20 1-3 frames, working into the seventh inning in each of those outings. Manoah fanned 10 Rays last night and Berrios is positioned to produce a lot of swings and misses himself, as he has struck out six-plus batters in four straight starts and gets a Rays team that has the sixth-highest K rate against righties since the All-Star break.

Rasmussen, meanwhile, has thrown well, allowing one run or fewer in each of his last five starts. But he hasn't thrown more than 74 pitches or five innings in an outing and it's difficult to see him topping those marks against this potent lineup. That means Tampa Bay is going to have to unload the bullpen (which has been hammered by injuries and has a 5.17 ERA over the last 15 days) a night after using strong right-hander Collin McHugh as an opener for 2 1-3 innings, meaning he'll be down tonight, and deploying three other relievers after Toronto destroyed Ryan Yarbrough. It's not the most ideal situation against the majors' most lethal offense.

Tampa, like last night's series opener, offers great value as an underdog. They have the best record in the AL and the only team that has a better second-half offense, as measured by wRC+ and OPS, is Toronto. There will come a time soon to fade the Blue Jays, but it's not tonight. Not when they are swinging like this behind one of their best pitchers.

Both Berrios and Rasmussen have been throwing the ball well but it's tough to envision either of them, and the relievers that follow, doing enough to keep this number down at the hitter-friendly Rogers Centre. This isn't Tropicana Field. Toronto's stadium is a home run-hitting environment and no teams in the AL have been hitting it out of the park as often as the Blue Jays (who lead the majors in September homers by a whopping 13 bombs) and Tampa Bay since the ASG.

And they get on base at high clips, too, with the Blue Jays tied for first in OBP over that same stretch and the Rays eighth. The ability to get guys on and go yard will lead to runs, which is an area both clubs have excelled at this season.

The two teams are first and third in runs per game, with the No. 1 Rays scoring nearly a run more per contest on the road. As a team, the Blue Jays are hitting a staggering .331/.410/.636 — good for a 1.046 OPS — in September and lead the majors with 114 runs scored. That's 32 more runs than any other team. Toronto has eight players with an OPS over 1.000 for the month, with the .352-hitting Bichette not far behind at .952. Tampa's numbers, like any team, pale in comparison but the Rays are still fifth in runs and sixth in slugging and OPS during the month.

It's really tough to ask any pitcher to silence these lineups right now. Toss in the fact that the Rays — who have the second-best O/U mark in MLB — have gone Under only once in their last nine games while Toronto has gone six consecutive without going Under, and we're backing the Over tonight. 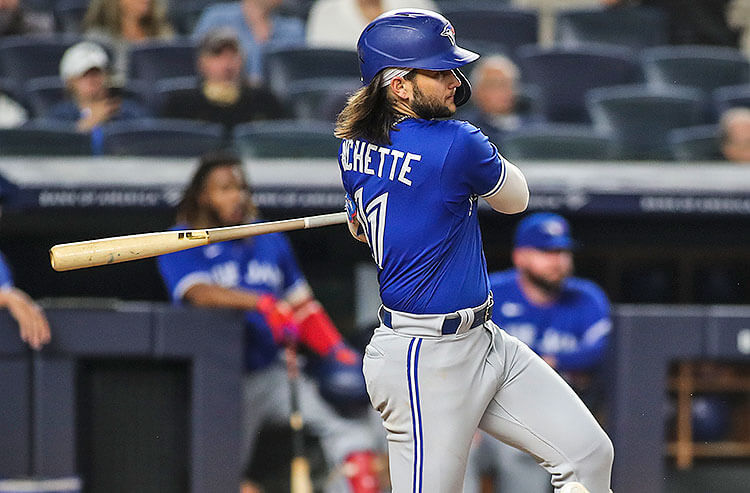