Rays vs Yankees Picks and Predictions: Another Tight Clash in the AL East

New York has been one of MLB's best teams and nearly unbeatable at home — but where does that leave the MLB betting value? In today's meeting between the Rays and Yankees, our picks and predictions land on another tight game.

The New York Yankees are 30 games over .500 and looking to sweep the Tampa Bay Rays tonight at Yankee Stadium, following last night’s 4-3 victory.

This is becoming a historically good New York team that is loaded up and down the roster, but with Luis Severino getting scratched due to health and safety protocols and the Yankees moving from -250 to -170 on the moneyline as a result, can the Rays and their bullpen day grab a win and avoid the sweep?

Find out in our free MLB picks and predictions for Rays at Yankees.

(Editor's Note: The total and best bet picks were made prior to Thursday afternoon's announcement that Luis Severino would be placed on IL. The run line analysis has been updated to reflect Clarke Schmidt starting in his place for the Yankees.)

The Yankees opened as short as -290 but bettors have reeled that price back as they're currently -250 on the ML Thursday morning. New York closed as -205 in the opener and at -135 yesterday. The total opened at 7.5 and is leaning to the Over.

Jalen Beeks (1-1, 1.38 ERA): Beeks will be today’s opener and likely won’t pitch more than two innings. He has made just one other start this season and went two innings versus the Orioles and allowed just a single hit. He’ll give way to a rested Tampa bullpen that has a Top-10 ERA on the season.

Clarke Schmidt (3-3, 3.26 ERA): Luis Severino was scratched (COVID) at around 3:30 ET and will be replaced by RHP Clarke Schmidt. The emergency starter has made 11 appearances this season (zero starts) and owns a strong 3.26 ERA and a 1.12 WHIP with a 15/10 K/BB ratio over 19-plus innings. He’s allowed just 12 hits in what is his third MLB season. It will be a bullpen day for the Yankees.

The Rays are 13-6 SU in the last 19 meetings in New York. Find more MLB betting trends for Rays vs. Yankees

The Yankees are 30 games above .500, have won 13 of their last 14 games, and 13 straight at Yankee Stadium, which is the longest winning streak at the new park. The last time the Yankees won 13 straight at home was back in 1971. However, the books know this is an elite team and we aren’t getting any price breaks here.

What we do know is that the Yankees will be facing Tampa opener Jalen Beeks, who should go one to two innings. He’ll then give way to a Tampa bullpen that sits in the Top 10 in ERA and is very fresh after using some non-important arms in yesterday’s loss and Tuesday’s opener.

Beeks has made only one start this season, but this is a Tampa team that plays the opener game better than anyone in baseball. The Yankees will get a heavy dose of different arm angles and styles of pitching and likely won’t see the same pitcher twice in the game. Including Beeks, the Yankees could see four relievers with sub-2.20 ERAs today, in what is also a get-away game for the Yankees who cross the border to Toronto for Friday.

The Rays have moved 80 points on the moneyline from the change to Luis Severino to Clarke Schmidt. Schmidt has not gone more than eight outs this season and although the former first-rounder could keep this close, he’ll be handing things over to a bullpen that is dealing with injuries and used four relievers yesterday.

New York middle-reliever Wandy Peralta has pitched in back-to-back games and is likely unavailable, which hurts the Yankees as he could have eaten two innings. A candidate for innings today could also be 31-year-old left-hander Ryan Weber, who just had his contract purchased from Triple-A. Weber is a journeyman who rarely touches 90 mph and might just be asked to handle the load in this emergency situation.

If there was a game for the Yankees to punt and get their bullpen back in order for a big series with the Blue Jays, it’s today.

Tampa also has a chance to get a couple of late runs as New York closer Clay Holmes has pitched in back-to-back games and could be unavailable tonight.

Both games in the series have been close, with New York winning 2-0 in the opener and 4-3 yesterday, but this Tampa offense has out-hit the Yankees and has the pitching advantage today.

Tampa manager Kevin Cash is also one of the best bench bosses when it comes to managing a bullpen, and we’re confident he can navigate this elite offense with a barrage of relievers.

We aren’t fully committing to the Rays, but expect them to keep this game close with their rested bullpen eating a ton of innings. Give us a one-run AL East showdown as the Rays will be trying to avoid the sweep.

Despite having arguably the best offense in baseball, the Yankees have been profitable to the Under on the season. They’re the hardest team to score on in the league and we’re thinking runs will be at a premium Thursday night in the Bronx.

Severino comes into the meeting on the heels of back-to-back double-digit strikeouts and his slider has been an elite whiff pitch, with batters swinging through it at 44.4%. The Rays did take him deep twice 20 days ago but he also allowed just two hits and two walks. The Under has easily hit in all four of his last starts, as a total of 17 runs were scored in those four games.

Tampa will be going with an opener for today and although it hasn't been using this approach as much as in seasons past, the bullpen is set up perfectly for Beeks to go one time through the order and then hand off to a rested and very effective bullpen. The Tampa bullpen is much more fluid than other teams and relievers have no issues coming in at any time.

Kevin Cash is a master of matchups and he’ll be able to map out his pen with the Yankees’ order, and if any troubles arise, Cash could have a quick leash for his pitchers today.

Offensively, the Rays have not been sticking well in the Bronx, but the games have been so close that they’ve been competitive despite dropping the first two games. Tampa and New York have been near the top of the division over the last couple of seasons and have developed a good rivalry. Only one of the six meetings this season has produced eight or more runs.

Looking at the weather, the temperature will be relatively low in the high-60s, while the humidity will be slightly high at 70%. A strong wind, however, will be blowing from right to left field, which should make right field play longer and knock down some fly balls. There could be some lightning in the area but it might pass to the West of the state.

The total is starting to tick up to 8 and savvy bettors who are looking to hit this Under may want to wait to see if the total does move north. But, at even money, we’re still liking this Under 7.5 in what we expect to be another close game between the two AL East rivals in the Bronx.

He’s been getting deep, having recorded at least 18 outs in five straight starts, and has 49 strikeouts in 38-plus innings at home this season.

The Rays showed they can take him deep in the last meeting, when Tampa went deep twice off Severino, but even those hits won’t hurt his chances at getting deep.

The starter’s slider has been one of the best pitches in baseball as it currently has a 44.4% Whiff%. Severino has done a great job at setting up the slider, as his fastball and change-up have also been electric. 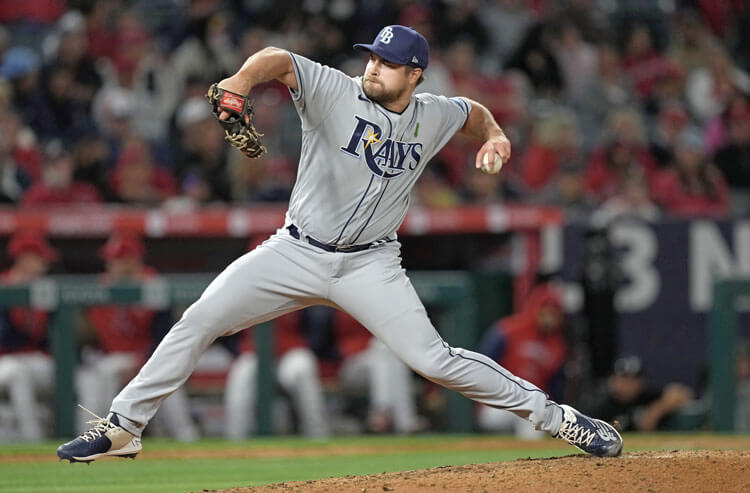 Rays vs Yankees Picks and Predictions: Another Tight Clash in the AL East
Provided by