Rangers vs Tigers Picks and Predictions: Martin Comes Up Short on Mound

Martin Perez is having himself a career outlier season that's almost too good to be true. Is it? We think Detroit's one of the teams that can expose him — find out why with our Rangers vs. Tigers MLB betting picks.

The Texas Rangers (29-33) entered the month of June with a .500 record but have since dropped to four games under after starting the month 5-9. They will look to get their playoff hopes back on track by opening up a four-game set with the Detroit Tigers (24-38), one of the American League's bottom-of-the-barrel clubs and losers of four straight. Can the Rangers take advantage of the opportunity, or will their perilous June continue?

Continue reading for free MLB picks and predictions for the Rangers vs. Tigers matchup on Thursday, June 16th.

The Rangers opened as modest -140 favorites and have since moved as high as -165 at some shops, while the Tigers can be found at prices up in the +145 range. The total opened at 9.0 but has since moved to 8.5, with even odds for both sides at most books.

Martin Perez (4-2, 2.18 ERA): Perez has largely been a middle-of-rotation starter for the vast majority of his 11 year career and has changed teams three times in the last four seasons. Following stints with the Twins and Red Sox, Perez returned to the Rangers this offseason — the club he spent his first seven seasons with.

Beau Brieske (1-5, 4.34 ERA): The 24-year-old has handled his debut season admirably all things considered. A 4.34 ERA and 1.28 WHIP is nothing to scoff at given his inexperience and he at least is showing the ability to eat up innings reliably, having gone under five innings in just one of his nine starts.

He’s started June off particularly well, allowing just two earned runs, 10 hits, and one walk across 11.2 innings against the likes of the Blue Jays and Yankees.

The Tigers have gone 6-3-1 to the Over in their last 10, and have scored at least three runs in 19 of their last 22 games. Find more MLB betting trends for Rangers vs. Tigers

Rangers vs Tigers picks and predictions

Baseball, given its very rich analytical history relative to other major sports, is supposed to be (in theory) the most measurable and projectable sport of the bunch. But even then, every season still manages to throw its fair share of curveballs.

One of this season's curveballs, at least thus far, is the emergence of Martin Perez as an elite-level pitcher. The 31-year-old is in his 11th season and possesses a career 4.55 ERA, 1.46 WHIP, and 67-71 record. He has just one season under his belt with a sub-4.00 ERA, which was nine seasons ago, in 2013. Heck, given that his next-best mark is 4.38, that season is largely an outlier when looking at his larger body of work.

Perez spent the last three seasons on the Twins and Red Sox and largely did what he did best: serve as a middle-to-end-of-rotation arm that could eat up innings. This offseason the Rangers, who Perez spent the first seven seasons of his career with, took a flier on him with a one-year $4 million contract. The expectation, quite obviously, was for Perez to continue operating in his unspectacular role.

The player they got instead was something entirely different. Prior to his last outing, Perez went his first eleven starts without allowing more than three earned runs. In fact, he had an eight-start streak in which he allowed one or no earned runs. He even logged a complete-game shutout of the Astros in mid-May.

In his last outing, a team finally got to Perez. The White Sox touched him up for 12 hits en route to six earned runs in five innings. That outing alone ballooned his ERA from 1.56 to 2.18, a mark that is still undeniably impressive. However, there is a cause for concern given his underlying metrics.

To his credit, he has managed a 75th percentile walk rate and 92nd percentile allowed barrel rate (balls batted 98+ mph). But outside of that, he's managed just a 34 percentile strikeout rate, 20th percentile whiff percentage, and 39th percentile chase rate. In essence, he's not getting batters to swing and miss, whether the ball is in the zone or not. That's unsurprising given how unspectacular his fastball is relative to other pitchers (23rd percentile velocity, 14th percentile spin rate).

And given that he has spent his entire career in the American League and a season in the AL Central when he was with the Twins, he has racked up quite a sizable sample against these Tigers batters. In 96 combined plate appearances, these current Tigers have managed a .293 batting average and a .500 slugging percentage. Miguel Cabrera (.3645 BA, .545 SLG in 18 PA) and Robbie Grossman (.263 BA, .632 SLG, 2 HR in 22 PA) in particular have given Perez a lot of trouble in the past.

But as of late, their performances have been a bit more even in regards to the total. Detroit has gone 6-5 to the Over in their last 11, largely due to them allowing five or more runs in five of their last six.

Texas has also been Over-friendly as of late, going 6-3-1 that way in their last 10, as they always contribute a scoring floor. In their last 22 games, they have scored less than three runs just three times.

And given the regression we expect from Perez given his underlying metrics and the expectation for that to likely rear its head tonight against a Tigers team he’s struggled against, the Tigers should be able to chip in their fair share of runs as well.

Yes, at first glance it may look a little questionable to be backing a team with a 24-36 record going against a pitcher that possessed a 1.56 ERA prior to his last start, but after examining the matchup it makes a lot of sense - especially given the odds.

Plus, at the end of the day, the Rangers aren't world-beaters by any means. They're 29-33 for a reason and Perez is bound to regress — it may be worth fading him in the meantime while there’s still value.

On top of that, rookie Beau Brieske takes the mound for the Tigers tonight and has strung together two quality fantastic starts as of late, allowing just two earned runs (both solo home runs), ten hits, and one walk across 11.2 innings against the Blue Jays and Yankees. If he can manage a similar performance against a league-average offense like the Rangers', then the Tigers may coast to win tonight.

Plus, Brieske will be handing the ball over to a bullpen that has quietly been one of the league's best. Detroit's relief arms have managed a combined 3.11 ERA, a mark that is good for sixth in the majors. 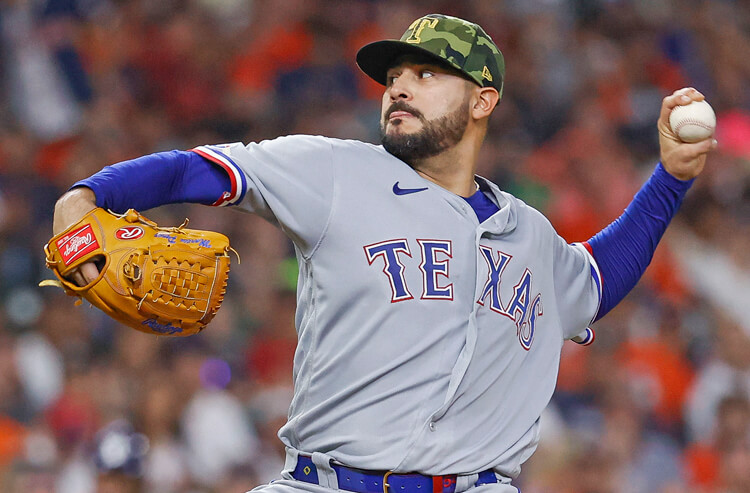 Rangers vs Tigers Picks and Predictions: Martin Comes Up Short on Mound
Provided by