The Yankees bats have gone ice cold, and shaky Corey Kluber has had his way with them historically. Our MLB betting picks are counting on the Bronx to stop dropping bombs once again, and in particular, one Gleyber Torres to stay cold at the dish.

We have the third and final game of this AL East intradivisional series with the New York Yankees hosting the Tampa Bay Rays. This is the 13th meeting between these two teams this season, with the Yankees winning seven of the first 12 matchups.

Will the Yankees take care of business once again, or can the Rays grab a win as a road underdog? Find out in our free MLB picks and predictions for Rays vs Yankees on Wednesday, August 17.

The Yankees were unveiled as consensus favorites of –120 on Tuesday morning and have since been bet up to as high as –175 before some buyback occurred, pushing the line to its current resting spot of -140. The consensus opening total was unveiled at 8 and has stayed at that number.

Corey Kluber (7-7, 4.40 ERA): Going against the ice-cold Yankees offense will be a much-needed outing for Kluber. Not only has it been a tough year for Kluber, but he has been in particularly poor form recently. Over his last five starts, he’s 2-2 with a 6.91 ERA and 1.52 WHIP. Those outings weren’t against great offenses either, as he squared off against Baltimore (3x), Detroit, and Cleveland. Kluber primarily relies on four pitches, mostly utilizing his cutter. However, most of his success comes from his off-speed pitches, which is good news against a Yankees lineup that has contact issues.

Domingo German (1-2, 4.18 ERA): Hurling for the Yankees in this matchup is right-hander Domingo German. Only pitching five times thus far this year, German’s numbers are not indicative of his performance. In his first start back from injury on July 21, German got shelled against the Astros, one of the best lineups in baseball. However, German has settled in nicely since that outing, going 1-1 with a 2.61 ERA and 1.34 WHIP across four starts. German mixes in four pitches, not relying too heavily on any of them. His most effective pitch is the sinker, with opponents hitting a mere .167 against it.

Gleyber Torres has failed to record a hit in 10 of his last 15 games (67%). Find more MLB betting trends for Rays vs. Yankees

This game features two teams trending in very different directions. Entering this contest, the Rays have won eight of their last 12 games (67%) while the Yankees have lost 11 of their last 13 (85%).I expect these trends to continue in this matchup.

On the mound, Tampa Bay is going with right-hander Corey Kluber. While it has been a rough season for Kluber, New York is a team that he’s succeeded against. Over his two starts against the Yankees this year, Kluber boasts a 0.75 ERA and 0.67 WHIP through 12 dominant innings pitched.

Through 178 career plate appearances against the Rays’ right-hander, this current Yankees lineup possesses a mere .233 xBA, .401 xSLG, and .313 xwOBA. Due to their popularity, New York is mispriced in this game as the favorite.

The Yankees have been in awful form, especially their hitting. Over their last 10 contests, New York is averaging just 2.7 runs scored and 6.6 hits per game.

Add to the fact that both DJ LeMahieu and Giancarlo Stanton are projected to miss this game, we probably will not see positive regression from this lineup.

While the Rays pitching staff should shut the Yankees down, their lineup may struggle to generate runs against right-hander Domingo German. As mentioned in the starting pitcher section, German has been dominant on the mound outside of his first start back from injury against Houston.

Additionally, this current Rays roster has struggled against German in the past. Through 35 career plate appearances against New York’s right-hander, this current Tampa Bay roster possesses a mere .225 xBA and .315 xwOBA.

Since July 1, the Rays rank just 18th in the league in SLG, 16th in OPS, and 21st in hard hit percentage when facing right-handed pitchers. Following German is one of the league’s better bullpens.

New York’s relief pitching ranks 12th in the league in ERA, 10th in BA, second in SLG, third in wOBA, and third in hard-hit percentage since July 1. Utilizing only one reliever in Tuesday’s game (Albert Abreu), the rest of New York’s bullpen should be available, including Scott Effross, Wandy Peralta, and Lucas Luetge.

Prediction: Rays/Yankees Under 8 (+100 at WynnBET)

The one play I am most confident in is for Gleyber Torres to continue to struggle at the plate. Failing to record a hit in 10 of his last 15 games (67%), Torres should be able to stay under this total once again.

Torres has struggled with his contact at the plate, producing a .247 BA this season. His metrics suggest that even more poor outings are ahead for Torres, evidenced by his .239 xBA. We should expect this poor play to continue against Kluber. While Torres has only faced Kluber five times, he possesses a troubling .130 xBA, .272 xSLG, and .169 xwOBA.

When facing right-handers this season, Torres’ splits across the board take an approximate 33% dip. 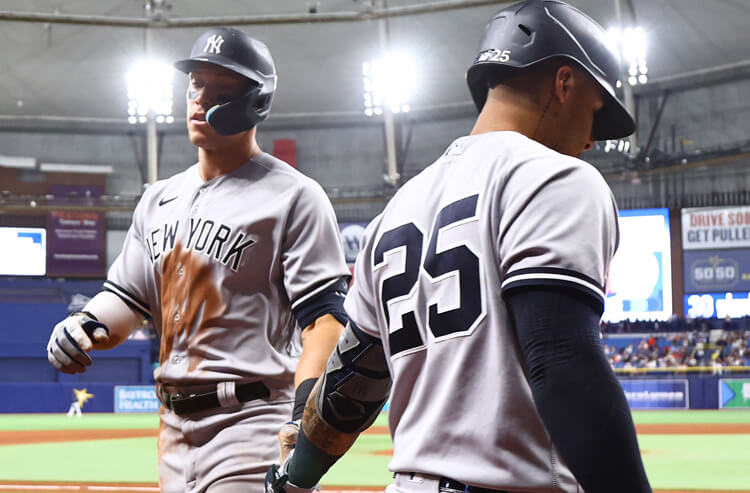 Rays vs Yankees Picks and Predictions: Pinstripes Stay Cold vs Kluber
Provided by