Milwaukee evened its four-game series with L.A. last night in an extra innings W. With the third game going tonight, our MLB betting picks are highlighting why the Dodgers should strike back against the Brewers.

The Los Angeles Dodgers and the Milwaukee Brewers will play Game 3 of a four-game series at American Family Field on Wednesday night.

The Brewers evened things up in extra innings on Tuesday night after dropping the Monday night opener of this series. Can the Dodgers regain command as heavy road favorites?

Find out in our free MLB picks and predictions for Dodgers vs. Brewers on Wednesday, August 17.

The Dodgers opened as consensus favorites of -160, but bettors have driven that line down considerably. L.A. is now listed in the -175 range at the majority of sportsbooks. The initial total of 8.0 has been bet up to 8.5 at most sites, though some 8s can still be found.

Tony Gonsolin (14-1, 2.24 ERA): After an incredible start to 2022, Gonsolin looked human in July, pitching to a 4.40 ERA. He’s bounced back in a big way in August, allowing only one earned run over his first 11 2-3 innings on the mound. This will be his first start against the Brewers this season.

The Under is 9-0 in the Dodgers’ last nine Game 3s of a series. Find more MLB betting trends for Dodgers vs. Brewers

Dodgers vs Brewers picks and predictions

The Dodgers blinked first after a prolonged bullpen battle on Tuesday night, but Tony Gonsolin should put the Dodgers in a better position to prevail in this spot.

Gonsolin owns a 0.77 ERA through his first two starts in August, rebounding from a shaky month of July (4.40 ERA). He holds an impressive .197 opponent batting average on the road this year, which spells trouble for a Brewers lineup that’s 25th in team batting average at home (.235).

Gonsolin should win his early-innings battle with Eric Lauer, who owns a 4.50 ERA and 1.31 WHIP since the start of June. Lauer — a southpaw — has surrendered 22 homers this year, tied for the fifth-most in baseball. He’ll be playing with fire against L.A., a squad that’s fifth in the majors in longballs this season.

Trea Turner isn’t known primarily as a power hitter, but he’s second only to Mookie Betts (27 homers) on his team with 18 dingers, and he’s taken Lauer deep twice in only 10 prior at-bats. Turner paces the Dodgers in OPS against lefties this season (.992).

Lauer will also have to be wary of the hot bat of Will Smith, who, despite taking an 0-for-5 last night, is batting .340 in August with a pair of taters and 12 RBI.

Trend bettors should note that L.A. is 41-11 in its last 52 overall, even after Tuesday night’s defeat. Meanwhile, Milwaukee is 1-6 in its last seven games when its opponent allows five or more runs in its previous game.

Both of these offenses can be powerful at times, but bettors should expect this tilt to be a fairly low-scoring one.

The Dodgers are still an above-average offense against lefties, but their drop from first in OPS overall to sixth against southpaws is noteworthy.

Freddie Freeman has one of the bigger drop-offs on the team in splits against righties (.963 OPS) compared to his splits against lefties (.823 OPS). Though he’s turned a corner to some extent in this series, with three extra-base hits in nine at-bats, he’s still at a modest (by his standards) .786 OPS for the month of August.

The Dodgers’ bullpen should be just as effective as Gonsolin at keeping the Brewers’ bats at bay. Caleb Ferguson (18 2-3 scoreless innings for L.A. this year) and Chris Martin (0.55 WHIP with L.A. this year) were among those that sat idle on Tuesday and should be at manager Dave Roberts’ disposal.

Several Brewers players are in a funk at the dish this month, most notably team hits leader Christian Yelich, who’s batting .167. Luis Urias (.171 average) and Hunter Renfroe (.174 average) aren’t doing much better in the same span.

Betting action has driven this total up from 8.0 to 8.5 at most sites as of this writing, but this looks like a good time to be contrary.

The Dodgers’ offense typically suffers slightly against lefties, and the Brewers’ bats are slumping at present. Both Gonsolin and Lauer should be fairly successful early. Each bullpen would then be set up ideally to keep late scoring down to a minimum.

This tilt shouldn’t sniff nine runs. Take the Under. 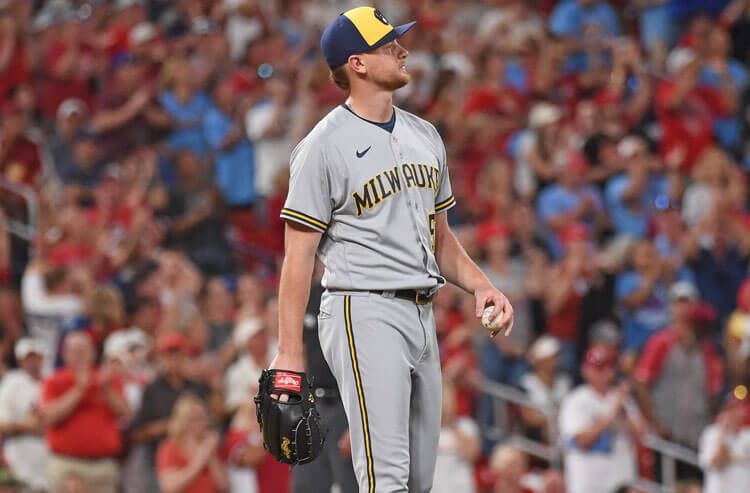